After four years, the Syrian Democratic Forces (SDF) and the YPG (Kurdish People’s Protection Units) remain the most effective forces on the ground in Syria to fight ISIS, just as in 2016 – this despite of the loss of significant territory to Turkey and the US-led Coalition pulling out from several towns in northern Syria in October last year. As a result, the SDF-controlled areas in northeast Syria remain the largest opposition-controlled territory.

The SDF and YPG were not able to achieve their main goal in marching further towards Afrin to connect the three Kurdish cantons after the ISIS defeat in August 2016. The US were opposed to the idea and told the SDF they would only support them to liberate the ISIS capital of Raqqa.

Moreover, due to Turkish fears of a Kurdish-led autonomous entity on its border and Ankara’s own territorial ambitions, President Recep Tayyip Erdoğan launched Operation Euphrates Shield. This lasted from August 2016 to March 2017, and sought to prevent the SDF from connecting Manbij to Afrin by taking territories between the two (including Bab and Jarabulus). On 20 October 2017, the SDF liberated the town of Raqqa from ISIS. However, this did not stop Turkey from launching further operations against the SDF, despite having already thwarted their plan to unite the cantons.

With Russian backing (with Moscow pulling out troops and opening up airspace to Turkey), Turkey launched Operation Olive Branch in Afrin in January 2018 (lasting until March 2018). The YPG refused a Russian offer to hand over Afrin completely to the Syrian regime and as a result, Russia allowed Turkey to attack. This temporarily disrupted SDF-US cooperation against ISIS, with the SDF redirecting troops to defend Afrin from the Turkish assault. The earlier Operation Euphrates Shield was also coordinated with Russia, as were most Turkish operations against the SDF.

Nevertheless, despite losing Afrin, the SDF continued to work with the US and liberated the last territory from ISIS in Baghouz on 23 March 2019. But this did not stop Turkey from launching another attack, ‘Operation Peace Spring’, in October 2019. The US made attempts in June 2018 – through the Manbij Roadmap and through a safe zone deal in March 2019 involving Turkey and the SDF – to prevent a further Turkish incursion. However, Turkey demanded that this ‘safe zone’ on its border be completely under its control.

As a result, despite the SDF removing fighters and fortifications from Tal Abyad and Ras al-Ain (Serekaniye), and joint Turkish-US patrols in SDF-held areas on the border, these deals did not dissuade Turkey from launching a new operation. The US was also not ready to militarily prevent the Turkish army from attacking the SDF. Turkey launched the so-called Operation Peace Spring on 9 October, after a green light from US President Donald Trump during a phone conversation with Turkish President Erdoğan. This major Turkish offensive led to the displacement of nearly 180,000 civilians.

Russia and the US were able to quickly reach separate ceasefire deals with Turkey, which limited Turkish control to an area between Tal Abyad and Ras al-Ain. This stopped Turkey’s original plan to destroy the Kurdish-led autonomous administration by creating a 32-kilometre-deep ‘safe zone’ stretching along the 460 kilometres of the Turkish-Syrian border. Turkey also wanted to relocate the 3.6 million Turkish-based Syrian refugees to north-eastern Syria, which would have completely changed the demography of the area, and may well have threatened the Kurdish presence in Syria.

The SDF also reached a deal with Damascus in October 2019 to place regime forces on the frontline facing Turkish forces and Free Syrian Army (FSA) rebels. US troops also pulled out from areas near Manbij, Kobani and Raqqa in late 2019, while Russian troops moved into these areas, as well as other borderlands. The US repositioned their forces to Hasakah province and the oil-rich Deir az-Zour. Coalition forces are today tasked with protecting oil infrastructure and continuing the fight against ISIS. As a result, the SDF stayed in control of significant oil resources, which gave them continued independence from Damascus. Moreover, one US oil company, Delta Crescent Energy, also received a waiver to modernise oil fields in SDF-held north-eastern Syria in July 2020 in a deal with a US company. So far, the company has not yet commenced operations.

As a result of the ceasefire deals, and an accord with the Syrian regime, the SDF continues to control significant territory. With a détente holding, they have not handed over territory to the Assad government, and neither has Damascus recognised the SDF or the local Autonomous Administration of North and East Syria (AANES), despite repeated failed negotiation attempts. The SDF continues to stay in control of all the area’s checkpoints and has suffered only minor defections.

Around 300 Russian military police now operate in the border area and conduct joint patrols with Turkey. Moreover, there are an estimated 4,000 to 10,000 Syrian regime forces that operate in the area. In addition, the SDF continues to control and pay the salaries of over 100,000 forces. There remain 500 Coalition troops present in the areas of Hasakah and Deir az-Zour, which has led to competition and tensions between US and Russian forces in the area due to Moscow’s continued opposition to any American presence in Syria. As such, Russia’s preferred solution is for Damascus to take full control of north-eastern Syria, without any concessions to the SDF.

However, Russia is unable to push out the US forces by military means. This has raised fears in north-eastern Syria that Russia could allow another Turkish intervention to force the SDF to make concessions to Damascus, or even push US forces further out of the area. Erdoğan recently increased his threats to invade the north-east again amidst economic trouble inside Turkey. During a recent interview on Hawar News, a senior Syrian Democratic Council (SDC) official, Hikmat Al-Habib, also expressed fears over a possible Turkish-Russian agreement that could pave the way for an attack, after Turkey withdrew from some observation bases in Idlib. As such, the future of the north-east remains unclear. However, until now the SDF and the local AANES have been successful governing this part of Syria and will look to continue, unless Turkey is allowed to attack again.

Wladimir van Wilgenburg is freelance journalist living in Erbil, Iraqi Kurdistan. He is the co-author of The Kurds of Northern Syria: Governance, Diversity and Conflicts. He tweets at @vvanwilgenburg

Dissecting the YPG: Operations and Strategies as the Defender of Rojava August 26th, 2016 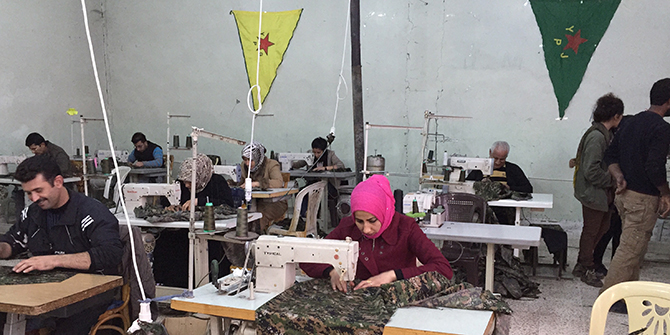 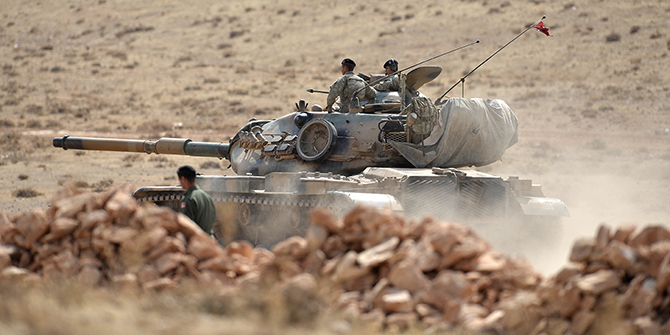 Bad Behavior has blocked 2171 access attempts in the last 7 days.