Mark Thompson of the Open Society Foundation explains why media pluralism is important and argues that at the EU level there are promises of action on this key issue.

Media are important—perhaps essential—for democracy and open society to flourish. Without independent media to question and investigate powerful institutions and individuals, provoking and sustaining debate on any issue without fear or favour, nourishing that debate with reliable information and diverse perspectives, the democratic process can be reduced to ritual. And more than this: A society’s most inclusive conversations with itself are conducted through the media. If those media do not reflect society in all its facets, all its complexity, that conversation becomes distorted and simplistic in ways that nourish intolerance.

This is why media pluralism matters. Media pluralism is about the presence of a range of voices and perspectives in media outlets available to average citizens, so they can feel that their interests are acknowledged and represented by the communication that takes place in, and through, the media.

So media pluralism is vital if media are to play their democratic role. Less clear is how best to identify, secure, and protect it. Is media pluralism a single value or an index of multiple values, a horizon or a yardstick, an ideal or an applicable standard? Is it truly elusive or will we know it when we see it (as a Supreme Court justice once said about pornography)? Can it be measured by analyzing content with stopwatch in hand? Should media pluralism be measured by competition rules, setting market share thresholds, monitoring mergers and acquisitions, defining cross-ownership levels? Or is there no strong correlation between media pluralism and the range of available suppliers (owners and producers)? Does it thrive best in a “dual system”, where public service and private sectors vie for followers under tight regulation, or is it best served by a liberalized, deregulated system?

These questions do not have single answers in theory. In practice, however, the chief threats to pluralism in a given setting may be perfectly obvious; the challenge then becomes one of finding workable and affordable remedies.

The protection of media pluralism is still needed in the European Union (EU), where standards of media pluralism are extraordinarily varied, encompassing—as the EU does—some of the most stable and mature democracies in the world, along with countries that are still wrestling with the legacy of brutal totalitarianism, like Romania, and notorious anomalies like Italy.

You would expect the institutions of the EU to support media pluralism; and so they do, but not in a straightforward way. The EU speaks about the media with several voices, not always in harmony. Principles concerning the rights and responsibilities of the media in democratic societies are addressed in the grand language of the treaties, including the European Charter of Fundamental Rights, which states at Article 11 that “The freedom and pluralism of the media shall be respected.”

The problem with the EU’s approach to media pluralism is fundamental: European Commission rules protect our rights as consumers, but not our needs and rights as citizens to properly informed public debate. Consider, as a litmus test, the independence of media regulators—a fundamental standard that the Council of Europe has repeatedly called on member states to respect. When the Commissioner for Justice and Fundamental Rights proposed to make the independence of media regulators obligatory under the Audiovisual Media Services Directive (AVMSD), she found herself opposed, not just by the usual suspects but by 24 out of 27 member states.

Yet policy making in Brussels cannot be insulated from citizens and their concerns about the media, partly because of those treaties, and partly because the EU institutions are open to member states’ pressure. A few years ago, one could have said that the Commission did not rebuke member states over their performance in respect of media “freedom and pluralism.” This is no longer true: the Hungarian government’s determination since 2010 to ride roughshod over international standards of media freedom and pluralism provoked the Commission to react.

At the same time, technological convergence has made it inevitable that the EU (which evolved a comprehensive regulatory framework for telecommunications) would be drawn more deeply into audiovisual regulation than it might wish. This tension is felt most acutely inside DG Connect, the directorate involved with media, which is most responsible for media pluralism and freedom.

In this context, members of the European Parliament (MEPs) have sensed an opportunity. MEPs have a record of sensitivity to media pluralism and readiness to criticize states’ treatment of their media. They have issued exhortations and rebukes, tackling critical situations in this or that member state, provoking useful debate around disgraceful behaviour.

Although the Parliament has no law-making powers, its calls for action to protect media pluralism achieved a breakthrough in 2007, when the Commission announced a “three-step approach” to media pluralism. More recently, in further concessions to MEPs’ demands, DG Connect established a High-Level Group on Media Freedom and Pluralism to make “recommendations for the respect, protection, support and promotion of pluralism and freedom of the media in Europe.” And it set up a Centre for Media Pluralism and Media Freedom to “improve the protection of media pluralism and media freedom in Europe and to establish what actions need to be taken at European or national levels to foster these objectives.”

At the same time, a new EU instrument called the European Citizens’ Initiative (ECI) opened the way for civil society campaigns to propose topics for European legislation. One of the first initiatives is a campaign for media pluralism.

Finally, the European Parliament’s Committee on Civil Liberties, Justice and Home Affairs has grasped the chance to influence the Commission at this fluid moment, by drafting a report on “standard settings (sic) for media freedom across the EU.” The draft, couched in refreshingly direct language, calls for joined-up action by the EU, the Council of Europe, and the OSCE “to respect, guarantee, protect and promote the fundamental right to freedom of expression and information, and media freedom and pluralism.”

By itself, none of these developments would signal a breakthrough in European media policy-making. Taken together, they mark out the present moment as the most promising ever for media pluralism in European policy-making.

This post first appeared on the Open Society Foundation’s website Drawing on the Mapping Digital Media research into digitization and new media, a new report from the Open Society Media Program and a paper in conjunction with Access Info discuss media pluralism in Europe. 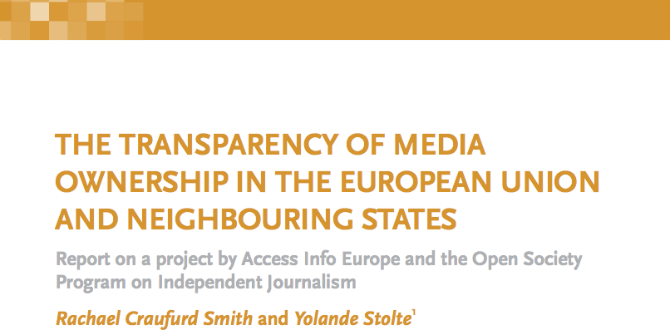 What is a Quasi-Judicial Decision?

Media Plurality Series: Why is the EU not Protecting Plurality?