In the latest post in our Alternative Internet(s) series, Argyro Karanasiou, Lecturer in IT & Media Law for the Centre for Intellectual Property Policy & Management (CIPPM) at Bournemouth University argues that policymakers must embrace decentralised Internet architectures as a way of breaking online informational monopolies.

Back in 1967, computer network pioneer Paul Baran described network communications as an unregulated public utility and foresaw how a centralized net structure would raise major legal issues in the absence of any regulative framework:

“We are moving headlong into an era when information processing will be available in the same way one now buys electricity. But the attributes that distinguish heterogeneous information from the homogenous products distributed by the earlier utilities demand a fresh regulatory approach- one that would serve technological progress, privacy, and the public interest. We may wish to think of it as tomorrow’s problem; but it is already here”.

For these reasons Baran highlighted in his work the importance of keeping a decentralized architecture online, as the most preferable means to facilitate the communicatory needs of users using a “time sharing” system, namely a system based on shared resources. In the intervening years there has been a growing tendency to centralize online communications leading to information monopolies and resulting pushback, the latest example being the recent European Parliament vote to put an end to Google’s alleged online monopoly.

In the aftermath of the Snowden revelations, users have started to push for more transparency and control of their data, seeking to achieve this through encryption and restoration of the decentralized architecture that once was the norm online. The idea of constructing networks that abolish intermediaries and put the users in charge of storing, routing, providing bandwidth and managing the network themselves is very appealing, and several notable examples already exist.

The Verrua Savoia internet experiment by the Polytechnic University of Turin, Italy speaks volumes about how a bottom-up, decentralized approach can provide sustainable solutions in terms of internet connectivity. A simple network with the city hall as its central hub and several routers distributing the internet to five access points spreading across the area, achieved what both the state and the private telecom companies failed: a 20-megabit internet connection. Working around a central hub, the network itself does not follow a distributed architecture however, as of 2015 its administration will be passed to the residents themselves, taking any intermediaries out of the equation.

The growing tendency to embed decentralization in online communication systems is not only obvious at the network management level, however; it is also regarded as an alternative means of structure that empowers users and allows them to protect their privacy online. This can best be seen in decentralized projects such as ArkOS and MaidSafe, which move away from the traditional centrality currently dominating the cloud: users no longer rely on centrally owned data centers.

Such examples highlight a growing tendency to trace back the root of online networks to Baran’s time-sharing paradigm built as a decentralized system of shared resources, managed by the users. There seems to be some disagreement as to whether decentralization in itself without legislative support is a sufficient means of accessible and privacy-friendly online communications, but there is a lack of net architecture related policies.  This can be attributed to the fact that the law mostly assesses the sustainability of online communications through the lens of competition: as with media pluralism, decentralization is regarded as a means of restoring competition in the digital marketplace. A rights-based approach, on the other hand, would assess online communications through the lens of public sphere, taking into account the user perspective; thus, decentralized networks and the subsequent online diversity would be viewed as a good in themselves.

In the European Union there is a fuzzy conception of media pluralism: after the 1992 failed attempt to harmonize media plurality measures among member states, this became a matter of national competence; anything else at a European level is dealt with through competition laws. This approach, however, seems to be premised on a flawed assumption that is also shared in the US:  the concept of media diversity is a narrow one, which ignores the element of exposure diversity. In other words, diversity is measured with respect to the information made publicly available, rather than according to the user’s consumption. In treating the user as a passive consumer, this approach simply presents the policymaker with the task of securing a wide range of choices. This might reinforce competition in the market, but it completely overlooks the user’s communicatory needs and rights, which go beyond the passive consumption of information.  Ultimately, it is suggested that a fresh approach based on user empowerment should be adopted to widen the scope of media pluralism.

In the same vein, decentralization, as a manifestation of user empowerment, could be seen as an indicator of pluralism online, highlighting a user-centric perspective instead of the current market-centric one.  This is not the first time that community joins in as a third sector of communications along with the state and private, commercial entities. Autonomous and independent community media outlets provide us with a great example of how diversity is aided through user empowerment.

If decentralization remains outside the purview of public policy at large, it risks marginalisation as an infrastructure supporting a darknet, which could facilitate illegal online activities beyond the control of a central hub. In a rapidly centralised cloud environment, it is not enough to simply kick the clouds away. It is imperative that decentralisation is further embraced by policymakers as a complementary means of breaking online informational monopolies built on user empowerment and autonomy.

Otherwise, we might as well be building on thin air… 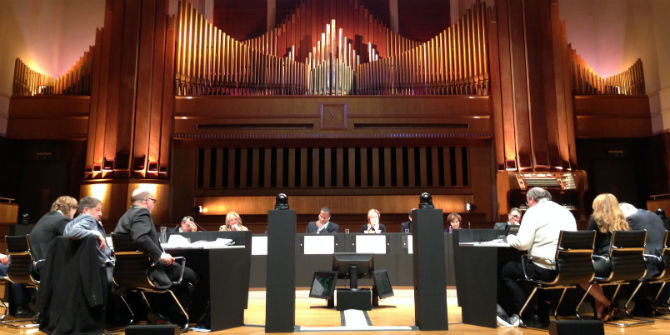