Media freedom has come a long way in Africa, but it’s still precarious

Media freedom has come a long way in Africa, but it’s still precarious

Tawana Kupe, Deputy Vice Chancellor and Associate Professor in Media Studies at the University of the Witwatersrand, examines the increase of media freedom in Africa and highlights some obstacles still to be overcome.

Reporters Without Borders’ latest World Press Freedom Index shows two interesting things. Namibia, ranked number 17, has the most improved press freedom environment in the world. And Africa, with the exception of North Africa, came second in rankings on the most improved media environment since 2015.

Namibia’s rise in this ranking is stunning. Among the 180 nations that were ranked, it places the country close to the top-ranked Scandinavian nations, including Finland at number one, Netherlands (two), Norway (three) and Denmark (four). These countries also feature in the top five positions on the United Nations Index on Human Development.

Among African nations, Namibia ranks higher than South Africa (39), the country with the best constitutional protections for media freedom, and arguably the most extensive media infrastructure on the continent.

Indexes of the performance of nations on various indicators are growing in importance. But they should not be taken as the definitive indicator of the state of press freedom in any country or region. The situation in every newsroom – or an individual journalist’s circumstances – can be worse than the ranking of a particular nation.

Interestingly Namibia is the home of the 1991 Windhoek Declaration on a Free, Independent and Pluralistic Press. It was followed ten years later by the African Broadcasting Charter calling for a pluralistic and diverse broadcasting system in the public interest. The Windhoek Declaration is the reason why May 3 was declared World Press Freedom Day by the United Nations.

But a historical perspective provides better insight on the state of media freedom and its role in Africa today than rankings or indexes.

At the time of the Windhoek Declaration in 1991 most of Africa, including South Africa, was only starting on a journey towards improved media freedom. This, after decades in which one-party states, military regimes and the then apartheid regime had committed some of the worst violations of media freedom ever to be visited on journalists and the media.

Among some of the worst violations were routine arrests, detentions, imprisonment, killings and the exiling of journalists. Along with these were the bombing of printing presses, closure of critical media houses and state control of the broadcasting system and its regulation. Draconian laws were also passed preventing the normal functions of journalists.

Lighter versions of the same violations were also evident in the few African countries considered democracies because of their pluralist politics. Examples include Botswana. In fact Africa was known in the 1970s and 1980s as the continent that jails its journalists. But it did not have a monopoly. Asia and Latin America shared the same dubious distinction.

In most countries privately owned media that were editorially independent from state control were often fewer and smaller than state-run print media and news agencies.

By the time the African Charter on Broadcasting was adopted in 2001, the state of media freedom across the continent appeared to have experienced a sea change. But it is also true that some countries had experienced some deterioration.

For example, Zimbabwe had entered a period of political crisis, leading to a media management regime that included registration of journalists and media houses, arrests of journalists and the continued monopoly of the state broadcaster, as well as closure of a privately owned daily newspaper.

In the 1990s, as pluralist politics characterised by multi-party elections took root across the continent, a trend developed to license privately owned FM radio stations and television channels. Privately owned newspapers and magazines emerged. Online media also sprang up as Africa was connected to the internet and there was a hype that the future lay in digital or new media that was not easy for governments to control.

The competition between state and privately controlled media expanded the space for media freedom. In this context media were better able to strive to become independent sources of information and analysis. They could broaden public debate and dialogue, engage in investigative journalism as a watchdog of the public and give a voice to a wider range of people beyond government elites.

For the first time it felt as though the vision of the Windhoek Declaration and the African Charter on Broadcasting could be realised.

This nascent pluralism and vibrancy in which some media exposed corruption and misgovernance gave hope that the African media would now play a vigorous watchdog role that would usher in an era of accountability necessary for democratic governance.

Push back and hostility

The 15 years since 2001 have been characterised by a growing trend towards respecting the freedom of the media and expanding spaces for freedom of expression. But the trend hides many contradictions, some of which are identified in the World Press Freedom Indexes.

There is definitely some push back by governments. Despite the end of the era of legislated one-party rule, some leaders are reluctant to leave power. In these efforts to retain power against democratic norms, journalists and the media are casualties. Burundi is a recent example that has been cited in the Word Press Freedom Index.

There is also a general hostility towards media’s attempts to probe and hold public officials to account. Politicians and public officials are often uneasy with regular engagement and requests for information. A culture of secrecy is still dominant and in some cases media legislation restricting access to information is still retained in the statute books from the colonial or apartheid eras. New legislation meant to promote access is often too cumbersome to use by journalists or carries new ways to restrict access.

Even private ownership has not necessarily come with the editorial and programming independence from owners and advertisers. Commercial pressures place constraints on journalists and editors trying to serve the public interest.

Part of the problem is that the new owners are often politicians or politically linked individuals or groups wishing to promote their own interests or curry favour with governments for commercial gain. Cross ownership across many economic sectors by owners can also create taboos on what can be reported.

A factor that limits media freedom often not discussed much in Africa is the effect of weak economies. Weak economies undermine the viability of a media dependent on commercial advertising. They also open up the media to editorial and programming influences that undermine their independence. In such situations large companies that dominate or have a monopoly wield power that has a deleterious effect on media content.

A culture of unethical journalism including “cheque book” journalism – where journalists are bought to, for example, smear opponents or divert the public from serious issues – has also crept in. It reduces the credibility that media ought to enjoy with the public. Independent regulation of journalistic ethics is necessary to arrest this trend.

Arrests, temporary closures of media, even online media, and harassment of journalists are not yet things of the past. In some countries like Eritrea, the country at the bottom of the index at 180, being a journalist is an occupational hazard of the worst kind. Five bloggers and journalists were held in jail for a lengthy period in Ethiopia until July late last year. Licensing regimes are not yet in the hands of independent public-interest bodies as the Charter on Broadcasting recommended.

Media freedom and freedom of expression in Africa is expanding. But we have not yet reached a stage where it is irreversible. Although the role of the media in creating an informed citizenry eager to participate in decision making is increasing, the situation in Africa remains precarious. 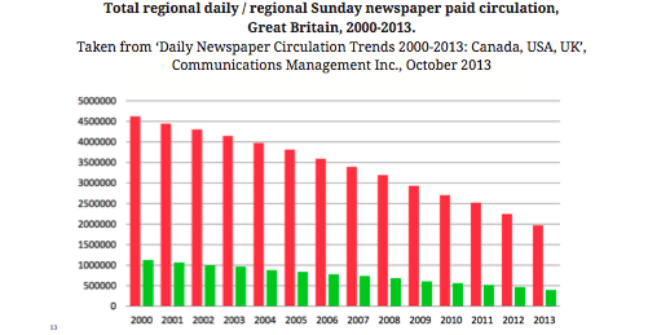