Facebook has recently come under significant scrutiny for its perceived role in the US election as a conduit for fake news and hate speech, and is currently advertising for a head of news partnerships, presumably intended to tackle such issues. As Facebook has always maintained that its is a platform rather than a media company, it is difficult to hold it responsible for the content it hosts. Leighton Andrews, Professor of Public Service Leadership and Innovation at Cardiff Business School, a former Welsh Government Minister, and a former head of public affairs at the BBC, argues that the social network and its fellow tech giant Google should be regulated at an EU level.

Over the weekend, Facebook sent me a link to a video they had made of my activity on their site over the last year. To my mind, that was more proof, if any were needed, that Facebook is a media company, despite all its protestations.

A study by Enders Analysis last month found that Facebook and Google accounted for 90% of the growth in UK digital advertising in 2016. Earlier studies have shown the duopoly accounting for up to 85% of US digital advertising revenues. Even though Facebook recently found itself under pressure after admitting it had miscalculated its metrics it seems unlikely advertisers are going to give up on these platforms. The ad revenue of old media has declined in direct proportion to the growth of ad revenue for Google and Facebook.

As well as their dominance of advertising, the two ‘titans’, as Professor Diane Coyle calls them have become the dominant news distributors as well. 44% of US adults get their news via Facebook according to the Pew Research Centre having taken over as the top news referrer from Google in 2015 according to the traffic analytics site.

Facebook and Google are now the dominant media powers in the world. Up till now, they have resisted being treated as media companies despite the sheer and unparalleled power they exert. They argue that they are widening the base of user-generated content and its distribution, bringing communities together, providing platforms for media companies to reach new audiences, and are thus promoting competition. Well, they are now of such a size that it is impossible to argue that their dominance does not raise worrying issues about media pluralism. There is a wide and growing range of other media organisations, civil society activists and academics who believe that media pluralism is under threat, that there are new issues of power, concentration and dominance not adequately captured in existing competition rules or tests, and that action is needed. The immediate forum for that action, ironically given 2016’s events, is probably the European Union and its Digital Single Market agenda.

What is needed is the necessary a strategic alliance between other media companies, civil society organisations and academic specialists to drive an agenda forward to address the powers of internet intermediaries, in terms of content rules, competition issues and their dominance of the advertising markets which as we have seen has had the effect of undermining the newspaper industry in particular. There also needs to be consensus on key planks of any legislative initiatives. My worry is that other media companies may be more concerned with the deals that they can strike with the dominant internet intermediaries: or may be that there is nervousness about a legislative approach which could be counter-productive, such as action taken in Spain to impose copyright on Google News which simply led to Google News ceasing to operate there.

Twenty years ago I was the BBC’s head of public affairs. The BBC and other free-to-air broadcasters were concerned about the emerging digital platforms and their potential controls of access to new digital services: along with others, we set in train a campaign on conditional access systems which resulted in the European Parliament, with its new co-decision powers under the Maastricht Treaty, and using the new Maastricht-granted responsibility for the EU to intervene in the field of culture, agreeing amendments to the Television Standards Directive which passed into law despite being opposed by both the UK Government and the EU Commission. These granted all broadcasters access on ‘a fair, reasonable and non-discriminatory basis’ to TV decoders and platforms. Subsequent campaigning delivered amendments to the recitals of the 1997 TV without Frontiers Directive in respect of public and private free-to-air channels’ access to decoders and also recognition of the need to protect public access to major sporting events. At the same time there was a successful campaign to drive forward protections for public service broadcasters in the Treaty of Amsterdam.

Now, it is certainly more complicated lobbying in an EU of 28 member states, than one of twelve or fifteen. But action is needed – and sometimes the process of making legislation, messy as it is, is as important as the passage of it. Indeed, the threat of legislation can sometimes change the behaviours of dominant players.

So let me make a few suggestions. First, I wholly support the idea that at a national level  there needs to be remedial action, such as a levy on internet intermediaries’ revenue (effectively on advertising income) to support plurality in media, as suggested by the Media Reform Coalition. This underlines the case for endorsing EU Commission proposals to empower national regulators to impose levies on online platforms targeting their countries.

Second, we need some form of confidential independent regulatory scrutiny of proprietary data, including that held by Internet Intermediaries, as suggested by Tambini and Labo: this is as important to the interests of advertisers as it is to news outlets themselves: there is industry cooperation to collect TV and radio data, so why not internet data?

Third, we need to begin a more serious debate on algorithmic accountability. The impression is sometimes given that this is an area which is too challenging to regulate. In fact, regulation is entirely possible. It simply requires the relevant technical expertise – and political will.

My fourth proposal would be legislative action to consider imposing ‘due prominence’ – a concept developed in respect of electronic programme guides on digital television – for material produced by genuine originating news organisations in Facebook’s News Feed and similar systems, which would ensure as a minimum that the branding of the originating news outlet is incorporated within the Feed rather than the situation, as at present, where Facebook re-brands everything to fit its own standard.

Finally, there needs to be effective recognition that certain Internet Intermediaries or Online Platforms are media organisations and should at least carry responsibilities in respect of protection of minors and prevention of hate speech. That requires an extension of the scope of the revised Audiovisual Media Services Directive and a clear definition of specific Internet Intermediaries. It may be that another legislative route would be to revise the e-Commerce Directive, which, as the European Commission noted in its Communication on Online Platforms ‘was designed at a time when online platforms did not have the characteristics and scale they have today’.

Moving forward, there needs to be a coordinated and sustainable lobby at a European level, involving media organisations, advertisers, civic society organisations, and academic specialists interested in media policy to create the space for legislative action

Assuming Brexit goes ahead, and the UK does want a relationship akin to the EEA, then it’s likely it will have to adhere in practice to EU Media laws. EU legislation may be our last, best hope for effective action. There’s a thing.

This article was first published on OpenDemocracy UK and is reproduced here under a Creative Commons license. This post gives the views of the author and does not represent the position of the LSE Media Policy Project blog, nor of the London School of Economics and Political Science. 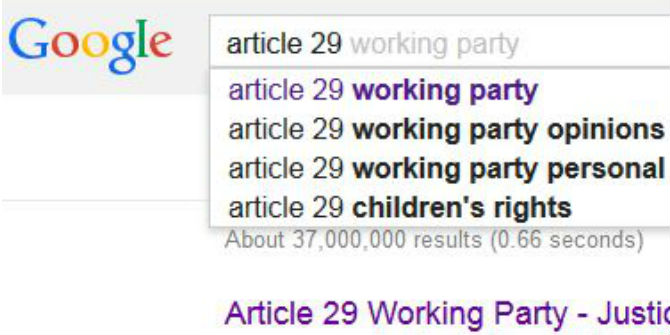 A very brief history of interception