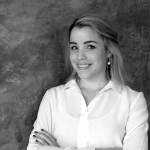 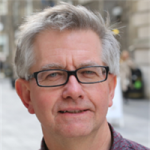 In late 2019, LSE’s Professor Nick Couldry, together with Ulises A. Mejías from the State University of New York, published a book titled The Costs of Connection: How Data is Colonizing Human Life and Appropriating it for Capitalism (Stanford University Press, 2019). For the first post in a three-part series, LSE PhD researcher Anri van der Spuy interviewed Nick Couldry in order to introduce the notion of data colonialism and why he believes policymakers and data subjects alike urgently need to face up to some uncomfortable truths about our relationship with data today. The second post will examine the notion of data colonialism and its impacts for inequality, with reference to digital inequality in the global South, while the final installation (part three) will feature a Q&A with Ulises Mejías.

With the current coronavirus (COVID-19) crisis forcing more and more universities, schools and businesses to close around the world, we are likely to do much of our teaching, schooling and working online in the next few weeks or months. Many have lauded the Internet’s ability and contribution to mitigating the societal, economic and even cultural repercussions of the virus. Putting aside important issues about social isolation given the existence of various digital deserts (e.g., the impacts of moving classrooms online for children who lack Internet access at home), The Costs of Connection compels us to ask more fundamental questions about the long-term costs of moving every aspect of our lives online – at least based on an online infrastructure constructed, as it is today, around data extraction. 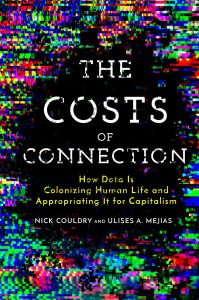 Prodding people towards online ‘solutions’ during a global pandemic like the coronavirus is perhaps unsurprising given that the default model of capitalism today is seemingly a world of online convenience built upon the foundations of seemingly inevitable processes of data collection. Couldry explains that capitalism today is driven by the assumption that access to masses of data is a business and economic imperative. As a result, ‘human experience, potentially every layer and aspect of it, is becoming the target of profitable extraction.’[i]

If we ourselves have become the targets of expropriation, what’s at stake? Attempting to address this question, concerns about our relations with data and data barons have become more widespread over the past three to five years. Many of these critics have focused on certain aspects or impacts of data relations; prodding the ways in which data extraction can discriminate against society’s most vulnerable through the automation of inequality; or criticising one type of contemporary capitalism which provides ostensibly ‘free’ services while monitoring our behaviour in extraordinary detail (i.e., surveillance capitalism – a notion popularised by Shoshanna Zuboff in her acclaimed 2019 book).

While interrogating selected aspects of capitalism in contemporary platform societies, most of these critiques tend to assume that ‘the rest of capitalism is fine’, Couldry points out. So while such accounts have been inspiring, he feels that they might risk focusing on isolated symptoms rather than underlying causes – or the ‘true audacity of what’s going on with data today’. He explains that once he and Mejias had taken the time to study the problem as a whole, they realised it’s not just a rogue aspect of capitalism that is involved (e.g., surveillance capitalism), but something much more fundamental and difficult to respond to or resolve:

Our argument is that the whole body of capitalism is now being pathologized by a new form of colonialism.

With data collection becoming ‘the default model of capitalism’, the scope of what’s going on, he argues, ‘really affects every aspect of capitalism’. And what’s going on with capitalism today, they write, is ‘the capture and control of human life itself through appropriating the data that can be extracted from it for profit’.[ii] It is thus impossible to separate capitalism from colonialism today. Indeed it never was, since capitalism only became possible on the basis of the riches of historic colonialism.

Is colonialism repeating in a new guise?

In 1950, Carl Schmitt[iii] wrote in the preface of his book, The Nomos of the Earth, that colonialism was ‘an unrepeatable historical event. Only in fantastic parallels can one imagine a modern recurrence, such as men on their way to the moon discovering a new and hitherto unknown planet that could be exploited freely to relieve their struggles on earth’.

But what if such a planet was closer than we thought? Couldry says that The Cost of Connection compels people to ask whether colonialism is in fact renewing itself despite Schmitt’s prediction, whether today’s data colonialism is not expropriating the ripe raw material of ‘the planet of human experience’. As under historical colonialism, data colonialism functions by acquiring ‘large-scale resources from which economic value can be extracted’. They explain in the book:

If historical colonialism annexed territories, their resources, and the bodies that worked on them, data colonialism’s power grab is both simpler and deeper: the capture and control of human life itself through appropriating the data that can be extracted from it for profit.

If the territories of the new data colonialism are you and me and our very bodies as generators of data, who and where are today’s Dutch East India Companies (as perpetrators of data colonialism)? While many of the aforesaid critiques of capitalism tend to focus on the role of digital giants primarily based in Silicon Valley, Couldry feels that we need to think more broadly, and pay attention to the role of China in particular. He notes that his students at LSE made him particularly curious about ‘the astonishing things’ that are happening in China around data, social credit and platform surveillance. Supported by research from a former LSE colleague, João Carlos Magalhães, The Cost of Connection therefore explores China’s role in ‘a bigger transformation’ as far as data colonialism and power are concerned.

Given the ‘uncomfortable’ nature of the data colonialism thesis, Couldry is cautiously optimistic of the possibility of still challenging the prevailing ‘logic’ of data colonialism. He believes the agenda of data barons of today – whether situated in Silicon Valley (US), Silicon Savannah (Kenya) or Zhongguancun (China) – can be challenged only if we invent a new language; a language which enables us to ‘completely change the nature of the debate about data in today’s free societies’, through the powers of our collective imagination.

In the next installation of this series (coming next week), we explore why challenging this logic is especially important given the fact that data colonialism – like historical colonialism – has unequal repercussions and impacts in different parts of the world. Using an example, the popular #datamustfall campaign in South Africa, the notion of data colonialism will be explored with reference to inequality in the global South.

[iii] In quoting Schmitt here, we are by no means supporting or endorsing his views on colonialism or politics more broadly. But Schmitt’s clear-eyed view of what he saw as the “tragic” failure of historical colonialism and its deep logic remains illuminating, as Benjamin Bratton (The Stack, 2016) and others have noted.