In British politics we have recently seen proposed tax hikes for the rich, and an increasing focus on reducing inequality. Personality is one of the factors – just like socio-economic status, education, religiosity and union membership –  that can help understand why citizens differ in their support for issues of redistribution and progressive taxation.

Previously, personality traits have been associated with voting behaviour (here & here) and political attitudes. My research suggests that there is an association between personality and economic ideology, i.e., citizens’ support for economic policies such as redistribution and taxation. Moreover, I show that some of these associations are weaker among citizens with a low income compared to citizens with a higher income.

I draw upon three large datasets, namely the 1958 Child Development Study in the U.K., a unique study of Danish citizens (2010-2011) and the American National Election Studies of 2012. In all three studies economic ideology was measured using questions such as “Income inequality is too great in this country—the greatest pay raise should be given to low-income people” and scored on scales ranging from 1 (agree completely) to 4 (disagree completely).  The Big Five personality traits – agreeableness, extraversion, openness, conscientiousness and neuroticism – are measured by asking respondents to rate themselves on a set of characteristics. Agreeableness, for instance, is measured with an index using items such as “I have a soft heart” which participants answer on a scale ranging from “Very Inaccurate” (1) through “Very Accurate”(5).

I draw upon research on the psychology of scarcity to support the expectation that low income weakens these associations between personality and economic ideology; poorer people must direct their attention to their most immediate needs, while wealthier people are capable of moving beyond these immediate needs. Mullainathan and Shafir explain that compared to rich people, poor people focus their attention more—meaning that they pay more attention to that which is scarce—and poor people tunnel their attention—meaning that they reduce attention to all other things in their environment. People with a high income do not experience these restraints. Therefore, I expect that low income reduces the strength of association between personality and economic ideology.

In order to test this expectation, I looked at the relationship between each personality trait and income (using statistical interactions). Figure 1 plots whether income weakens the association between agreeableness and economic ideology in the U.K. The solid line is the marginal effect of agreeableness on economic ideology and the dashed lines are the 95% confidence intervals. The histogram on the bottom shows the distribution of income from the lowest observed income (0) through the highest observed income (1) among the respondents. In these analyses economic ideology is scored from left (0) to right (1).

What Figure 1 shows is that the negative association between agreeableness and economic ideology becomes stronger as income increases; but for those on a lower income this association is weaker. In other words, for richer individuals there is a strong relationship where the more agreeable, the more left-wing (and the less agreeable they are, the more right-wing their economic ideology). However, for poorer individuals, this relationship is weaker. In Denmark and the U.S, I find similar evidence that the association between agreeableness and income is attenuated by income.

Figure 1: Association between Agreeableness and Economic Ideology over the range of Income in the U.K. 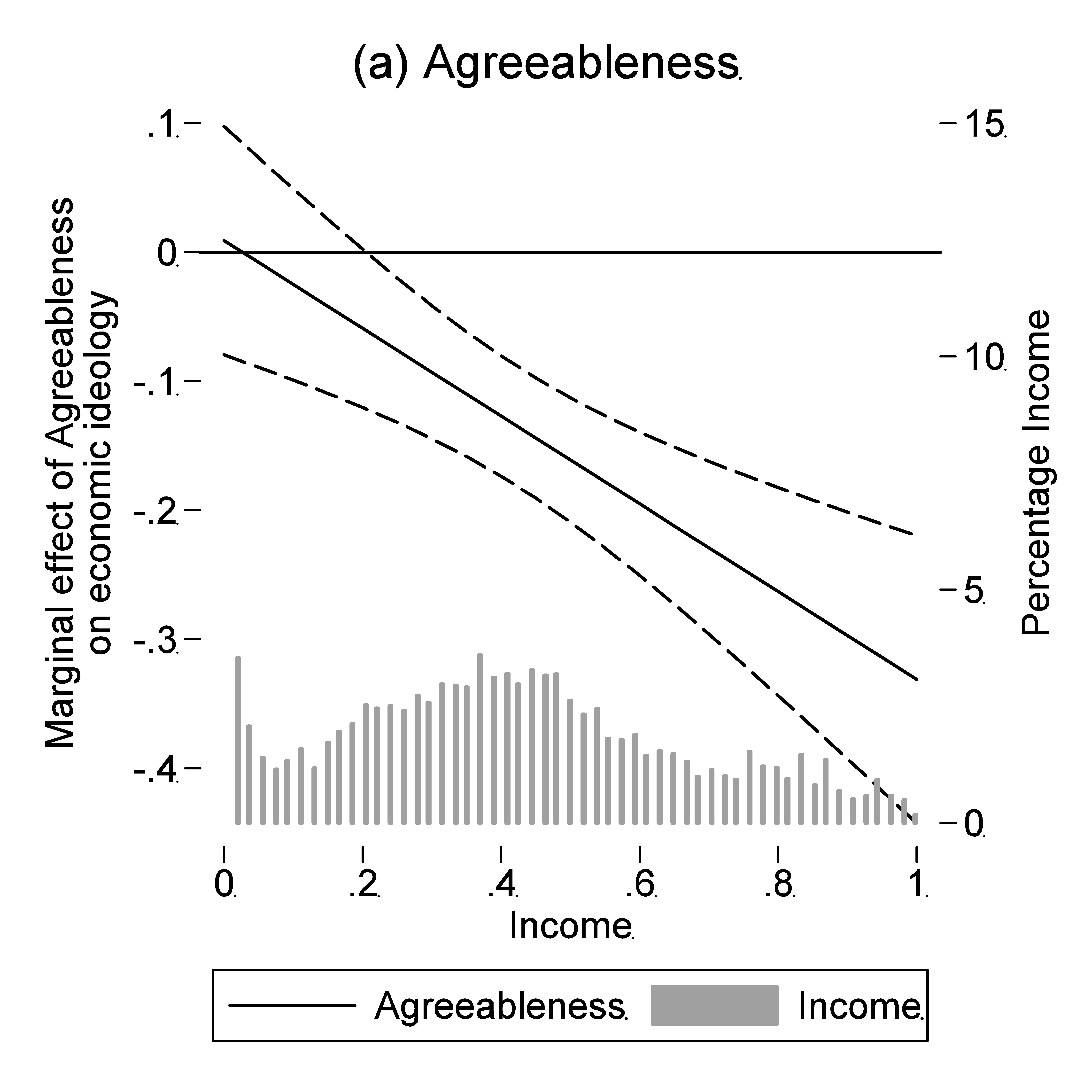 For the other traits the pattern is less consistent across the studies. In the U.K, income weakens the association between extraversion and support for redistribution, in Denmark this is the case for openness, while in the U.S. this is the case for neuroticism. These differences might be explained (a) by the fact that the measurement personality and economic ideology is slightly different in each sample, or (b) there might be contextual differences that explain why attenuation is observed in some but not other contexts.

This implies that politicians, pundits and policy makers should realize that individual differences in personality matter for politics. An agreeable person might be more susceptible to a message that stresses the urge to care for other people compared to a less agreeable person. In order to effectively communicate their policy stances, they should consider tailoring their rhetoric to the psychology of their citizens. Moreover, this study offers a first indication that income might condition the importance of personality for your economic ideology.

Note: This blog is based on the findings from a forthcoming study in Political Psychology (ungated here).

Bert Bakker is an assistant professor of political communication at the University of Amsterdam. His research is about the psychological underpinnings of political attitudes and behaviour. Twitter handle: @bnbakker

Leading or following: Data and rankings must inform strategic decision making, not drive them

Willetts u-turns on paying for university places, the Lib Dems are still unhappy, and the coalition turns one: round up of political blogs for 7 May – 13 May