The United Kingdom is a democracy, but nonetheless has an unelected and hereditary Head of State in Queen Elizabeth II. Eventually, she will give way to her son, Prince Charles. Richard Ridyard argues that this state of affairs cannot be justified, and that the continuing presence of a monarch – particularly an influential one – is incompatible with democratic maturity.

The spectacle of the Scottish independence referendum was an occasion for a long-postponed national debate. It was an opportunity secured by a campaign, full of vigour, that challenged the assumptions of the present system. Voters, however, remain ballot-deprived of at least one other question with epoch changing properties: should we have an elected head of state?

Republicanism is yet to hit the sort of peak of interest the Scottish independence movement has. And if it is to do so many obstacles must be leapfrogged. Section 3 of the Treason Felony Act 1848 makes it a criminal offence to advocate the abolition of the monarchy in print, even by peaceful means. The maximum sentence? Life imprisonment. Prosecution is unlikely (the last reported case in the United Kingdom was in 1883) but the fact that it continues to feature in the statute books, despite the Guardian’s legal challenge, hints at a reluctance in Westminster to do anything that could give currency to republicanism. Probe a little deeper and it becomes clear that the present system is tailored to the preservation of the institution of monarchy. Before a member of parliament can take their seat they must first swear an oath of allegiance to the British monarch — a sobering reminder that palace politicians serve not their constituents who democratically elect them, but the crown.

The stalling of republicanism in recent years can also be explained by the widespread belief that the monarchy is too popular to disband. With a little reflection it becomes evident that its popularity is not as unanimous as it may seem. “90% of Brits think the Queen is doing her job well” read the headline after Ipsos MORI executed an opinion poll one week after the Queen’s jubilee. This astonishing finding came after a mere 1,016 adults were interviewed by telephone. Sample size isn’t the only cause for scepticism. Much depends on what interviewees interpreted the Queen’s job to be. Come the jubilee, not everyone got swept up in the blizzard of excitement. During the river pageant and jubilee concert, an average of 44.1% and 42.6% of the available audience weren’t tuned in, respectively.

The “royal” theme, observed Christopher Hitchens, operates with the intensity of Gresham’s law in the media sector. Glamourised by its media cheerleader, the monarchy has stood under a Niagara of favourable publicity. It is a form of mental conditioning; engendering the growth of an unhealthy fascination with the Windsor clan, which involves leading vicarious lives. Open a newspaper whenever the pampered family graces subjects with their presence and the deference shown to them is extraordinary. This fascination is not exclusive to the UK; it is a cultural export keenly embraced by media outlets around the globe.

Raising a question mark against the monarchy is considered, by some, indecorous. And should someone object to the baptism of cheap emotion, elements of mob feeling begin to surface. When Labour London Assembly member, Tom Copley, refused to lose his head over the birth of Prince George there were calls for Ed Miliband to disown him. The failure to debate the merits of the monarchy is replete with Copley-like moments. Such servility promotes the idea that we are living in a one party state.

Some view the monarchy as merely symbolic, even benign. But symbolic of what? The monarchy has become the exemplary face of inequality, investing ideological credibility in the idea of the class system. This is far from harmless. It is easy to intuit a link between the preservation of the monarchy and the survival of the aristocracy. The gap between the classes remains a chasm. More than a third of English and Welsh land is owned by just 36,000 aristocrats. As for the Crown Estate, it ‘owns’ 358,000 acres, worth more than £6.6 billion. Social mobility collapses under the weight of entrenched elitism. According to OECD and All Parliamentary Group on Social Mobility reports, Britain has some of the lowest social mobility in the developed world.

Last year came news that makes a difference to the case against disbandment. Believers of the “purely ceremonial” line had their eyes opened to the Queen and Prince Charles’s recondite veto powers when Downing Street lost its battle to keep them hidden from public view. According to the internal Whitehall pamphlet, at least 39 bills have been subject to royal consultation and consent. Issues to have received royal scrutiny include: the Iraq war, civil partnership, higher education, and identity cards. The revelation accompanies John Major’s confession that he sometimes changed policy following his weekly meeting with the Queen. There is a perceptible deficit of democracy. ‘The prime minister appoints and sacks government ministers without needing to consult the legislature or electorate’, Owen Jones explains, ‘because he is using the Queen’s powers’.

These are big chips to be gambling on the absurd principle of heredity. When Queen Elizabeth’s candle burns out Prince Charles will become the head of state. Owing to the discovery of the “black spider memos” we have learnt the breathtaking extent of his political involvement. In addition to his muscular writings, the Prince of Wales has had, at least, 36 meetings with cabinet ministers since 2010.

We are seemingly meant to value the Queen’s adamantine integrity and selflessness. In a series of  missives vouchsafed to us under the Freedom of Information Act her public image is riven with greed. Ventriloquising through her aides, the Sovereign Lady asked if money could be used from a £60 million energy-saving fund aimed at low income families and hospitals to meet soaring fuel bills. There came then a complaint that the government’s £15 million grant to maintain her palaces was inadequate.

And now to the actuarial: for 2013-14 the sheaves of money funded by British taxpayers totalled £35.7 million—a rise of £1.9 million, 5.7%, from the previous year. Its ardent supporters claim the monarchy is ‘worth every penny’—an argument given a strenuous workout by Catherine Bennett. Windsor partisans dote on tourism; indicting republicans for having something against the tourism industry. The oft cited £500 million figure, however, has little evidence to support it.

Another popular monarchist manoeuvre is to criticise our current political system. But such criticisms tend to miss the mark. The defects in Westminster are attributable to imitation. By that, I mean the government has become too monarchical. Second and third generation politicians populate political parties because of the faithful reproduction of the hereditary principle.

An elected head of state would not be costless — governments have a track record of squandering resources, but this is where legitimacy rears its head again: voters have means of holding politicians to account. The removal of this existing cultural chloroform therefore cannot come soon enough. Republicanism would redefine our citizenship; allowing us to grow out of our current subject status, and enhance our personal responsibility — support for the monarchy has been a long-lasting contradiction of personal responsibility-devoted conservatives. Republicans aren’t the only ones with explaining to do in this debate. Understand that an endless play on identity politics is not enough to justify the continuation of an obstacle to democratic maturity.

Note: This article was originally published on the LSE’s Democratic Audit blog and gives the views of the author, and not the position of the British Politics and Policy blog, nor of the London School of Economics. Please read our comments policy before posting. Featured image credit: michael koolman, CC BY ND 2.0

Richard Ridyard is a DPhil candidate in law at the University of Oxford, having previously studied there for a BCL. He is also a Humane Studies Fellow. 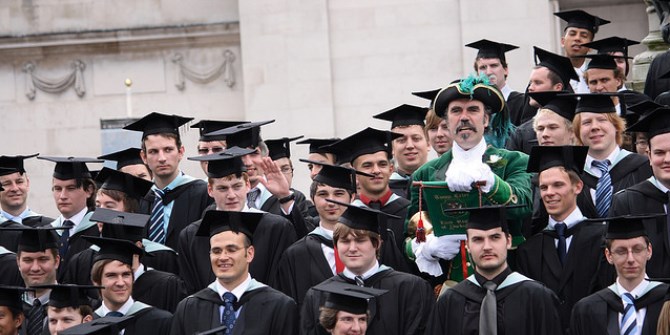