“Come on in. The water’s lovely” was Secretary of State, Michael Gove’s answer when asked by ardent Academy supporter, Richard Fuller about schools which “have not yet got up the nerve” to convert to Academy status at Education Questions in the Commons on 21st November 2011. Meanwhile, the Times Educational Supplement had, a week earlier, declared that “the widespread adoption of Academy status has done more than anything else to emasculate what was left of local (government) education departments”.

One of the government’s flagship policies, which was rammed through Parliament using procedures normally associated with emergency legislation in summer 2010, is to allow schools to become independent of local authorities in exchange for additional resources but more central control. While the government shows much commitment to promoting Academy status, little research has been undertaken on the extent of the changes and the effects conversion has on the local school and the complex web of relationships which ensures that there is a school place for every child and school improvement across an area are pursued. Although we cannot answer the question “Is anyone drowning yet?” the research available does give an idea of the national picture and points the way for further research. 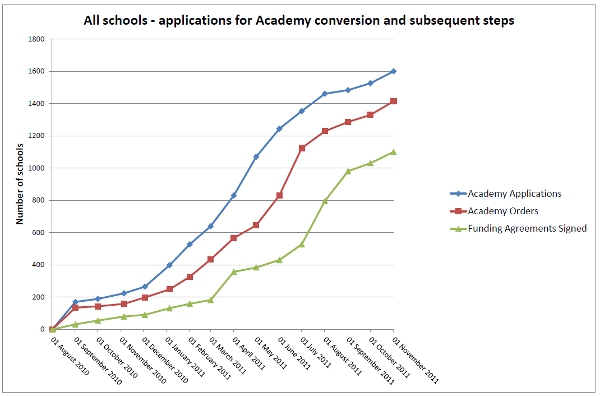 Figure 2 shows that the current rate of applications is about one-quarter of what it was in the spring: 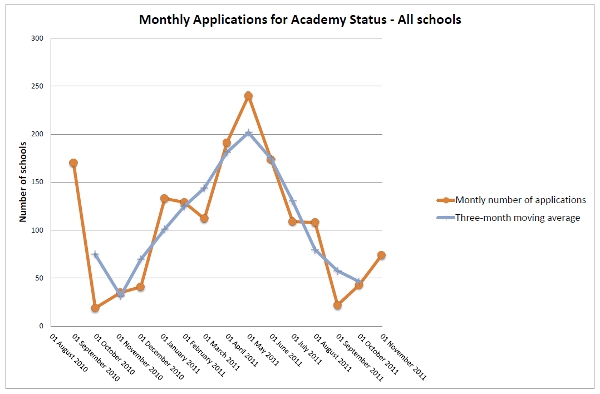 Looking more closely at applications by type of school, Figure 3 shows applications for academy status by primary schools. Roughly 20 schools are applying each month although there was an increase in October. The number of applications is again roughly at about one-quarter of the level of applications in the spring. 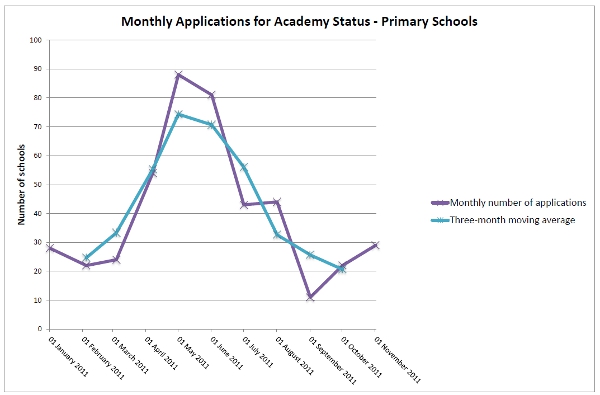 The January 2011 census reports that there were 16,884 “state funded” primary schools of which 37 were academies. The number of applications from primary schools stood at 508 on 1 November 2011 of which 321 had signed funding agreements. This leaves 16,339 maintained primary schools which had not indicated whether they wish to convert although it is almost certain there will be have been the normal opening and closing of approximately 50 primary schools at the end of the last school year. On current trends, it would take in the region of 65 to 70 years for all primary schools to convert to academy status. 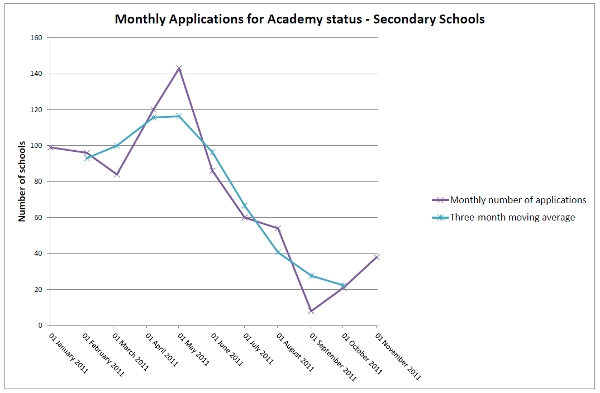 It spite of Mr Gove’s offer to join him in the water, the DfE has not published any targets for conversion of maintained schools although the planning assumptions behind the academies act stated that the department was planning for 200 conversions per year, a gross underestimate. The importance of this policy, controversial as it is, to the Coalition Government is not to be doubted. It was in one of their first Bill laid before Parliament and has dominated the media headlines ever since.

However, what is clear is that the initial enthusiasm for Academy conversions has waned considerably. With any new venture like this, there will always be schools and their head teachers who wish to be first on the block, especially with the additional resources on offer. The reality of what it means is probably now dawning on some schools with the consequent reduction in the enthusiasm. The late spring 2011 change to the rules about which schools can be “preapproved” for Academy status which increased the pool of potential converts has not increased the number wishing to convert. (Initially only schools with an outstanding Ofsted rating could be preapproved; now virtually any school can apply for Academy status although low performing schools will be required to partner with an outstanding school.)

What is clear though is that as far as secondary education is concerned, with 40% of the schools on their way to Academy status, it will change the landscape, and role of local government, for a long time. Little research has been done on the geographical distribution of the schools; it is likely that there is a high proportion in a few authorities and a further blog will look at this. Whether the local authorities are attempting to preserve some of the cross-area services and school support services either by selling to academies or establishing (or staff establishing) a social enterprise organisation to deliver services is not known.

It is also clear that primary education has hardly been touched by conversions to Academy status although it is possible that some areas have concentrations of primary Academies. There are many schools out there still resisting a swim with Mr Gove, and local government education departments are not yet emasculated (although some will have to become primary orientated).