It is unsurprising, writes Barry Loveday, that calls for the abolition of the elected Police and Crime Commissioners (PCCs) have emanated from a number of current and former chief constables. The Stevens Report argues for their abolition using a number of reasons, one which is particularly telling: because of the perceived attack on police operational independence (to which chief officers remain, of course, entirely wedded).

The recent Report of the Independent Commission on Policing for a Better Britain is a brave attempt to put a future Labour plan for policing back on the agenda. It is perhaps unfortunate (but also very revealing) that the Report attaches so much immediate importance to the abolition of Police and Crime Commissioners whose role it argues should be ‘discontinued in its present form at the end of the term of office of the 41 serving PCCs’. While the report extols the virtues of democratic engagement and accountability it would appear that sometimes you can have altogether rather too much of it. This would anyway appear to be the view emanating, not surprisingly, from a number of current and former chief constables who appear to have come to the conclusion that the PCC experiment has been ‘riddled with failings’ and as a model of governance has also demonstrated ‘fatal systemic flaws’. 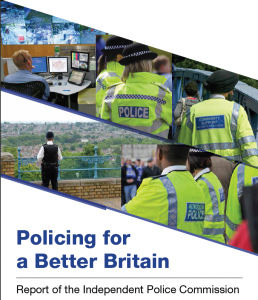 Just what constitutes these flaws is provided in some detail and range from low initial election turnout, background and composition of current PCCs, their staff appointments and lack of visibility. Many of these objections are in fact difficult to refute and owe much to the admitted failure of the Home Office to effectively manage the launch of this new experiment in direct democracy upon which it has placed so much hope. Yet it is also evident that there are much deeper objections to PCCs that go beyond those identified above. They pertain to the perceived attack on police operational independence to which chief officers remain, of course, entirely wedded.

This is evidenced most clearly in what can be taken to be the crux of the matter where, within the report, relationships between the PCC and chief constable are considered in some detail. Here we discover that the Commission has ‘deep concerns about the dismissal of chief officers’ along with the powers now exercised by PCCs to both appoint and dismiss these officers. It also highlights the use of this power by PCCs to ‘coerce different behaviours from the police service’. In this regard specific reference is made to the recent dismissal of the chief constable of Gwent which has it is argued ‘caused great disquiet among senior officers and parliamentarians’. Taken together the new powers of dismissal could it is suggested ‘risk exerting a damaging chilling effect over the leadership of the police service’.

While it might be unfair to describe all this as just another example of special pleading it is noticeable that the report does appear to reflect what might be described as a narrow police agenda. It is evident for example that outside of ACPO not everyone is so concerned about the professional longevity of chief officers and that bringing these officers to account has been a much needed reform. Described in a recent Guardian editorial as ‘absurd’ the recent history of PCCs has in fact served to demonstrate their worth in this regard. The brave decision on the part of the (female) PCC for Avon and Somerset to in effect get rid of the chief officer was a seismic development which immediately differentiated this office from predecessor police authorities while also sending a big message to those holding ACPO rank. In Gwent, the PCC (a former police superintendent) decision to remove the chief officer followed on from her refusal to allow her officers any contact with the PCC. It also reflected his concern that too much importance was being attached to performance targets and not enough to local crime concerns. If these are judged to be ‘failings’ then we might in fact look forward to many more of them and where (as in at least one south Midlands force) police officers and staff are refused access to the PCC by the chief constable a similar outcome could rightfully be expected.

Nor are other arguments made against PCCs altogether persuasive. While concern is expressed that PCCs will ‘pander to popular policies’ or give ‘voice to the demands of their constituents’ it might be thought that this was in fact one precise reason for their creation. For far too long policing priorities have been the ultimate preserve of the police and this certainly needed attention. On example of this would be changing attitudes to anti–social behaviour which currently swamps most local (neighbourhood) policing teams and which was to be only officially recognised as a serious threat to the well being of many communities as recently as 2010 within the HMIC report of that year. If therefore PCCs are able to direct police attention, as a priority, to what most concerns local residents then this would, in fact, be a major achievement.

The concern about potentially populist tendencies among PCCs is in fact based on a view that police chiefs and forces need to direct their attention much more to strategic policing objectives in responding to crime that spans force and national boundaries. This concern extends to serious and organised crime and appears to overlook the likely impact of the National Crime Agency which has been established to respond to precisely these matters.

Within the report little evaluation is made of the potential impact of the NCA. This is also of interest not least because some of ‘Consultees’ to the Commission make up part of the cabal of former Metropolitan Police Commissioners who now sit as members of the House of Lords. They recently sought to derail the launch of the NCA by successfully persuading the Government not to give it national responsibility for Counter-Terrorism but to ensure it remained a responsibility of the MPS, their old bailiwick.

While all of this may not be a matter of surprise the concern about future police capacity forms an important subtext for the strongly argued proposition of the need to amalgamate police forces on a regional basis. This old chestnut serves perhaps more than anything else to demonstrate the nature and extent to which the Report in effect only pursues an established police agenda. Reducing police forces appears to be the template of ACPO strategy and it is of no surprise that the Report draws on the 2005 HMIC report ‘Closing the Gap’ which argued for regional police forces of not less than 4000 police officers per force.

Statistical evidence presented within this report to justify the claims made for bigger regional forces were of course to be blown apart by an independent study undertaken by an academic statistician at Warwick University. He concluded that within the HMIC Report, there had been ‘minimal input of professional statistical science in relation to data analysis, its presentation and the conclusions drawn’ (Lawrance ‘15 minutes of statistical fame’, Significance 2006). While his conclusion might entirely justify the new commitment to evidence based policing by way of the College of Policing, it also raises a big question mark over the value of the Commission’s Report which gives so much attention to HMIC’s ‘Closing the Gap’ in justifying future force amalgamations.

It is clear that the Commission’s report will contribute to the debate on policing and there are issues raised that cannot be addressed here. But while the Chair of the Commission was to comment that he had the help of no less than 47 scholars from 28 different universities to help him produce the report it is evident that advice from former police commissioners have proved to be very influential. Indeed of the 40 people consulted in the production of the Report over half were from senior police backgrounds. This must I fear necessarily colour how the report is received and interpreted.

Barry Loveday is Reader in Criminal Justice at the University of Portsmouth.

Eurozone woes shake the UK, foreign students no longer welcome, and unions get set for strike action: round up of political blogs for 29 October- 4 November