Using survey data from the UK, Stephanie Rickard finds that public support for bailouts varies by country and is dependant on factors such as beneficiary ties with the UK and the amount of issue-specific knowledge an individual has, with a greater percentage of support for the bailouts found within academia.

Since 2010, the British government has committed substantial financial resources to rescues for several European countries. Through its membership in the International Monetary Fund (IMF), British funds are involved in all IMF loan programs, including those to Ireland, Portugal and Greece. The same is true of Britain’s membership in the European Union (EU). The European Commission, using the EU budget as collateral, borrows money from capital markets which it then lends to EU countries in financial distress via the European Financial Stabilisation Mechanism (EFSM). The British share of this pot is between 12 to 14 per cent or approximately eight billion euros (Guardian, 22 November 2010). As an EU member and contributor to the EU budget, the UK has no choice but to take part in this lending (although the British government chose not to take part in the bailout funds specifically designed for the 17 Eurozone countries).

In addition to participating in multilateral financial rescues, Britain also undertook a bilateral rescue package for Ireland. In November 2010, the Chancellor announced that Britain would provide around seven billion pounds to support Ireland (Reuters, 22 November 2010). In December 2010, Members of the British Parliament voted to approve a 3.25 billion pound bilateral loan to Ireland. The 3.25 billion pound loan was designed to be paid out in eight equal instalments starting September 2011. On April 17, 2012 Britain delivered the third instalment of its bilateral bailout loan to Ireland.

Public opinion about the Irish loan was split. Nearly half (48 per cent) of Britons opposed the Government’s decision to lend money to Ireland (YouGov, November 2010). However, the other half supported the Government’s decision. Why do some citizens support international financial rescues while others oppose them? Evidence from two surveys conducted in the United Kingdom sheds new light on this question.

The first survey elicited responses from academics studying and/or teaching international politics in the United Kingdom. The survey of academics was conducted as part of a larger survey project on teaching, research and international policy (TRIPS) in 20 countries. By design, the survey of academics included three questions about international financial rescues identical to questions asked in a survey conducted by YouGov. The YouGov survey elicited responses from a demographically-representative sample of the general British public. Several important determinants of citizens’ attitudes towards bailouts emerge from these two surveys.

First, public opinion towards rescue programs depends crucially on the identity of the beneficiary country. Citizens are more supportive of rescues for countries with which their own country has strong economic ties. Britons, for example, are more supportive of financial assistance for Ireland than for other European countries, such as Spain. While 79 per cent of academics said that Britain should lend money to Ireland, only 63 per cent of academics said that Britain should lend to “other countries in the Eurozone, such as Spain”. Public support for international financial recues fell by more than seventy per cent when British respondents were asked about countries other than Ireland. While thirty-six per cent of YouGov respondents said Britain should bailout Ireland, only 10 per cent said Britain should bailout other Eurozone countries, like Spain, as reported in Figure 1 below. 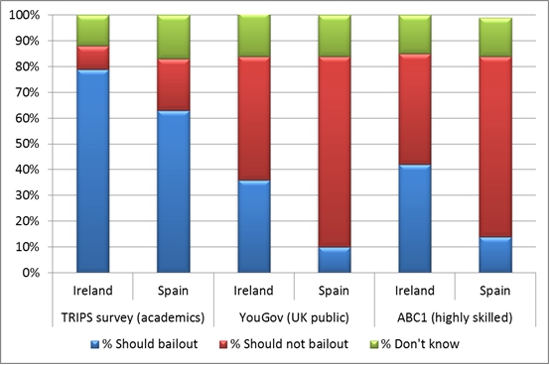 Additionally, individuals with greater issue-specific knowledge are more supportive of rescues, on average. Scholars of international politics were more than twice as supportive of the British government’s loan to Ireland as the general public. In fact, seventy-nine per cent of academics said that the Government should lend to Ireland. In contrast, only 36 per cent of the general public said that the government should lend to Ireland. Similarly, academics are more than six times as supportive of rescues for other Eurozone countries, such as Spain, than the general public. While sixty-three per cent of academics said that Britain should contribute to bailouts for other countries in the Eurozone, only ten per cent of YouGov respondents supported such bailouts. One reason for the large difference in opinion about bailouts may be academics’ knowledge about international politics, the Eurozone, and international rescue programs.

Stephanie J. Rickard is an Associate Professor at the London School of Economics in the Department of Government. She earned her PhD at the University of California, San Diego and her BA at the University of Rochester. Her research examines the effects of political institutions on economic policies and appears in journals such as International Organization, The Journal of Politics,British Journal of Political Science, and Comparative Political Studies. Her current research includes a study of “buy national” procurement policies and an investigation into how national elections impact on IMF loan negotiations. She is a member of the International Political Economy Society’s steering committee and was recently elected to the Governing Council of the International Studies Association. She has appeared on BBC Radio 4’s flagship Today programme to discuss various events in the global economy, including the leadership contests at the WTO and IMF.