Each new round of the OECD’s global education survey leads to scrutiny of country rankings based on the average child’s performance, but the new Innocenti Report Card argues that equality in test scores is just as important as average standards. Yekaterina Chzhen and Gwyther Rees, lead authors of the report, illustrate this point in relation to the four nations of the UK.

The UK comes 16th on equality in children’s education in UNICEF’s latest Innocenti Report Card, barely in the top half of the 38-country league table. If the four nations of the UK were included as separate entities, Wales and Northern Ireland would top the ranking, Scotland would rank 9th and England would move down to 20th place.

‘Naming and shaming’ comparisons based on standardised international school tests have become an important influence on public debates and on educational policy-making. Issues of equality and inequality are rarely mentioned. But, analysis of equality creates a very different picture of which countries are doing ‘well’ or ‘badly’. It also raises important questions about how policymakers can best use international comparisons to improve education systems for all children.

In other fields of social policy it is accepted that not only averages but also equality is important. For example, policies that aimed for longer life expectancy for the healthiest people while leaving the least healthy behind would not be viewed as optimal or ethical. In terms of education, large inequalities mean that many children are not getting a fair opportunity to fulfil their potential.

In our new report for UNICEF we argue that international comparisons of education should focus on both averages and equality. Here we illustrate these points with reference to the four nations of the UK. The UK is an interesting environment because devolution of responsibility for education to the four nations has created a case study on the impact of policy divergence. For example, the major shift in England in management of schools – from local authorities to independent bodies – is still going on and its long-term effects are unclear. A recent study suggested that recent policy changes may be creating greater educational inequality.

Figure 1 shows that England has the highest mean PISA reading score of the four UK nations and Wales has the lowest. England, Northern Ireland and Scotland are above the international average for EU/OECD countries, while Wales is below. These figures sparked the headlines such as: “PISA: Wales still worst in UK in world education tests”. However, the score of the average child is only one way of evaluating school systems. It is also important to consider the equality of each system. Figure 2 shows the gap in reading scores between children at the 10th and 90th percentiles of the distribution. Here the tables are turned, Wales fares best (most equal), followed closely by Northern Ireland. Scotland ranks third and England is the least equal in the UK. England’s performance on this measure is around the EU/OECD average. But Wales and Northern Ireland are more equal than any EU/OECD country in the analysis. If they were treated as separate entities they would be at the top of this particularly PISA league table, and this would create a different set of headlines.

Figure 2: reading scores between children at the 10th and 90th percentiles in the UK Wales is also substantially the most equal of the four UK nations (and second most equal in the international rankings) in terms of the socio-economic gap in reading scores between children of parents with ‘high’ and ‘low’ status jobs. England is the least equal of the four nations on this measure. On the basis of the differences in mean scores it has been argued, for example, that Wales’ relatively poor average performance is due to fewer very high-achieving students than other UK nations, particularly England; and improving performance at the top end is an emerging policy priority in Wales. But what are the implications of this kind of thinking? And why should we only make internal comparisons within the UK in this way?

Figure 3 shows that there is not necessarily a trade-off between performance and equality across the 37 OECD/EU countries included in PISA, plus the four nations of the UK separately. In fact, countries with higher performance tend also to have lower inequality. 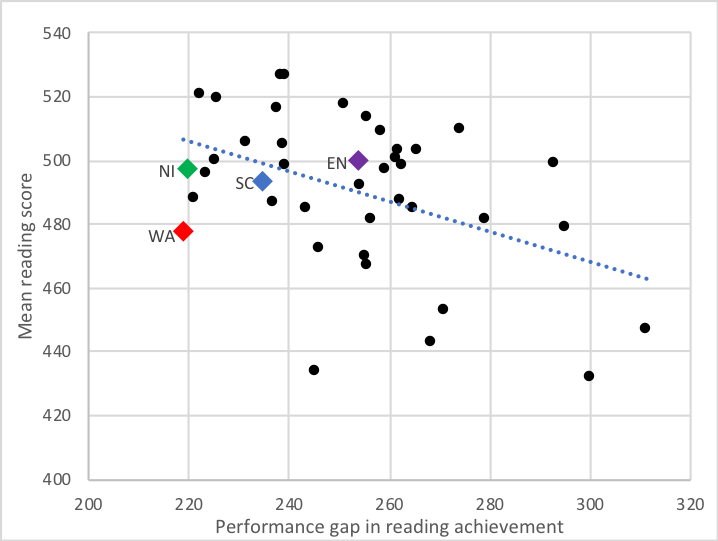 Given this pattern, we consider the ideal position as being towards the top and left of the chart – balancing high performance with high equality. The two countries circled – Ireland and Estonia – are in the top five countries (excluding the UK nations) in both respects.

We can envisage what each of the UK nation’s priorities might be if it wished to pursue an approach that emphasised both performance and equality. Northern Ireland has the least distance to travel and might pursue an across-the-board improvement in standards – striving not to increase inequality. Wales might pursue a similar objective although it has further to travel in terms of standards. England and Scotland have a slightly different task – needing to make some improvement in standards while also reducing inequality. This might be achieved by focusing efforts on the lower end of the distribution.

In none of the four nations would an emphasis on already high-achieving students help very much in reaching the top left-hand corner. In England this policy could lead to both the mean and inequality increasing. England, Scotland and Wales might all aspire to emulate Northern Ireland. But none of these three nations would reach a better balance of student performance and equality by emulating one another.

We recommend an approach that carefully weighs up both the average performance and the level of equality to improve the way in which policy makers use PISA and other international tests. It avoids the risk that the competitive push to increase standards will benefit some children, mostly from better-off families, while many more are left behind their peers.

Note: this article draws on the Innocenti Report Card 15 as well as extra analysis by the authors of this article. The opinions expressed here are those of the authors and do not necessarily reflect the policies or views of UNICEF, nor of any particular Division or Office.

Yekaterina Chzhen is a Social and Economic Policy Specialist at the UNICEF Office of Research – Innocenti.

Gwyther Rees is a Social and Economic Policy Consultant at the UNICEF Office of Research – Innocenti.

The political left and its discomfort with diversity: David Goodhart represents a longstanding current within Labour