Ha-Joon Chang’s international bestseller 23 Things They Don’t Tell You About Capitalism provides some truly fascinating insights into the pitfalls of free-market capitalism, finds Joan Wilson. Explaining in accessible language how many of our other present-day economic problems are related directly to free-market policies, the book is broad in its appeal and essential reading for anyone who wants to know more about why the weaknesses of capitalism need to be addressed. 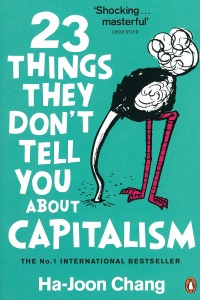 Free market capitalism came to dominate and define world economic systems and the relative prosperity of countries in the international arena from the 1980s. Policy makers were drawn to the view of neo-liberal economists that the most efficient and just way to organise the collective preferences of rational, self-interested individuals was through a market mechanism free from regulation. In his extremely inquiring and thought-provoking book, Ha-Joon Chang argues that it is this particular form of capitalism that is responsible for many of the economic ills pervading our globalised society.

Set out as 23 chapters, 3 of which are discussed here, readers are able to pick and choose according to their interests, but will benefit most from the reading the text as a whole.

Is profit maximisation a good goal for firms?

At the micro-level of the firm, the author questions a key area of corporate sector financial operation that has remained unchallenged prior to the recent debate and public frustration over inflated salaries of company executives – that of shareholder value maximisation. Under free markets, companies should aim to maximise profits for their owners – their shareholders – as the wealth that this creates forms the pathway for the social contribution of business.

The problem with this strategy is that shareholders possess sufficient ease of entry into and exit out of an organisation that they face little incentive to care about the long-term health of a company. Thus if high profits are attained through minimising labour costs – for example by sacking workers and employing non-unionised labour – or by failing to reinvest retained profits back into the company and instead engaging in more share buybacks to maximise the company’s value, shareholders are unlikely to question these methods. As most shareholders bear short-term stakes, they are equally unconcerned about how much a manager may reward him or herself for strong company performance, so long as profits are maximised, while a manager often benefits from company profits through the additional perk of ownership of stock options. So free markets may generate some wealth creation through optimal shareholder value, but both companies and the jobs of their employees can be destroyed in the process of pursuing ever-higher shareholder payouts.

Can governments spot ‘winning’ business areas better than the market?

At the national level, Chang demonstrates that, had the neo-liberal principle of minimal government interference in a free-market system been followed to the letter, the production areas in which some countries now specialise and the subsequent economic prosperity from which they have benefitted might never have existed. He cites examples from Korea, where the LG Group electronics company was prevented from entering the textile industry as it had preferred, and was instead steered towards the electric cable market by the government, a direction that enabled it to attain its current status. Even in a free-market-oriented country like the US, it is argued that the government’s support for Research and Development intensive industries has led to enviable expertise in IT, semi-conductors, and aircraft. This indicates the significance of strong state industrial policy and goes against the notion that it is only better-informed market participants that can pick successful business areas.

Standing on their own two feet: economic development in Africa

Internationally, perhaps the most profound criticism of globalisation policies comes through the failed economic growth of developing countries following their imposed adoption of a free-market mechanism three decades ago. Nowhere is this more prevalent than in Africa, and particularly in the Sub-Saharan countries who, through conditions specified in the Structural Adjustment Programs (SAPs) of the World Bank and the IMF, implemented free-trade and free-market schemes. Subsequent exposure to global competition ensured that they lost any ground they had managed to gain in economic development through the industrial sector. By contrast, it is argued that the strength of many Western economies was formed from their infant-industry protection and government subsidies that served to support the process of industrialisation standing on its own two feet, only after which were domestic markets opened up to international competition. Again, this illustrates the important role that leadership by government plays in national development.

Let’s work together: the state and the market

One point of criticism is that it is in his commenting on the actual existence or otherwise of a free-market that the author creates doubt over the strength of his assertions that this system can be held responsible for today’s global problems. In reality, as Chang notes, a free-market does not exist because government regulations are present throughout society, such that the conditions and boundaries of a ‘free-market’ are not clear. As such, it is impossible to hold this form of capitalism accountable for current economic concerns with certainty – economics is an imperfect social science. The issue then becomes one of a trade-off: given that a (non-free) market Chang’s book provides some truly fascinating insights into the pitfalls of free-market capitalism, just three areas of which have been discussed here. mechanism and state intervention co-exist, the performance of capitalism itself could be enhanced as much through greater competition (a stronger market) as through more regulation (a stronger state).

It’s not hard to see why Chang’s book is an international bestseller: each of one his 23 propositions provides a truly fascinating insight into the pitfalls of free-market capitalism. The book draws on many of our other present-day economic problems – such as inequality, extremes of poverty and wealth and the financial crisis in the Western world – and how these relate directly to the policies and mixed incentives of free-market economics. The ease with which the text flows, the succinctness of each chapter, and the fact that the author makes no assumptions about the reader’s depth of knowledge on this system of capitalism broadens the appeal of the book beyond those involved in academic study of economics. At the same time, the book would benefit from greater clarity on the exact original principles of a free-market system and the foundations of their formation in economic thinking, given the emphasis the author places throughout on economic problems stemming from free-market policies.

Ha-Joon Chang has given a public lecture at the LSE based on his book 23 Things They Don’t Tell You About Capitalism. For more details including a podcast and slides from his lecture, see the LSE Events page.