Barbara Richter gets to grips with the serious possibility of a new economic model, finding many ideas that deserve to be read and discussed. 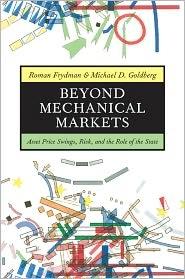 More than two years after the economic crisis first loomed its head, the future of economic policy in the UK and across the world is still heavily debated. With the IMF now searching for a new Managing Director (the money seems not to on Gordon Brown however), important discussions around the relationship between government and the markets will surely continue.

So why did standard models in financial economics not see the crisis coming? What can be done to keep a repeat of this crisis from happening? These are the questions at the heart of Roman Frydman (New York University) and Michael D. Goldberg’s (University of New Hampshire) book Beyond Mechanical Markets – Asset Price swings, Risk and the Role of the State. The authors not only show the insufficiency of current theory, they also present an alternative, “Imperfect Knowledge Economics”, that aims to address these issues and give very different policy recommendations from the ones considered en vogue now.

The first part of the book is devoted to taking apart the rational expectations hypothesis, today’s dominant assumption in all financial economics. The hypothesis states that all actors in a market use all information and the correct economic model to form expectations of the future of the economy in all eternity. This is of course, as the authors show in great detail, nonsense. The rational expectations hypothesis ignores the fact that no individual person can have all available information, and much less that everybody can know everything they need to know. It also ignores that innovation of any kind may alter the way the future economy works, possibly changing the way forecasts should be made.

The authors’ own “Imperfect Knowledge Economics” addresses these issues, as detailed in the second part of the book. Frydman and Goldberg provide a theory of forecasting behaviour, the result of decades of research, that takes into account that some things are unknowable in the present and that market participants may actually change their forecasting strategy from time to time. Some space is given to empirical studies that support their theory and a long chapter talks about its policy recommendations: the state should limit asset price swings. Current measures in the US and in Europe to prevent a repeat of the financial crisis are viewed favourable, but in the authors’ point of view don’t go far enough.

This book is a bit of a curiosity: its central idea is eminently sensible, to the point where most non-economists will say “well, yeah, but isn’t that obvious?” (And it really shouldn’t be too surprising to economists either). It is thorough in its deconstruction of the rational expectations hypothesis and even more thorough in its description of the new theory. At the same time, it is a tedious read. Most of what the authors have to say in the first part could be said crisper, thus not wearing out the reader’s patience before the actually really interesting second part begins. The book is non-technical, both the rational expectations hypothesis and the “Imperfect Knowledge Economics” are explained without resorting to mathematics. I am not sure, however, that many non-economists will find the terminology accessible.

The policy recommendations derived from “Imperfect Knowledge Economics” follow logically and consistently from what the authors describe in the preceding chapters. To work in practice, the recommendations require public servants and politicians that are immune to lobbying and public opinion and complete honesty on the part of all market participants. All in all, the ideas in this book deserve to be read and discussed. I just can’t promise a wholly enjoyable read.