Asiya Islam reviews Blogistan, a book shedding new light on the special significance of blogging in Iran. A must-read for those interested in the Middle East, media studies or free speech, the book should be seen as the tip of an iceberg. The politics of blogging in Iran is a wide topic that is integral to exploring issues of free speech, democracy and governance in the current scenario. 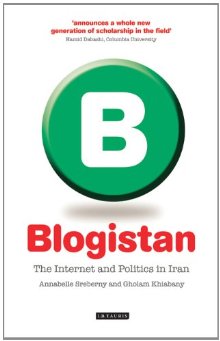 Iran and blogging. Most of us, when encountering the relationship between the two, would probably think about conservatism and the extent of repression in the Islamic Republic of Iran. Arrests of some prominent Iranian bloggers, such as Hussein Derakshan, popularised through the Western media would also spring to mind. But not many of us would know that Persian is one of the most used languages in the blogosphere or that there are almost 700,000 active Iranian bloggers. This is precisely why the book Blogistan: The Internet and Politics in Iran is a must read for those interested in media studies, the Middle East or politics in general.

The book by Anabelle Srebarny (School of Oriental and African Studies) and Gholam Khiabany (London Metropolian University) offers a very interesting insight into the working of the Republic, its contradictions and its modern narrative underwritten by the emergence of the internet and blogging.

An overview of how the possibility and the prevalence of the internet and blogs has changed (or not changed) the socio-political scene in Iran couldn’t be more timely. The year 2009 witnessed what was called the ‘Twitter revolution’ in Iran. The heavy reliance on and use of Twitter for spreading word about the protests following the controversial election results earned it this nickname. Its similarity with the use of Blackberry messaging in the recent UK riots is quite striking.

As Srebarny and Khiabany assert, the socio-political importance of blogging in Iran cannot be understood without referring to the history of revolutions and attempts at democratisation in the country. At the same time, blogging or blogs should not be seen as synonymous to ‘resistance’ for it is a flawed perspective. In Iran, religious clergy and even state officials have taken on blogging as a way of propagating religious and pro-state sentiments. Such a phenomenon is indicative of the contradictory threads of tradition and modernity in Iranian (and for that matter, many other developing countries) society.

What then is the special significance of blogging in Iran, one may ask. As Srebarny and Khiabany put it, “…while a poet might be just a poet in England, a poet in Persian is most probably writing between the lines, evading the censor and pushing the boundaries of publicly acceptable expression”. In Iran, largely governed by religious principles and laws, heavy surveillance prevails because any deviation from the norm is seen as a threat to the regime. Internet, in particular, has been the object of this surveillance because it is open to influences from outside Iran in a way that no other media channel has been before. The danger of ‘Westernisation’ often springs up as a rationalisation of devising strict regulations around the internet by the State (such as censoring key words like ‘women’ and ‘sex’ in search engines).

Blogging in Iran has been, to a certain extent, liberating in that it has developed a new public space for debate which had otherwise been curtailed through the closure of many critical newspapers and journals. Public space for debate has been created by blogs in the UK as well with newspapers like the Guardian using this medium for increasing or supplementing dialogue (see Comment is Free). But in Iran the blogosphere is more important in that it has emerged as a substitute for activities and media clamped down by the government.

For example, Iranian women, who are excluded from almost all public spaces have turned to blogs to express their opinions. It is a surprise (or perhaps not a surprise at all for most revolutions spring from repression) that in a country where there is almost no political representation of women, there is hardly a gender divide in the digital world with women bloggers traversing the boundaries of the public and the private by discussing hejab, familial and sexual relations and many other controversial topics on their blogs.

Though the book provides a massive overview of blogging and related issues in Iran, there are questions that remain unanswered, mostly because of the lack of research in this area. There is, firstly, a lack of clarity as to who ‘Iranian bloggers’ are. Heavy emigration has characterised Iran at various points of times due to various reasons. There is, therefore, a diasporic element to be considered when talking about Iranian blogs and bloggers.

The question of whether blogs have managed to create a vibrant and strong public sphere is also a difficult one. Socio-economic realities still very much shape the Iranian digital world and to assume that to be a blogger is to be free to contest and debate is wrong and simplistic.

The book should really be seen as the tip of an iceberg – the politics of blogging in Iran is a wide topic that is integral to exploring issues of free speech, democracy and governance in the current scenario. Blogistan: The Internet and Politics in Iran is an important read, for it initiates a discussion that could and should lead to further research in this very interesting area.