As Owen Jones’ book Chavs is longlisted for the Guardian First Book Award, we re-visit Carl Packman‘s review of this persuasively argued and passionately written book on how New Labour policies were sometimes steeped in Tory middle class triumphalism. 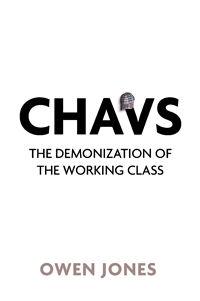 Few first time authors have been able to spark as much debate about a subject as Owen Jones has with his new book Chavs: The Demonization of the Working Class. A glance at the search results for chavs on Google, only a few days after the book’s release, shows how much Jones has dominated the conversation on the controversial word, and its wider political connotations.

Not only has he managed to grab the attention of the mainstream press and blogosphere, but he has done it in a broadly supportive way. While Polly Toynbee has given a glowing recommendation of the text, The Independent made it their Book of the Week. But whether his bold conclusions will gain any traction with politicians and policymakers is another matter entirely.

Jones has written, not a myth-busting book setting the world right about what is or is not a ‘chav’, but a reminder of the institutional demonization of the working class in general. His point, however, is not that working class people can be reduced to the status of a chav – rather, the mythical ideology of aspiration, from Thatcher through to Blair, has all but rid the working class of its pride.

Indeed as Jones rightly puts it: “Thatcher’s assumption of power in 1979 marked the beginning of an all-out assault on the pillars of working class Britain”. On her watch council estates were something to be feared, not somewhere to be proud of, and her callous derision of single-mother families ensured communities were divided. All the while trade unions were being targeted and dis-empowered, while the poor found themselves getting worse off.

Today, after the thirteen years of a New Labour government things have not changed much. Jones points out that many New Labour policies were steeped in the kind of middle class triumphalism usually associated with the Tories. Stories about the lazy unemployed became a commonplace, while Labour politicians like James Purnell spent more time appeasing Tory attitudes and less time addressing the deep rooted problems that Britain inherited from Thatcherite destruction.

Jones’ message in the book is held together by a wealth of research and interview material, tirelessly collated, and chronicled in a way that demonstrates how politicians were saying one thing, while the reality painted a different picture. While Britons were encouraged to make more of themselves and enter into a middle class ‘norm’, opportunities were becoming fewer, poverty was rising, and stories of mass social mobility were grossly exaggerated.

As Jones clearly notes in the book, ‘chav’ (and ‘chav-bashing’) is the perfect embodiment of how far the class war, waged by the political establishment, and perpetuated by many in the mainstream media, has come. No longer is class prejudice simply fought along the lines of ‘them (the poor) and us (the wealthy)’, but a situation has arisen where their demonization of the working class has created a ‘them and us’ within those very communities.

However, more could have been made to unpack what relation ‘chav’ has to the working class in general. While it is safe to assume ‘chav’ is that voiceless group in society which it is still acceptable for middle class people in the press to denigrate, the looseness of Jones’ definition opens him up to criticism that he is making a crass generalisation.

All in all, Jones’ book is persuasively argued and passionately written; it will be hard to ignore, not least because of the interest it has already generated. At a time when a cabinet of millionaires has set about cutting public service budgets, while making massive rearrangements to the welfare state, it was only going to be so long before class was back on the agenda. I would be very surprised if this book doesn’t spur on that conversation.

Carl Packman is a researcher in health and children’s policy. He also blogs at http://thoughcowardsflinch.com