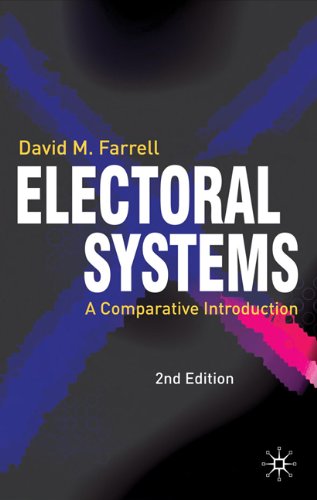 In the midst of the debate on electoral reform in the UK, David Farrell’s book provides a helpful framework for understanding why some political actors are for status quo while others lean towards change. Electoral Systems: A Comparative Introduction will help those who are undecided or neutral to the reform of the electoral system to take sides, as well as encouraging those who have already taken sides to reconsider or fortify their argument. In this second edition (first published in 2001), Farrell puts together a remarkably concise yet comprehensive map of the structure and the dynamics of electoral rules. Although the book gravitates around Britain and the west European countries, the narrative grounded in characteristics common to all electoral systems allows the reader to extrapolate inferences to other democracies.

In the first part of the book Farrell offers a descriptive account to identify and assess the output of electoral systems, and the nature of their relation to the mechanic elements. For example, in the second chapter the author promptly enlightens the reader on the logic of the non-proportional single-member plurality system (SMP) and discusses how it interacts with the size of the constituency, the formula that converts votes into seats and the ballot structure. He follows this format to address different type of proportional representation systems (PR) and mixed member systems (MMS) as well.

The second part of the book takes an analytical approach to electoral systems. Farrell reviews literature on the systemic and strategic components of electoral systems. By assessing the association between electoral disproportionality and voter representation he evaluates the conflicting view on whether proportional representation systems contribute to the strengthening or the weakening of representative institutions. This is not a minor point. A mainstream topic among electoral students has been to determine which system (usually between PR and SMP) is more compatible with the theory of democratic representation.

In Farrell’s view, PR and SMP are mutually exclusive on theoretical grounds. Those who prefer PR systems interpret representation as a ‘microcosm’, where the Parliament must represent the exact proportion of voters in the country (e.g., if there are 40% women, then 40% of MPs should be women). In change, those who prefer SMP systems interpret representation according to the ‘principal agent theory’, where it does not matter if all MPs are white and in their 50s, as long as they truthfully represent the specific interests’ and issues’ of their constituencies.

Of course, there are always MMSs to fall back on (a MMS is the combination of the PR and SMP systems, in some way). However, Farrell cautions the reader (citing prominent political scientist Giovanni Sartori) that while MMSs have often been attributed the label of uniting the ‘best of each system’, they may very well turn out to be a ‘bastard-producing hybrid’ which combine the worst of the PR and SMP systems.

This discussion opens space for a section exclusively dedicated to looking at the politics of electoral system design. Farrell compellingly shows that in the light of the evidence collected by political scientists, and other electoral experts, specific inferences can be drawn on how electoral arrangements determine political behaviour. It is along these lines that Farrell warns that countries facing the option of switching electoral systems must take into account the political, social and cultural background of the country.

Overall, Electoral Systems is ideal for advanced undergraduate and graduate students, but the timing of the publication with the debate on electoral reform means it will surely be read by many others interested in learning more about the inner workings of electoral systems.

Kenneth Bunker is a Political Science PhD student at the LSE Department of Government.

Book Review: History of Political Theory: An Introduction Volume I: Ancient and Medieval