Fatima Sadiqi’s edited volume on the relationship between gender and violence in the Middle East breaks down stereotypes and presents innovative ways to judge the issues at hand, as reviewed by Asiya Islam. 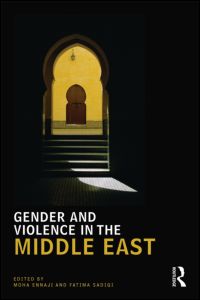 Gender and Violence in the Middle East. Moha Ennaji, Fatima Sadiqi. Taylor and Francis. May 2011.

Gender and Violence in the Middle East is an edited collection of essays that explores the relationship between power, gender, Islamism and secularism in the Middle East from various perspectives. Indeed, the study of gender and violence in the large and plural region of the Middle East (the term ‘Middle East’ itself an ambiguous term used in many different ways) is bound to be very varied and vast. Edited by Moha Ennaji and Fatima Sadiqi, both experts in linguistics and gender studies, the book offers new insights into the topic, but more importantly it proposes various innovative methodological and analytical frameworks to study gender and violence in colonial and post-colonial regions and territories in conflict.

The book begins with a cautious word on conceptualising and understanding gender, which is essential reading to those new to the topic. The chapters then follow thematically, covering the conceptualisation of gendered violence in relation to armed conflict, religious and social violence, legal reform, and language and media. Such caution and theoretical conceptualisation is necessary in light of the fact that media and public attention mostly go out to events such as the beating of a young woman by Egyptian soldiers, and the abuse suffered by a child bride in Afghanistan.

An essay entitled ‘Feminist Anthropological Perspectives on Violence’ will be of interest to students of sociology, anthropology and gender studies. In the essay, Patricia Zuckerhut raises the very important question of whether the concept of violence can be universal. Ideas of violence and the judgement of whether an action constitutes violence are not only determined by geography but by many other factors, such as the relationship between the victim and the perpetrator, moral and ethical codes, behaviour pattern of the victim, or site of violence. This is vital to understanding the dynamics of gendered violence and discrimination.

Gendered violence is not a rare occurrence in armed conflict, and the conflicts in Palestine and Lebanon are no exception. In her essay on gender-based violence in Palestine, Shalhoub-Kevorkian uses the voice of Palestinian women to explore the “politics of fear” that has allowed the ahistoricization of the Palestinian “other”. The essay also discusses the “emasculatory” violence or threat of such violence that victimises men in such conflicts. Along the same lines, Shehadeh’s essay on the impact of armed conflict on gender roles in Lebanon provides an interesting perspective, breaking away from the myth that women are always peace-loving and nurturing while men are enticed by war. The essay offers various examples of how women in Lebanon have actively contributed to upholding the war machinery and how the war in Lebanon has helped to subvert women’s conventional societal roles. Both chapters truly benefit from the qualitative methods used in the research, giving readers the direct voices and opinions of women.

The last section of the book on ‘Language, Sexual Harassment and the Media’ will be especially interesting for students of the media and popular culture, and is also significant because it paves the way for understanding violence beyond physical acts. As Sadiqi propounds in her essay ‘Women and the Violence of Stereotypes in Morocco’, gendered violence often takes the shape of denying women and men voice, and instead typecasts them in dominant gender roles, ignoring the plurality of identities. On the other hand, media can also be used to counteract such and other types of violence. In a case study of Palestinian women making films, Yaqub says Palestinian women, through the use of technology available to them, have been able to respond to and chronicle violence against them.

In sum, Gender and Violence in the Middle East offers the reader a thorough insight into the array of issues surrounding gender and violence in the Middle East and North Africa. The range of perspectives presented is wide and therefore useful in comprehending the plurality of the region, its problems, and its issues. It is also a good source for researchers interested in employing various research methods to study the causes, manifestations and effects of gender based violence.

Book Review: Why Are Women More Religious Than Men?