This book is about women’s careers, how women think about and enact their working lives, and how these patterns change, or stay the same, over time. This is an authoritative and thought-provoking book, which makes maximum use of the methodology of semi-structured in-depth interviews to reconsider many assumptions about the apparently straightforward notion of the career, writes Ruth Garland. Laurie Cohen is an experienced academic specialising in occupational behaviour. She focuses on the close observation and analysis of the lived experiences of women in a range of career settings, looking at work-life balance, midwifery, science and engineering, portfolio working and entrepreneurialism.

In Imagining Women’s Careers, she uses a unique data set – in-depth interviews carried out in 1993, and again in 2010, with 17 women from a formerly industrial northern English city who moved from employment to self-employment during the early 1990s. She uses the rich narratives developed by the women over time to examine the notion of career in its deepest sense; as a form of identity, as a financial imperative, and as a life course, to introduce her concept of the “career imagination”. She sees this as a process of construction in which careers are “cast and re-cast in the flow of time and across space…a bounded concept, defining the limits of what a person sees as possible”(p165, 168).

The idea of the career imagination springs from the textured and sometimes perplexing and contradictory nature of the narratives which emerge from the interviews. She “cuts” the data in various different ways, producing a different “cut” for each chapter, and weaving in a wide range of theoretical sources, and concluding that many are inadequate in capturing the reality of her respondents’ lives. She looks in turn at the reasons the women gave for their move into self employment, the wider social and political context to their decisions, how things changed between 1993 and 2010, the importance of the people who mattered (for good and ill) and, an area which has been little researched but which could form the subject of an entire book by itself, the increasingly elastic notion of retirement. The eldest of her contributors was born in 1942, and the youngest in 1963, giving her a substantial span of time in which to record the changes in the nature and status of women’s work.

The experience of reading the book is a mixed one. Cohen’s easy and lightly worn familiarity with the literature brings the reader into contact with a wide range of complex theoretical frameworks, many of which have been transformed over the past 20 years as employment becomes less structured. At the same time, you are invited into the lives of the women and it is easy to use their experiences to consider and perhaps question your own career narratives and those of the people around you.

The fragmented nature of the interview material, divided as it is into the various themed chapters, makes it difficult sometimes to feel strongly about the individual interviewees, but a few characters stick out, and these will be different for each reader. I was especially struck by the case of Sandra*, a former high flying sales executive, who set up her own print and stationery business after having a baby, and ran it successfully for many years, despite huge personal and economic challenges. She describes the business almost as a human, even a child, saying: “I love the business to death.” Strikingly, her love for her business is conceived at around the same time that her child is born, as she explained, “I just kind of hooked onto the business and it fed me and I fed it” (p. 67).

Work is seen as hugely important. The women speak about the detail of their jobs, and the values in inherent in them, and see work as a necessity, both for financial security and as part of their identity. Far from being seen as a source of achieving “work/life balance”, family and home commitments are seen as a challenge to overcome. Despite being subject to social disapproval, family limitations and sometimes overwhelming economic factors, Cohen concludes that the women “spoke with a strong sense of agency” (p. 46).

Theorists have often asked the question as to whether women’s career trajectories, and especially the well-known tendency for female managers to quit in mid-career, are characterised by subordination or resistance. Cohen argues that both – the avoidance of gender discrimination, and a sense of autonomy in deciding what to do about it – are not mutually exclusive but are “inextricably linked” in the women’s narratives.

This is an authoritative and thought-provoking book, which makes maximum use of the methodology of semi-structured in-depth interviews to reconsider many assumptions about the apparently straightforward notion of the career. It left me thinking about what the implications of this research might be for the two domains largely left out of this particular story: how men see their careers in our increasingly fragmented work environment, and where the myths of motherhood fit into women’s career imaginations.

* All the names are changed.

Ruth Garland is a researcher and PhD student in Media & Communications at the London School of Economics, having returned to study after 25 years working in media relations in publishing, broadcasting, public health and local government. She was a job-sharer for 13 years. She is researching into government communications. 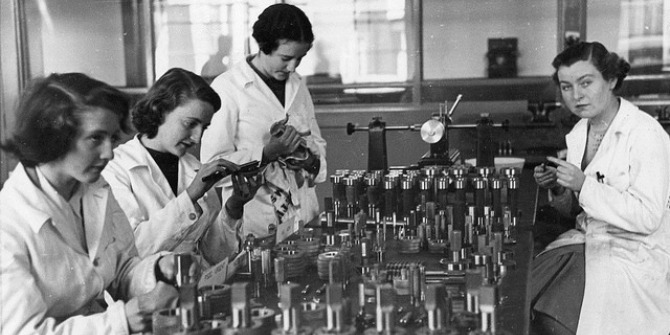