James Harkin considers the possible shift away from the mainstream and the rise of smaller companies in his recent book, reviewed by Alastair Hill. 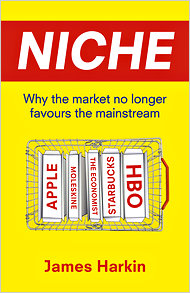 In Niche, James Harkin describes what he sees as a clear transition in the corporate environment in which a few corporate ‘big beasts’ have steadily come to be replaced by a multitude of smaller companies. He borrows metaphors from ecology to describe how these smaller companies have become successful by aiming for more defined ‘niche’ markets.

Whereas in the mid-to-late twentieth century the corporate ‘big beasts’ dominated consumer tastes at the top of the food chain, they are now faced with a wealth of different consumer populations within a new ‘ecosystem’, each demanding different, more unique, and ultimately more niche products. These ‘big beasts’ have become blinkered by a plethora of niche interests and consumer desires, and smaller more nimble companies have benefitted at their expense. There are now more brands and products available to consumers than ever before and the marketing of these is becoming increasingly receptive to consumer demand. Smaller companies can now create reliable brands around a small loyal fan base that then disseminate the brands quality via word of mouth. Apple, HBO, Starbucks and The Economist are all cases in point. This change has been brought about largely by the internet which has given consumers more access to increased amounts of information, but also by the increases take-up of psychological and sociological research by the companies themselves to meet consumer ever-demanding tastes.

It is a seductive theory, and Harkin’s fast-paced prose is full of details, examples, and illuminating insights from his own career transition from academic sociologist to consumer market researcher. The problem is that the wider theory is ultimately not borne out in practice. For starters, it is highly unlikely that many would feasibly describe Apple, Starbucks or HBO as niche companies. They are clearly contemporary ‘big beasts’, and they all clearly operate within the contemporary ‘mainstream’.

Rather than a shift away from the mainstream, it seems more reasonable to suggest that the ‘mainstream’ has been redefined. Apple, Starbucks et al may very well have started aiming at a niche, but they have evidently grown to dominate contemporary consumer tastes.

It is simply not the case that consumer markets are no longer dominated by big corporates. If anything the corporate ecosystem is dominated even more my big corporations than at any other point. The more fundamental paradigm shift is not a move away from the mainstream, but rather towards a new, more nuanced age of ‘big beast dominance’.

The new 21st century corporate ecosystem is clearly now a globalised one in which exists a new form of corporate predator. These predators are of course the modern multinational corporation. Such companies rarely compete directly in consumer markets but instead prey on other businesses through processes of mergers and acquisitions. The acquired companies are then often expanded or rebranded for the products to be sold in other global markets. Thus while Harkin is correct to suggest that more products and brands are available, it is misleading to suggest this has drastically altered the corporate ecosystem. If anything, the advent of multinational corporations operating in a globalised world represents an unparalleled stage of ‘big beast dominance’.

In the UK some markets are now almost entirely dominated by big multinationals, making it harder for smaller, and more niche rivals to enter and compete. Writers and columnists from across the political spectrum have recognised such problems. At the time of the Cadburys sale to Kraft Foods a memorable co-authored opinion piece by Will Hutton and Phillip Blond in the Financial Times heavily criticised Britain’s lax approach towards multinational companies acquiring smaller British companies. This approach was drawn in contradistinction to the approach of other EU states, and even the U.S. Indeed, a glance at the current British contemporary confectionary market would do well to illustrate the problem: a plethora of brands and products, but all owned by a handful of multinational corporations. Clearly this focus of ownership and capital produces sub-optimal results for both the consumer and the economy. The coalition Government’s plans to mount an overhaul of Britain’s 40-year-old competition regime are promising, but more needs to be done to ensure diverse, competitive markets which ensure that smaller companies who find and deliver to a niche can withstand being swallowed so easily by ‘big beasts’.

In sum, Niche is at its best in it’s more biographical moments in which Harkin discusses his time in the industry; how a floppy haired sociology graduate suddenly found himself in a large blue-chip employed as a ‘trend-hunter’, or ‘cool-spotter’ amassing data on consumer tastes. By contrast, its wider theories on the ‘move away for the mainstream’, and the decline of the ‘big beasts’ are misleading, if not erroneous.

Alastair Hill graduated from the LSE in 2010 in MSc Political Theory, and now works for a political consultancy company.

Book Review: The Economics of Enough: How to Run the Economy as if the Future Matters