As the Police Service of England and Wales navigates its way through a period of flux across organizational, cultural, and performance management lines, Bryn Caless‘s new book is a timely addition to the discourse on policing culture and practice. Tony Murphy finds that in many respects this book dispels some myths about the nature of policing at the top, but also lays bare the macho culture, suspicion, and dislike affecting officers at all levels. 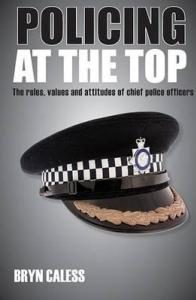 Drawing on interviews with almost one hundred chief police officers, those who hold a formal strategic command rank (Assistant Chief Constable, or commander in the MPS, and above), author Bryn Caless demonstrates an impressive level of access to some of the country’s leading police officers. In doing so, not only does he offer first-hand and often candid accounts of policing at the top, he is also able to gauge their attitudes towards many subjects, for example mooted reform, reporting mixed feelings regarding a national force and multi-level entry.

The author goes to some length in explaining his commitment to anonymity, which was no doubt crucial in securing the acquiescence of so many top cops. Yet, even with that assurance, the author cites instances where interviewees declare that they had “already said too much”. Careful homage is paid to Robert Reiner’s pioneering 1991 work in policing studies: Chief Constables: Bobbies, Bosses or Bureaucrats?. However, Caless is quick to note differences between his work and that of Reiner’s. Caless utilized a more expansive sample beyond just Chief Constables, and he had no inclination toward locating chief officer origins in some kind of socio-political matrix.

In many respects this book dispels some myths about the nature of policing at the top, whilst simultaneously giving weight to some common perceptions.

For example, Caless notes that there is scope for greater transparency regarding the process of progression and appointment for chief officers. He also cites chief officers’ accounts regarding how personal patronage from more senior officers, referred to by some as the “golden finger tapping them on the shoulder” (taken from Camelot National Lottery advertisements) played an important role in their progression, as did networking. Yet even then, Caless surmises that we can probably rest assured that those who do end up in those senior roles deserve it, having navigated their way through arduous training and selection processes. Such officers have “jumped all the hurdles”, and in doing so demonstrated strong leadership and motivational qualities, even if many had not set out to get that far on entering the police service.

A macho culture around working long hours is reported, often above 70 hours per week even though chief officers do not receive overtime pay. This has profound impacts on relationships and marriages, and many officers cited a lack of work-life balance. Furthermore, it is reported that most chief officers are insecure in their role, often lacking confidence. Pressures of the job and external scrutiny are cited as possible contributors. Fixed term appointments seemingly play a key role within this, exacerbating the sense that their very job is constantly under review. It is no wonder then that chief officers are generally sceptical of their colleagues according to the interview data. One interviewee asked “Do you know why police officers have big boots? … So that they can stamp on your fingers as you grasp the rungs of the ladder beneath them“. Another interviewee went so far as noting that his/her peers would “sooner fuck you up than look at you”.

Suspicion and dislike is not just reserved for fellow officers, Caless cites some very telling accounts of attitudes towards HMIC, the Home Office and police authorities (soon to be replaced by police crime commissioners). Many officers resented the “muddled amateurism” associated with the interference of non-commissioned stake-holders, as well as the politics deeply entrenched in such organisations. Interestingly, Caless makes a connection between the level of public accountability, as increasingly operationalized through HMIC’s remit and the heightened powers of police authorities, with the dislike for such bodies.

As for the future, above all else Caless paints a disturbing picture regarding the nature of policing at the top. The arrangements of governance, accountability and working conditions are problematic in the eyes of many chief officers. Added to this, is a common feeling that there is an expectation to achieve the same outcomes with fewer resources. Therefore, there is no great mystery concerning why so many top cops cited their insecurity, and their resentment towards external interference. As Caless remarks, such issues must be addressed, yet given the current trajectory, politics and “muddled amateurism” are set to continue to play important roles in the lives and practices of chief officers. Caless concludes, just as there is a police canteen culture, so too is there a chief officer culture.

In addition to being well written and accessible in its tone, the obvious strength of this text is the sheer volume of interview work conducted and level of access achieved by the author. The trends cited are supported not only by relevant quotations from interviewees, but there are also efforts to include statistics to demonstrate the prevalence of those issues cited. Caless also strives to offer a balanced account, readily citing accounts that contradict the general picture.

In short, this is an excellent book which is sure to become a standard text in the area of policing studies and criminology/criminal justice studies more widely.

Posted In: British and Irish Politics and Policy | Global Politics | Media and Politics