This is a perfect primer on the many contradictory and mysterious hallmarks of UK elections, a read of relevance to all with an interest in how politics works, writes Ben Mueller. 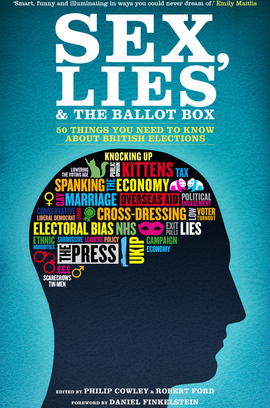 Sex, Lies and the Ballot Box: 50 things you need to know about British Elections. Philip Cowley and Robert Ford. Biteback. 2014.

Even seasoned thinkers about voting and elections can trip up over the peculiarities of the British electoral system. Nate Silver – he of The Signal and The Noise fame, guru of stats-nerds everywhere – has a flawless track record in predicting the result of every single US state in the 2012 Presidential Election (and 49 out 50 states in 2008, as well as almost every Senatorial and Gubernatorial race since 2008). In 2010, Silver tried to predict the UK’s General Election and got it badly wrong. His seat estimates were so inaccurate (Labour won 40 more, the Lib Dems 66 less, the Conservatives 31 more seats than Silver predicted) that even the problematic Uniform Swing models used in most of the British media proved more accurate. Where did things go wrong?

Nate Silver take note: it is possible to gain a firmer grasp of the manifold peculiarities that pervade UK elections. I can recommend no better way of doing so than to read Sex, Lies & The Ballot Box. The book is a ‘best-of’ of the most recent and topical insights British political scientists have to offer about UK democracy.

There are chapters about the formation of public opinion (as well as its measurement and the accuracy thereof), descriptions of British electoral attitudes and changes therein over the years, the impact of social relationships and neighbourhoods on voting patterns, the vicarious influence of local turnout on national election outcomes, varying political cultures across the UK, political geography (Wales, Scotland and England are vastly different in electoral terms), the chasm between local council and general election outcomes, the influences of class, age, race and constituency campaigning, the role of party leader images, the press, class… the list goes on. Each of the 50 chapters is but a few pages long, concisely packing lots of information (often incorporating graphs and tables) into a short amount of space and offering useful Further Reading tips at the end. The tone is highly readable, at once fun and informative and engaging to a wide range of audiences.

Particularly striking are the chapters that identify the core unpredictability of the upcoming election. Stephen Fisher, for instance, shows how tactical voting in a changing political landscape (i.e. the collapse of the Lib Dems’ support and the rise of UKIP) makes individual constituency contests more uncertain, creating both new incentives for voters to support other parties tactically and at the same time making it likelier that voters make mistakes in the process.

David Denver’s chapter on how constituency campaigning can exacerbate or ameliorate the swing vote in a constituency suggests that the Lib Dems, with their strong local canvassing operations, retain a fighting chance. Charles Pattie’s findings on the decline of marginal seats in an age of greater regional political polarisation – implying that larger national vote share swings are needed to unseat incumbent governments – have taken on particular significance in light of the developments surrounding party allegiance in Scotland (i.e. the implosion of Scottish Labour after the referendum).

Then there are contributions such as Caitlin Milazzo’s on how the attractiveness of candidates affects their probability of winning, further strengthening the point that each constituency race is best understood in isolation as a competition of ‘best fit’ between two, three or – in the age of UKIP – sometimes four candidates and their constituents. David Sanders discusses the contradictory interplay of personal economic conditions and the perception of the parties’ relative economic competence on electoral choices, which also muddies the prognostic picture.

The above is but a snapshot of what this book has to offer. It is hard to do the sheer variety of its contents justice: each of the 50 chapters goes beyond trivialities and summarises the key points surrounding some kind of complex electoral dynamic – and not a single one is a boring or stuffy read. Rather than focusing on particular chapters and creating the mistaken impression that the book has a particular theme or thesis, it is best to stress the sheer diversity of the various chapters. From women to UKIP, Wales to Prime Minister’s cats, voter emotions to the Internet, referendums to the Europe question, the ground covered is extensive, and fascinating. It would have been nice to see a chapter on the outcome of the Scottish referendum, since the constitutional and electoral fallout appears significant – editorial deadlines must have gotten in the way (to be clear, the Scottish referendum and its dramatic finish are covered in the book. The constitutional implications of the Tories’ proposals for future devolution, on the other hand, are not discussed).

In all, Sex, Lies & The Ballot Box serves as an antidote against predictive hubris. The key chapters are the ones that outline the essential capriciousness of election day in a localised FPTP contest. For instance, David Cutts shows how a single member in a household, through his/her choice to vote, is statistically likely to thereby cause his/her entire household to also vote – and that household will follow the single voter’s preference. This creates the potential for a local constituency swing to be amplified or ameliorated arbitrarily on polling day in a way that models cannot capture in advance. Throw in the confused tactical voting situation that arises in a race between Lab-Con-Lib-UKIP (as is the case in some constituencies this year), and the 2015 general election parameters becomes very fuzzy indeed.

Nate Silver is therefore unlikely to replicate his predictive successes anytime soon in the UK. Sex, Lies & the Ballot Box summarises of the reasons why that is the case. This makes it a perfect primer on the many contradictory and mysterious hallmarks of UK elections, a read of relevance to all with an interest in how politics works.