Christopher Hood’s latest monograph addresses a little studied, yet important phenomenon of public administration; blame avoidance and its impact on institutions. Hood draws together evidence from a range of examples throughout mature public administrative systems to explore the positive and negative effects of what has often been labelled a blame culture. Hood places the examples and analysis firmly within its political context and wryly begins his last chapter with a nod towards the cynicism that envelopes much political discourse by quoting former US Vice President Hubert Humphrey’s observation that “to err is human. To blame someone else is politics.”

Hood’s central argument is that understanding the structures, procedures and games employed in blame avoidance, in all its forms, is an important part of understanding political and organisational behaviour. It is also implicit in the way in which public sector managers and professionals design, deliver and evaluate public services and implement a range of public policies. Hood is careful not to over-emphasise the role of blame avoidance, noting that politicians and senior managers will also engage in “credit-claiming,” but it is “a powerful force in shaping the architecture and organization” of the public sector and “often dominates their standard operating routines”.

The book charts and defines the nature and different types of blame and blame avoidance, such as presentational strategies, agency strategies and policy or operational strategies, before discussing the relevance of these logical, but sometimes deviant behaviours for democracy and good governance. In the preface Hood observes that having become alerted to blame avoidance as a phenomenon you start to see it everywhere, and it is a concept that is discussed at all academic levels from the “abstruse philosophical” to petty individual grievances. The importance for those who study or practice public administration (as well as corporate managers) argues Hood, is that blame avoidance leads to a handling of risk that is often inflexible and unintelligent. Given the focus on blame and the desire by the media, the public, and politicians to find scapegoats to blame when things go wrong, Hood believes that “potential losses are commonly weighted more heavily than equivalent gains,” something that is sometimes referred to as “negativity bias.”

In taking us through the permutations and definitions of the concept and its actualization in the form of structures, impact and possible outcomes, Hood employs a style and approach that is open and engaging. Certainly it is cerebral and analytical, but he does not shirk from using what at times is a matey almost tabloid style. For example, when discussing the perspective of street-level bureaucrats and service professionals, her refers to their perception that, “the top bananas and the people in the middle levels will naturally want to place the blame firmly at the door of the individual;” that is the individual public servant involved in an accident or error of some kind. He writes of middle managers as being the “meat in the sandwich” caught between credit seeking politicians and blame avoiding professionals, a perspective with which many of his potential readers will identify.

There are obvious links to some of Hood’s earlier groundbreaking work on New Public Management, such as when he is discussing the different strategies through which senior policy makers can seek to avoid blame. He includes in these a greater recourse to markets and marketization for the delivery of services, the use of quantitative managerial measures and devolved responsibilities and other NPM techniques. All of which provide a veneer of deniability to senior policy makers should they need to insulate themselves from accidents and disasters in part caused through strategic decisions on budgeting, training and general operating procedures.

Hood concludes that although blame avoidance has probably always been with us in various forms, in modern public administrative systems it can be found “wherever motive combines with opportunity. Motive will be strong when potential blame takers have high stakes in preserving their future careers and when potential blame makers can reap benefits from blame arbitration activity”. In part this is a product of the rise of professional politicians, generic managers, who lack the technical skills and experience of those professionals they supervise, plus a substantial increase in legal oversight and review and the search for compensation powered by the legal profession; all exacerbate the negative aspects of the blame culture.

But it also has positive elements. For example blame and the fear of blame also lead people to shy away from breaking or bending rules designed for the preservation of good health and safety, or the prevention and detection of corrupt practice. What Hood labels “blameworld” also serves to keep people honest (in deeds if not in thought) and ensures compliance to norms of behaviour that ensure public servants are conscious of their wider duties to the citizens who provide their employment. In a world where shame has ceased to be a conditioning factor in behaviour, blame has replaced it. In other words, although we may be becoming shameless, we can never be entirely blameless.

Andrew Massey is Professor of Politics at the University of Exeter. He has worked in a range of areas including British, European, and US policy and politics. His main areas of research include comparative public policy, public administration and issues around the reform and modernization of government and governance at all levels in the UK, US, EU and increasingly globally. He also have a long standing interest in energy policy, especially civil nuclear energy; professionalism and ethics and accountability. Read more reviews by Andrew. 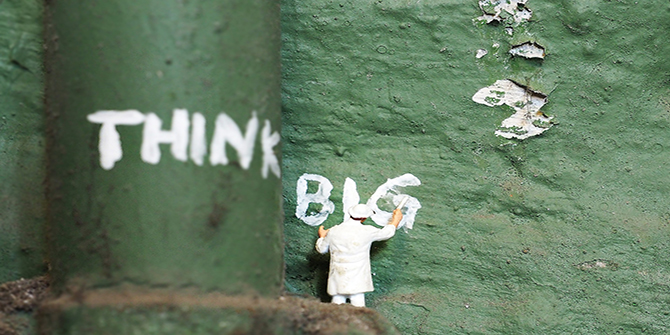