The Clash of Economic Ideas interweaves the economic history of the last hundred years with the history of economic doctrines to understand how contrasting economic ideas have originated and developed over time to take their present forms. It aims to trace the connections running from historical events to debates among economists, and from the ideas of academic writers to major experiments in economic policy. This is an ambitious and largely successful attempt at a big-picture overview of decades of debates and experiments in economic policymaking, writes Natacha Postel-Vinay. 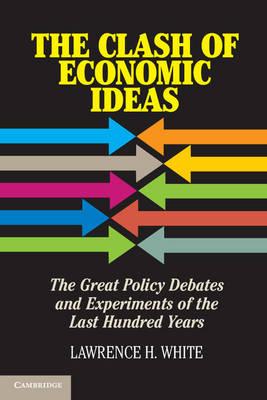 Across Europe, many are watching in both horror and amazement as economic history unfolds before their eyes: Cypriot depositors getting taxed by order of the European Commission; the British government coming up with yet another austerity package; and even France is considering balancing its budget. Many must wonder how governments make and reach these drastic decisions, given the conflicting advice (or the lack of advice) they receive from economists, think-tanks, and journalists. The Clash of Economic Ideas, by economics professor Lawrence H. White of George Mason University, may not give many clues about the origins of individual government decisions made in the current crisis. But the book does offer a comprehensive account of how economic thought influenced world policymakers – and vice versa – not only just before the crisis, but since 1900. This is a notable achievement, and despite its partiality it is recommended reading for anyone from the top levels of government to the lay workers questioning why they pay any taxes at all.

The scope of the book is impressive in itself. It is a 400-page grand tour of past attempts by economists and policymakers to answer the following question: what role, if any, should the government play in the economy? In fourteen chapters White moves easily between the history of economic thought to the history of economic policy, starting with “the turn away from laissez-faire” and Bolshevism in the early twentieth century to the Great Depression, Bretton Woods, and sovereign debt crises. The colourful, well-structured, and crystal-clear theoretical explanations make for a truly gripping tale.

Some may be irked by the book’s tacit anti-government stance. Even Hayekians have cause for complaint, since White is never explicit about that stance but defends it under the cover of a matter-of-fact report of past debates. As a public figure, White does not usually conceal his preference for the Austrian perspective: witness the series of interviews on the Great Recession on econtalk.org. The book recurrently tackles the issue of the scope of government intervention needed to deal with certain economic problems. And as White makes a point of neatly elucidating arguments for and against certain forms of intervention, at first sight it may look like he is providing an entirely fair account of all views.  Nevertheless he ends most chapters with a forceful Hayekian argument, giving the impression that no reply from the other side of the spectrum is possible. And on occasion he passes over some intricacies of the Keynesian case, only sketching out, for instance, the points in favour of his liquidity preference theory. Overall, however, White provides a fairly balanced account.

The book therefore has much to teach its readers, even those well versed in economic theory, and, to some extent, economic history. Non-specialists will, for example, be interested to learn that the idea of an interventionist government has deep roots, going back much further than the publication of Keynes’s 1936 General Theory. Indeed, at the end of the 19th century in the U.S., the Progressive Era saw the advent of institutionalism and growing criticism of the “invisible hand” theories favoured by classical economists. Even the foundation of the American Economic Association (which today remains the U.S.’s main economics society) was led by Richard T. Ely, a prominent institutionalist.

Roosevelt’s New Deal had few truly Keynesian elements. Indeed, recommendations for the New Deal came directly from economist Rexford Tugwell, who viewed the depression as a consequence of overproduction by mindless businessmen, and whose preferred solution was government control of production through strict quotas and price controls, hence Roosevelt’s creation of the NIRA codes in 1933. Keynes himself quickly saw the flaw in this programme: the idea was to increase prices by restricting production, but of course there would be no clear incentive to reinvest profits. And indeed unemployment did not go back to pre-depression levels before the Second World War.

Another point of interest is White’s challenge to the widespread view that in the face of depression Hayek recommended doing nothing. In fact, Hayek pointed out that before the creation of central banks, banks would mitigate the effects of liquidity shortages through the action of clearing house associations. He inferred that in the Great Depression the Federal Reserve should have tried to mitigate those effects by injecting at least some liquidity into the system (although Hayek never said how much).

To these examples can be added plenty of illuminating yet relatively unknown pieces of history. These include the French origin of the expression “laissez-faire,” as well as the significant roles played in the 1950s by the Fabian Society in Britain on the one hand, and by the Ordoliberalists on the other, in the rise of the British welfare state and in the deregulation of the German economy respectively, not to mention economist Paul Samuelson’s 1960s prediction that the Soviet economy would eventually overtake the U.S. economy.

Specialists might reasonably object to White’s vision of constant opposition between polarized ideologies, especially between planners and free-marketeers. But this is a natural consequence of White’s ambitious – and largely successful – attempt at a big-picture overview of decades of debates and experiments in economic policymaking. For instance, he efficiently summarises the Keynes vs. Hayek debate in the following way. First, Hayek emphasised government policy mistakes to explain the Great Depression (in particular the role of the Federal Reserve in keeping interest rates artificially low in the 1920s), and as a solution recommended only very minor government intervention. Next, Keynes argued that the economy collapsed on its own (through a “loss of nerve” by investors), but that government should actively stimulate it to enable recovery. The book contains many other nuggets of this kind, whether about Oskar Lange and the socialist calculation debate, or the rise in influence of Milton Friedman once the Keynesian Philips curve (a trade-off between inflation and unemployment) was seen not to apply everywhere.

All things considered, The Clash of Economic Ideas is highly enlightening. Some important questions seem to be strategically avoided, such as those relating to government healthcare provision, to the potential usefulness of banking regulation, or to government policy recommendations in the face of a recession coupled with high amounts of public debt. Nevertheless the book strikes a right balance between generalisation and detail, making it a fascinating read.