Faiz Sheikh considers James A. Yunker‘s analysis of Eurosceptic thinking and the historical treatment of the idea of world government, finding an accessible introduction to the ideas and obstacles facing a liberal democratic world state through the ages.

The Idea of World Government: From Ancient Times to the Twenty-first Century. James A. Yunker. 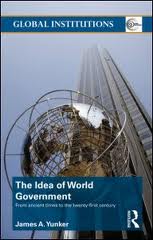 An Economist by profession, Yunker has written five books and a plethora of articles on various economic topics, as well as occasional writings on political economy and international relations. In his latest book, The Idea of World Government, the author tackles the topic of international relations history. With the Treaty of Lisbon in effect as of the end of 2009, and the current government full of Eurosceptics, no less so than the Prime Minister David Cameron, Europe remains high on the political agenda. But the European Union, according to Yunker, is but the tamest form of integration on which to model a world government. As such, the book reads as an analysis of Eurosceptic thinking, though with an explicitly wider focus on global rather than European integration.

Yunker’s book makes many assumptions in the early pages. Such assumptions are perhaps necessary for the book to be as concise as it is, running at only 128 pages. Chief among them are assumptions about the nature of humanity as selfish and warlike in our pursuit of security. Parallel to such inherent behaviour is a desire for peace, which causes humans as individuals to group into societies. For Yunker this is self evident, he proclaims that government is “good” at the local level and “good” at the regional and national level. His purpose then is to assess if government remains “good” at the international level. The trouble with such assumptions is that they make his argument ambiguous. Using phrases such as “it has been obvious” that government is good, makes the reader question the veracity of the statement. Why is government good? Which government is good? In what ways is it good? All these are questions remain unanswered in this book, but that does not detract from the whole, as long as the reader is willing to accept his assumptions are not necessarily facts.

Of six chapters, five deal with historical treatment of the idea of world government, with the final chapter offering up Yunker’s own conception of the ‘world state’, its powers, functions etc. Such a break down of content betrays the actual function of this book as a tool for students of international relations history. Rather than “summarizing the lessons of history”, the vast majority of the book is dedicated to that summary, leaving little room for the absolutely interesting contemporary analysis of a world state contained in the final chapter, a construct Yunker defines as the “Federal Union of Democratic States”.

Two more latter stage assumptions that underpin Yunker’s book need to be addressed before closing the review. Firstly, Yunker tries to make out that with the end of the Cold War, there are no longer any significant ideological differences impeding the creation of a liberal democratic world government. This is all too reminiscent of “End of History” type arguments made twenty years ago, and simply does not hold true with the advent of Islamic radicalism, for example. Secondly, Yunker repeatedly refers to the idea of world government without acknowledging that there exist many differing conceptions of supranational governance. In accordance with the previous “End of History” assumption, Yunker’s book deals exclusively with the liberal democratic, free market global state. Such specificity is not a negative in such a concise work, but readers hoping for a grounding in various concepts of world government will be disappointed.

All told, The Idea of World Government is a very accessible introduction to the ideas and obstacles facing a liberal democratic world state through the ages. It is a short work written in an easy to read style with many illuminating parallels between contemporary problems with world government and the problems of time gone by. While the book does not rely on political theory too much, which aides the accessibility of the book, this leaves many assumptions ambiguous, as pointed out earlier. Bearing these assumptions in mind, and acknowledging the size of the book and the easy-to-read style of writing, Yunker’s work is an excellent introductory volume for international relations students, policy makers without a background international relations and casual readers alike.

Faiz Sheikh is a PhD student at the University of Leeds.