John Van Reenen and Nitika Bagaria respond to the recent bad news on government borrowing by modelling three different fiscal consolidation scenarios. They argue that all scenarios point to the economy returning to long-run equilibrium, but note that the policy prescription to delay deficit reduction until after recovery is clearly under way is the most valid.

Based on figures released by the ONS on Tuesday, the UK government had to borrow money in July, traditionally a good month for tax receipts. Public sector net borrowing was £0.6 billion in July 2012 – £3.4 billion higher net borrowing than a year ago. The public sector current budget surplus had decreased to £1.2 billion in July 2012 from a surplus of £4.2 billion last year. These figures come despite the UK announcing fiscal consolidation measures amounting to a total of 7.4 per cent of GDP over the fiscal years 2011–12 to 2016 –17. What went wrong?

At the time of its announcement, many argued that consolidation should be delayed until recovery was clearly established. During a prolonged period of depression when unemployment is well above its “natural” rate (the NAIRU), short-term interest rates are effectively at zero and output substantially below capacity the impact of fiscal tightening may be much worse than in normal times. Others argued that early action was required to prevent large deficits leading to higher interest rates. However, few on either side attempted to quantify the costs and benefits of delay. Our new research published this month research attempts to do just that.

Why standard macro models got it wrong
In the standard macro models used by most central banks and finance ministries, the impacts of fiscal policy are small and short-lived. Firstly, with an inflation target, central banks will largely offset the impact on demand of changes to fiscal policy. Secondly, fiscal multipliers don’t vary much, if at all, across the cycle, so it doesn’t matter much when consolidation is undertaken. Thirdly, the strong equilibrium-reverting properties of such models means that output tends to revert to trend in any event.

However, these assumptions are all questionable. First, interest rates, both short and long term, are currently extraordinarily low, despite very high deficits. Under normal circumstances a tightening in fiscal policy can be expected to be accommodated by a relaxation in monetary policy. However, with interest rates already at exceptionally low levels, further tightening of fiscal policy is unlikely to result in such an offsetting monetary policy reaction.

Second, in normal times, the ability to borrow enables households and firms to smooth consumption and investment over time, reducing the impact of fiscal policy. But, during a downturn when unemployment is high and job security low, a greater percentage of households and firms are likely to find themselves financially constrained. This is likely to be particularly acute when the downturn is driven by an impaired banking system.

Third, long spells of depressed output and high unemployment can lead to ‘hysteresis’ which keeps the productive capacity of the economy persistently or even permanently lower. Extended periods of depressed output and high unemployment can have long-term implications for the productive capacity of the economy. A host of mechanisms could be responsible for these hysteresis effects. These include reduced capital investment, premature capital scrapping, reduced labour force attachment on the part of the long-term unemployed resulting in lower wage pressures, scarring effects on young workers who have trouble beginning their careers and changes in managerial attitudes. In particular, the incidence of long-term unemployment may reduce the downward pressure on wages exerted by a high general unemployment rate and thus lead to unemployment hysteresis or persistence long after the shocks have dissipated.

The long-term unemployed are less likely to look for, or to get, jobs, and may suffer permanent damage to skills and motivation. This may reduce the efficiency of the labour market, damaging output and employment; the existence of these hysteresis effects in the UK labour market are well established, but rarely incorporated into macroeconomic forecasting.

Making macro-models meet reality
We use the National Institute’s macro, NiGEM, to model all three of these effects. We assume that monetary policy would not in practice have responded to changes in fiscal policy, with interest rates at the zero lower bound and demand depressed; we assume that a higher proportion than normal of consumers and firms are credit constrained; and we incorporate into our wage determination equation the impact of current elevated levels of long-term unemployment.

We contrast three scenarios: (i) the consolidation plan implemented during a depression; (ii) the same plan, but with implementation delayed for three years when the economy has recovered; and (iii) no consolidation at all. The modelling confirms that doing nothing was not an option and would have led to unsustainable debt ratios. Under both our “immediate consolidation” scenario and the “delayed consolidation”, the necessary increases in taxes and reductions in spending reduce growth and increase unemployment, as expected. But our estimates indicate that the impact would have been substantially less, and less long-lasting, if consolidation had been delayed until more normal times. The impact is partly driven by the heightened magnitude of fiscal multipliers, and exacerbated by the prolongation of their impact due to hysteresis effects. The cumulative loss of output over the period 2011-21 amounts to about £239 billion in 2010 prices, or about 16 per cent of 2010 GDP. And unemployment is considerably higher for longer – still 1 percentage point higher even in 2019. 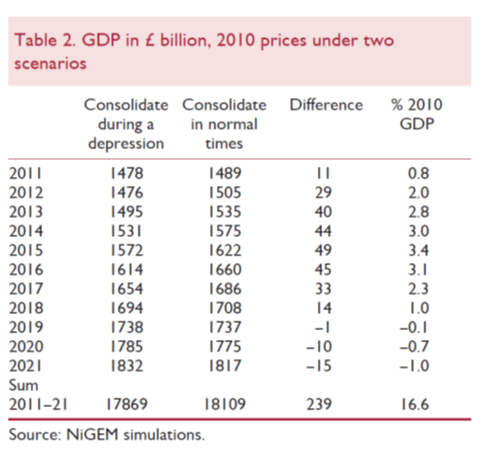 It is important to say that these are scenarios, not forecasts; our modelling could be overestimating or indeed underestimating the impact of delay. The choice of 2014 as a time when the economy would have returned to normal is arbitrary, and of course in reality wider global economic developments could well have changed that in any case. But they are a useful illustration of why, and how much, macroeconomic policy judgements matter.

Conclusions
The concern today is that the Great Recession starting in 2008 and the consequent early fiscal tightening policies may lead to significant losses in output and a protracted period of high unemployment. The recent public finances data release and the analysis presented in this note indicate that these concerns are well-founded. The good news is that, in the long run, in our model at least, it does all wash out; whatever the path of consolidation, the economy eventually returns to long-run equilibrium. What this analysis shows is that the economic pain resulting from fiscal consolidation could not have been avoided, but could have been substantially reduced. The standard policy prescription – to delay deficit reduction until after recovery is clearly under way and the output shortfall significantly reduced – remains valid.

John Van Reenen is the Director of the Centre for Economic Performance(CEP), Europe’s leading applied economics research centre. He is also a Professor of Economics at the London School of Economics and Political Science. He tweets at @johnvanreenen

Nitika Bagaria is a doctoral candidate in Economics at the London School of Economics. She is a member of the Productivity and Innovation Programme at the Centre for Economic Performance.  Her research interests include Labour Economics, applied Industrial Organization and economic development. She tweets at @nitiks 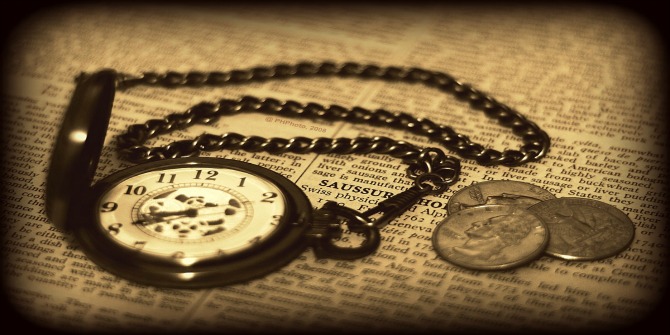