What do we have to show for thirty years of makeovers in UK central government? Has a relentless focus on cost-cutting damaged traditional administrative values? In a wide-ranging study of UK central government, Christopher Hood and Ruth Dixon found that not only did formal complaints and legal challenges to central government rise sharply over the three decades up to 2010, but government administration costs also increased by two-fifths in real terms – even though the civil service lost a third of its staff. They conclude that traditional headcount reduction measures do not guarantee a reduction in costs and may lead to more complaints and challenges.

Over the past three decades or so UK central government has had repeated successive and much-hyped reform initiatives ostensibly designed to make the government machine work better and cost less. Indeed, it has been claimed that the UK public sector may have been cumulatively the most reformed in the world over that period. So what do we have to show for all those busy decades of reform?

Opinions vary. Perhaps the commonest view among academics studying government reform is the sceptical verdict that pressures for cost-cutting came at the expense of traditional administrative values – careful rule-application and consistency and fairness in handling cases. But such views are often based largely on assertion and anecdote. What does the documentary evidence show?

A rise in complaints and legal challenges to government

Arguably the most direct indicator of how carefully and consistently government organizations apply rules and handle casework is the incidence of formal complaints and legal challenge. If case-handling is seen as careless, unfair or inconsistent, such perceptions are likely to be reflected in an increase of such complaints and challenges. And broadly the evidence does seem to fit with the received view, as shown in Figure 1. Complaints to Ombudsmen at both central and local government level soared over the past thirty years, particularly in the 1990s. Legal challenges substantially increased too, roughly doubling between the 1980s and the 1990s, and thereafter showing a pattern of continued steep increases in immigration cases but relative stability for the rest. The story is a lot less dramatic if you put more weight on the incidence of challenges that are upheld or do not fall at the first stage of the process, but even then there was some increase over this period. From that evidence, it seems hard to argue that government worked better in that traditional case-handling administrative sense. What is debatable is whether performance in rule-application and case-handling should be judged to have got a bit worse or a lot worse on such evidence.

Figure 1: Has government worked better in the case-handling sense?

A rise in government administration costs

As for cost-cutting, far from falling, the administration or running costs of UK civil departments actually rose by about two-fifths in constant-price terms over the three decades from 1980 to 2010 – a performance not very different from the trajectory of administration costs of English local government over the same period. So, as Figure 2 shows, government cost more, not less, to run in constant-price terms over this period of supposed slash-and-burn managerial cost-cutting. When we look at the pattern more closely, that increase in administration costs turns out to have come from non-payroll items such as consultancy and IT, while paybill – what it cost to hire civil servants – stayed roughly the same in constant-price terms over the period as a whole. But even though the paybill changed little in real terms, no less than one civil servant in three disappeared from the payroll over these three decades (far surpassing Milton Friedman’s 1977 proposal for removing one civil servant in six from the public payroll, then mostly dismissed as a far-right fantasy). That pattern might go some way to explain why there might have been fewer resources to handle complex casework, resulting in a higher incidence of complaints and challenges. 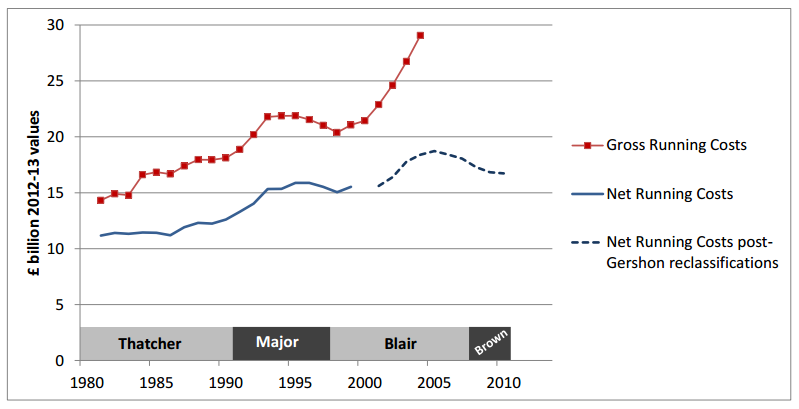 On this analysis, therefore, the received view about the effect of public service reforms seems only partly correct; there is some evidence that government performed somewhat worse on traditional administrative tasks involving careful and consistent application of rules, but running costs rose, not fell.

What can we learn from this analysis? One thing is that it takes more to cut running costs in government than cutting numbers of civil servants – something that seems to have escaped the Thatcher government in the 1980s but has been clearly recognized in the current government’s much more determined attempts to rein in consultancy and IT contract costs. A second is that successive government makeovers tend to destroy the very statistical evidence on which those makeovers can be judged, for example in making it impossible even for experts to say whether ‘running costs’ have changed or simply been reclassified (the classic ‘Sir Humphrey’ method of reducing administration cost figures). To see if government performance really has improved over a generation, we need ‘makeunders’ as well as makeovers (that is, the ability to strip away cosmetic and other egregious changes so that like can be compared with like over time). Third, given that formal complaints and legal challenges rose so sharply over this period, it is remarkable how few of the many makeovers started from a careful analysis of what citizens or users repeatedly complained about and how detached public management policy tends to be from the world of complaint-handling and litigation.

This article, which appeared originally on Politics in Spires, is based on Christopher Hood’s Valedictory Lecture as Gladstone Professor of Government, 9th June 2014, All Souls College, Oxford, and on his forthcoming book with Ruth Dixon, Beyond the Hype: Evaluating Three Decades of Reform and Change in UK Government (to be published with Oxford University Press). Part of this research was funded by the Leverhulme Trust.

Note: This article gives the views of the author, and not the position of the British Politics and Policy blog, nor of the London School of Economics. Please read our comments policy before posting. Featured image credit: Cliff

Christopher Hood is Gladstone Professor of Government and Fellow of All Souls College Oxford and ESRC Professorial Fellow 2011-2014. He tweets from @C_C_Hood

Dr Ruth Dixon is Leverhulme Trust Postdoctoral Researcher at the University of Oxford, working in the Department of Politics and International Relations. She tweets from @Ruth_Dixon

The first minister is forced out of the Cameron-Clegg team – does it fit recent trends in ministerial resignations?

Oliver Letwin’s dumping of personal documents reminds us that the Data Protection Act is there to protect all of us.

Civil servants are leaving the public sector in droves, highlighting the increasingly troublesome relationship between the executive and the ‘machinery of government’