Looking at trends in poverty through the lens of family size reminds us of the essential role played by social security, and raises questions about the increasing focus on employment as the route out of poverty, argue Kitty Stewart, Aaron Reeves, and Ruth Patrick

Statistics out this month revealed that more than one million UK children now live in households affected by the two-child limit – the policy that has restricted means-tested support to the first two children in the family for new births from 2017. Supposedly introduced to ensure fairness in the benefits system, it would be hard to design a policy  more effective at driving up child poverty.

But as our new research shows, poverty was already rising sharply among families with three or more children in the years before the two-child limit took effect. In fact, we reveal a little noted and certainly little discussed fact – almost all the change in child poverty in the UK over the last 25 years has taken place among larger families (Figure 1). This is true both of the fall in poverty that took place from the late 1990s to early 2010s and of the rise in poverty from 2012/13, and holds whether we look at poverty before or after housing costs. 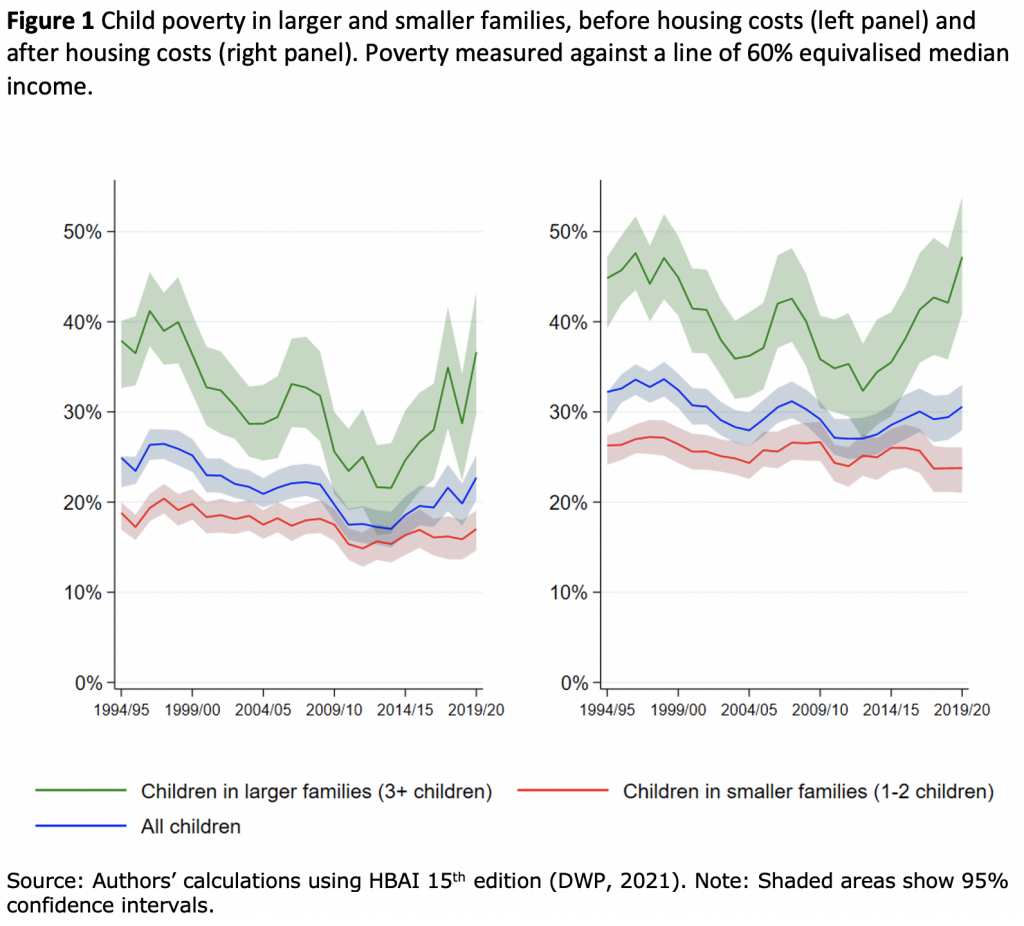 These trends are especially striking given that until the introduction of the two-child limit (and to a more limited extent the 2013 benefit cap) there was no policy directly targeting larger families, either for better or worse. What explains these different patterns, and what do they tell us about the effectiveness of different strategies to reduce child poverty?

First, our analysis underlines the vital importance of social security support for families with additional needs. No new or original insight, this was identified in Seebohm Rowntree’s original poverty surveys and was central to Eleanor Rathbone’s campaign for family allowances in the 1940s. Yet it is a point that receives too little focus in current debates.

There are two reasons why larger families are more likely to be in need of financial support, and therefore more exposed to changes in benefit policy: they have higher consumption needs, which are not reflected in wages; while increased caring responsibilities mean they face greater constraints to labour market participation. These factors mean larger families will on average have a higher share of income from benefits in overall household income than smaller families. This leaves them especially vulnerable to changes in social security provision, even without targeted efforts to take support away from them directly, as in the case of the two-child limit.

As a result, larger families saw the greatest reductions in their risk of poverty when social security support for children was expanded under Labour – and they have suffered most from the cuts to support since then, such as the limited uprating of most working-age benefits from 2013 and the cash freeze from 2015-20. It is remarkable to see how closely changes in the effectiveness of the tax transfer system, shown in Figure 2, map onto the overall poverty trends in Figure 1. Social security benefits are both essential and effective in reducing child poverty. 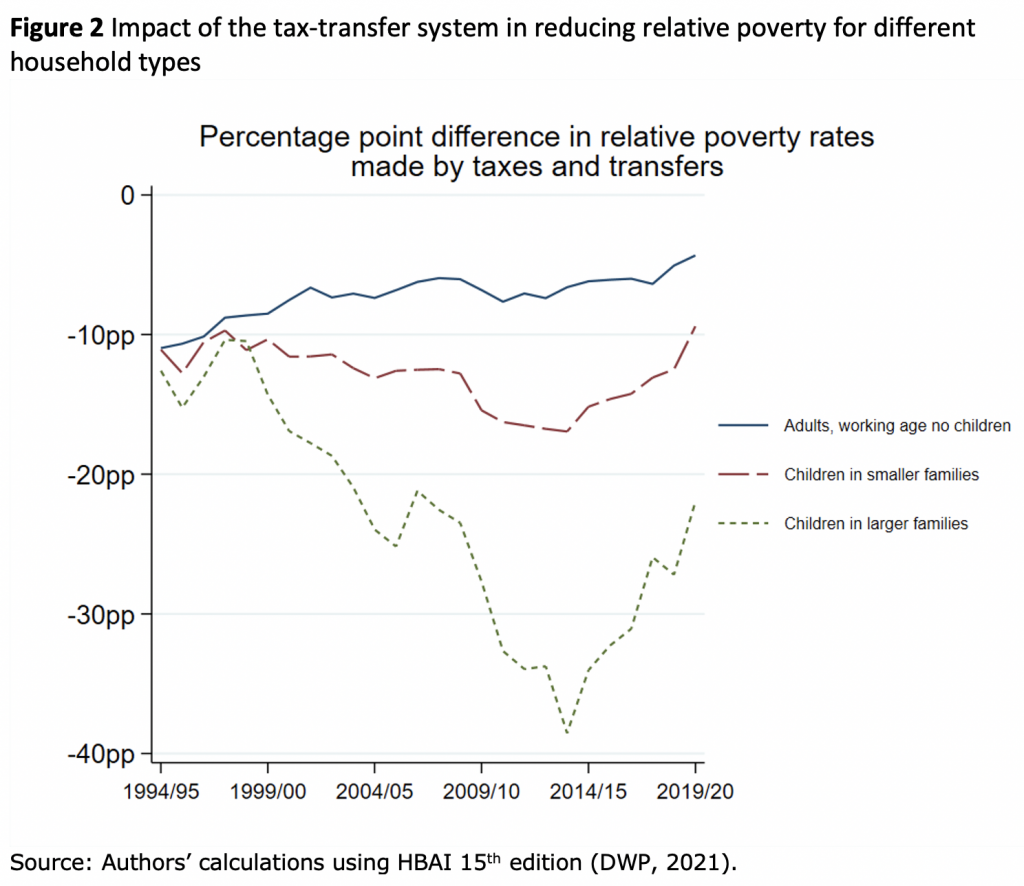 Examining rates of poverty before taxes and transfers reveals something else which is key to thinking about anti-poverty strategy going forward. Figure 3 shows that pre-transfer poverty rates have been rising steadily over time for all working families with children, but more sharply for larger than smaller families. In part this is because of rising poverty rates among households working at less than full intensity, which includes lone parents working part-time and couples working combinations such as one parent full-time and one part-time or at home – the most common working patterns for couples with three or more children. We show in the paper that parents in larger families are working more – but parents in smaller families are working more still – and as we measure poverty in relative terms, this means an ever-moving target.

In addition, though, pre-transfer poverty is also rising in households where all adults are working full-time, as the yellow dotted lines in Figure 3 demonstrate. Poverty risk is rising particularly quickly for larger families in this situation, which may reflect the greater constraints on the type of work available to families who have to balance work with greater caring responsibilities. 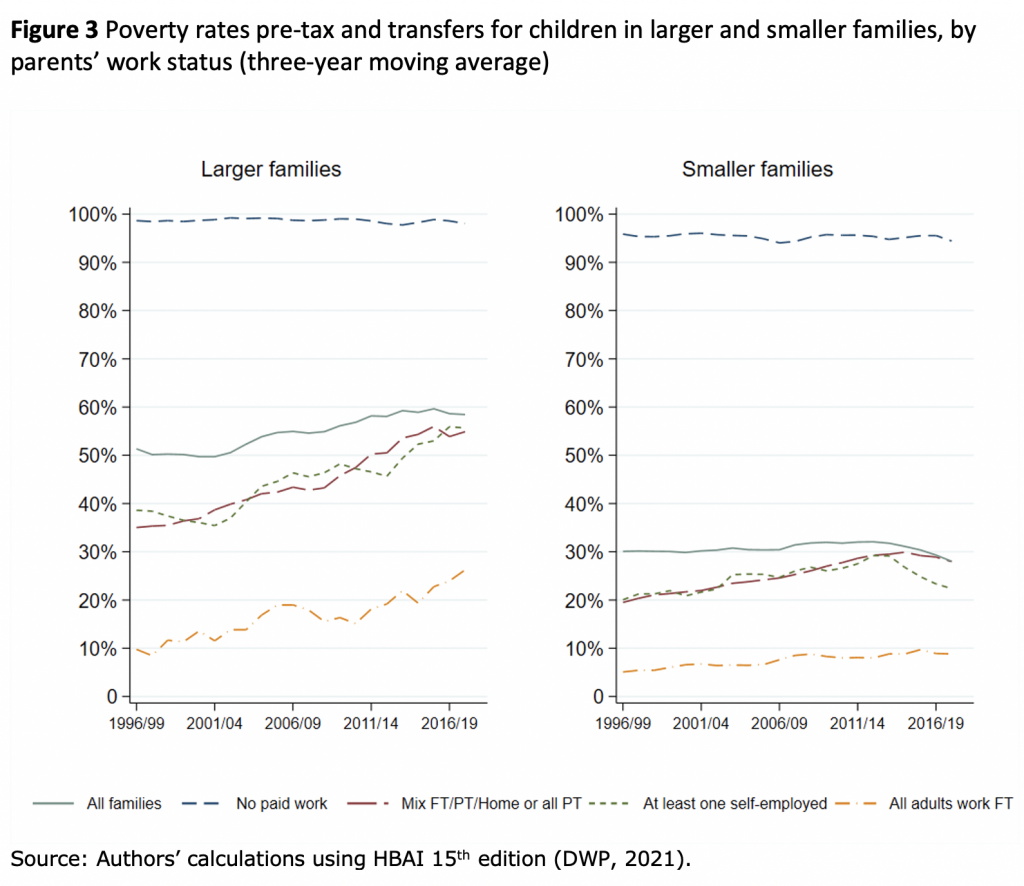 As well as working more, parents are considerably more likely to have spent longer in education than was the case 25 years ago. Yet while education and employment have been increasingly emphasised as the solutions to poverty, these strategies are clearly not working. For larger families in particular, the social security system is left with ever more work to do.

One conclusion is that we urgently need to pay more attention to the nature and quality of paid work, an argument on which there is increasing agreement. We also need to think about access to affordable childcare, and about ensuring more jobs are flexible and family-friendly, to increase the options open to those with caring responsibilities.

But our findings also suggest the need to challenge the assumption that parents must work ever more to pull themselves out of poverty. There is a logical flaw in a strategy that seeks to tackle relative poverty in this way: families that have greater caring responsibilities are unlikely ever to be able to work at the same rate as those with fewer, however affordable childcare becomes. There are also questions about whether they should be expected to, especially where parents want to prioritise the equally important and demanding work of parenting and care. A work-first and work-more approach raises normative questions about the kind of society we want to live in. Do we want it to be necessary for all parents to work full-time when their children are young if they are to avoid poverty? Or would we rather live in a society where it is possible to make choices around the balance of care and paid work, especially when children are young?

The government’s argument for the two-child limit is that families who receive support from the benefits system should face ‘the same financial choices’ as those supporting themselves solely through work. Our research suggests this is a nonsensical distinction. Very many – indeed most – larger families will need support through the tax-transfer system during this period of the lifecycle. This is true even when parents are in paid work, both because of higher consumption needs and because of the additional caring responsibilities which may constrain work hours or job choices. But this increased need covers a relatively short period of the lifecycle, and a period in which adults are contributing in other ways too. Indeed, if we widen ideas of contribution to encompass reproductive and caring work then adults in larger families are potentially making the greatest contribution of all.

Seen like this, the need for more financial support for larger families is about life cycle redistribution and interdependence, not about two distinct long-term categories. The evidence in our paper indicates that we must either embrace this interdependence or accept that only the wealthiest families should be able to have more than two children, and that high and rising numbers of children will grow up in poverty because of their family size.

Kitty Stewart is Associate Professor of Social Policy Associate Director of the Centre for Analysis of Social Exclusion (CASE) at the LSE.

Aaron Reeves is Associate Professor of Evidence-Based Social Intervention and Policy Evaluation at the University of Oxford.

Photo by Sandy Millar on Unsplash.

Shifting demographics mean that the NHS must change. To cope with these new demands we must radically reassess how we design services and use technology to provide care.