To cope with austerity, local councils were encouraged to pool resources and share back-office administration (e.g. legal counsel and internal audit). Was this type of collaboration worth it? Thomas Elston and Ruth Dixon find no evidence that sharing administration or tax services has helped councils manage budget cuts.

Whether by historical standards, or compared with other parts of the public sector, the financial settlement awarded to English local government in 2010 was undoubtedly tough. As the Coalition Government sought to manage a perilous fiscal situation through a combination of modest tax rises and far more significant spending cuts, grants to councils were reduced in cash terms by 28% over four years, amounting to a real-terms cut of 40%. Faced with limited ability to make compensatory increases in local taxes, and growing demand for public services following the recession and long-term demographic changes, local government finances and services were at serious risk.

But all was not lost. Councils could, the government urged, alleviate some of the pressure by working collaboratively to pool resources and overcome diseconomies of scale. Indeed, for a number of years, Whitehall had encouraged greater “sharing” of services across council areas – as is widely practiced in Europe and the USA, but not typically in England. By 2012, the government had published guidance, Fifty Ways to Save, which ranked shared services first out of 50 promising examples of “sensible savings.” And while not known for enthusiastically embracing central government reform edicts, on this occasion English councils acquiesced. By 2016, over 75% of local authorities (including nearly 90% of lower-tier district councils) were party to one or more arrangement for sharing back-office administration (HR, audit, legal services, etc.) – an area of council activity widely regarded as among the easiest and most-obvious of candidates for consolidation.

Of course, this style of public management reform was very much in vogue in Britain and internationally at the time. What is more, scores of top-performing multi-divisional firms had already moved to shared back-office operations and, reportedly, achieved savings of 20-40%. A significant advisory industry of consultants and management “gurus” emerged to help public managers replicate these remarkable successes. And yet, as so often is the case, the pace of reform far outstripped that of evaluation. Independent, quantitative evidence of the financial impact of sharing (in the public or private sector) was almost non-existent (and did not support the alleged benefits), while qualitative evidence focused on reform processes rather than outcomes. Consequently, at a time of great resource scarcity, policymakers took a gamble in investing so heavily in this unproven fix.

So, was collaboration part of the answer to austerity? Did sharing back-office administration help councils to manage “the worst financial settlement in living memory”? To investigate, we performed multi-wave change-score regression analysis on organizational and financial data from the 317 (out of 353) English local authorities for which sufficient financial data was available during the period 2008-16. Our focus was on changes to councils’ administrative spending relative to frontline spending – known by organizational researchers as “administrative intensity”. Councils that share back-office services were identified from the Local Government Association’s “Shared Services Map” dataset, which we coded for the level of participation in such collaborations. To allow for a realistic lag period between the adoption of the reforms and any observable savings, only shared services established before 2015 were included in the analysis.

We found that administration costs fell on average relative to total spending across the period 2008-2016. The size of this reduction varied by council type, with, in particular, district councils showing a greater relative fall than other types of council (though from a much higher baseline). However, there was no evidence of a relationship between the degree of participation in shared services and the change in relative administration costs, either for all councils taken together or for upper- and lower-tier councils separately, as demonstrated by the near-horizontal best-fit lines in Figure 1 below. (This finding was robust to the inclusion of demographic control variables, and also to various definitions of the dependent variable based on staff and/or non-staff costs).

Figure 1. Increase or decrease in administration/total costs for shire districts (SD) and other council types for different levels of shared back-office service participation. Figure from Dixon and Elston 2019. 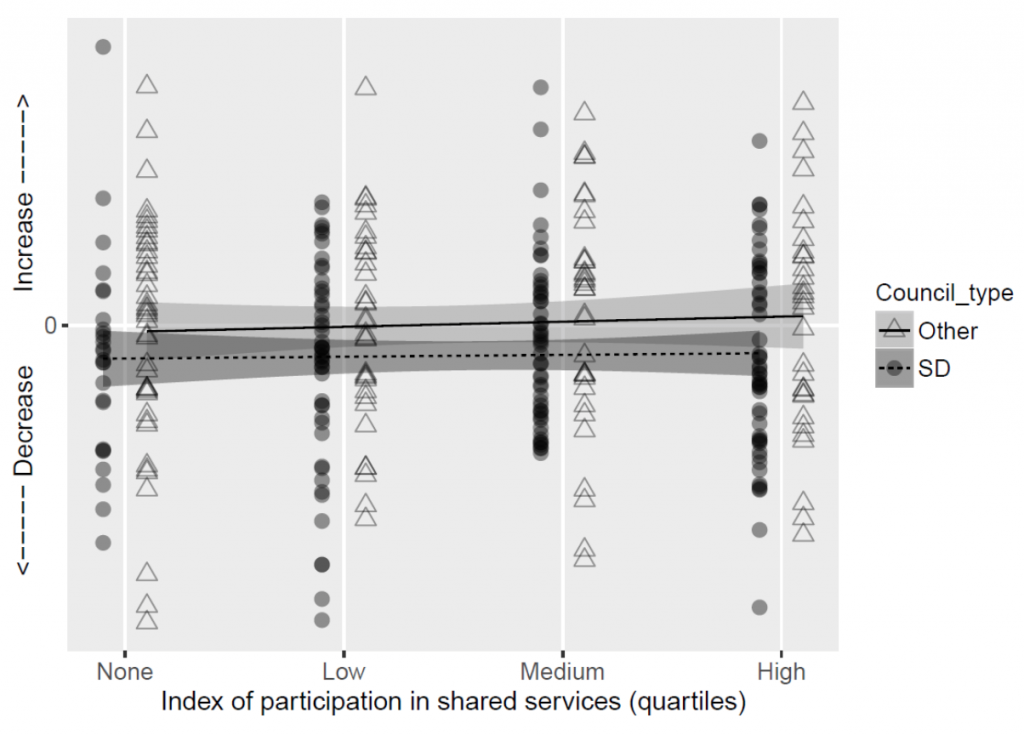 We next tested whether reform outcomes varied by type of administration shared (clerical or professional) and by diversity of frontline activities undertaken by individual councils and across partnerships (“structural complexity”). Contrary to expectations, we found no evidence that lower structural complexity improved reform performance. And sharing of labour-intensive professional (rather than automated clerical) services actually showed a small but significant positive relationship with administrative intensity. This likely reflects the limited potential for scale economies in activities that are not capital-intensive, combined with the costs of coordinating multiple partners.

In a follow-up study, we re-tested our main hypothesis on an analogous field of activity – council tax collection. As shire districts are the only type of council that participated in shared tax services to an appreciable extent (44 councils, equating to 22% of shire districts), the analysis only includes that type of council. Again, we found no significant relationship between participation in sharing arrangements and the change in council tax collection costs per dwelling, as demonstrated by the near-horizontal best-fit line in Figure 2 below.

We also tested for changes in the quality of tax collection services, in terms of council tax collected as a percentage of the maximum collectable amount. If sharing did not improve efficiency, perhaps it improved effectiveness? In 2016, collection rates ranged from 90.7% to 99.5% for all local authorities, and 94.1–99.4% for district councils. There was no significant change from 2009 to 2016 for all councils, or for districts alone. District councils that shared tax services had slightly worse collection rates in 2016 than those that did not: an average of 97.6% for participants versus 98.0% for non-participants, p=0.02, though this is clearly not a material difference. Tax collection rates deteriorated by an average of –0.19 percentage points from 2009 to 2016 for participants and –0.03 percentage points for non-participants, a non-significant difference (p=0.1). 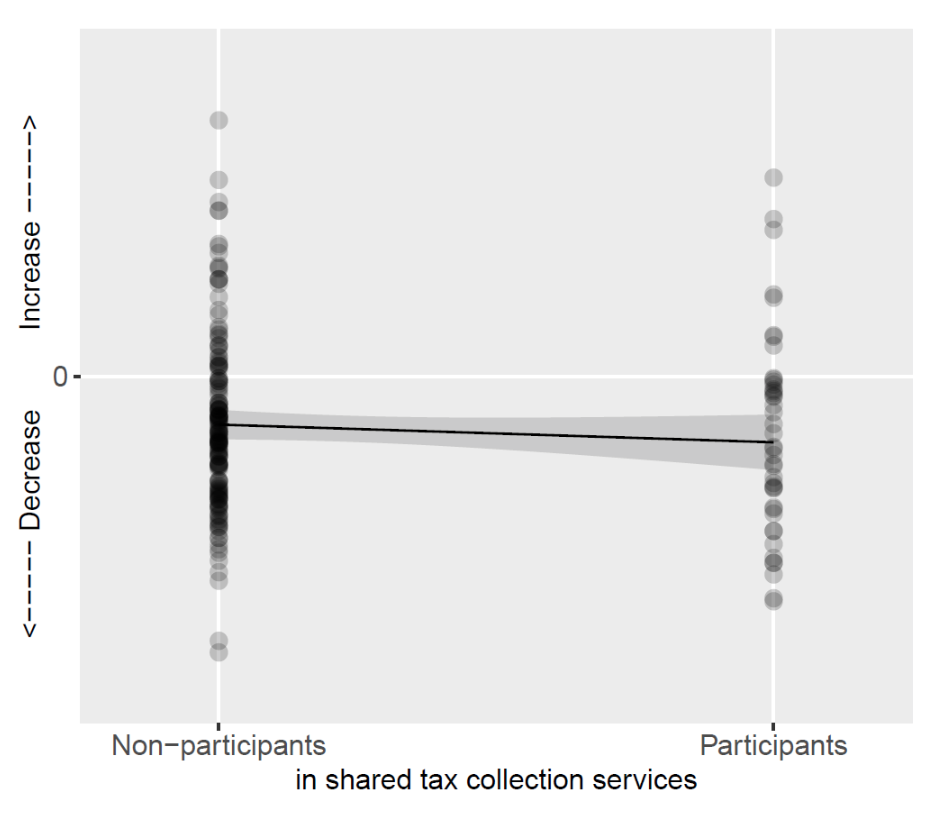 Overall, then, we found no evidence that sharing either administration or tax services has helped councils to cope with the budget cuts brought by austerity. Nor does our research suggest that imposing strict “scope conditions” on sharing arrangements – limiting participation to organizations with high baseline administrative intensity; only forming partnerships of low structural complexity; and only sharing capital-intensive (technology-based) functions – is a promising way forward.

While we do not exclude the possibility that individual sharing arrangements can and have produced efficiencies for their participant councils, great caution is needed by those advocating and implementing this type of reform.

Note: The above draws on the authors’ work published in the Journal of Public Administration Research and Theory and Public Money and Management. The analysis was funded by the British Academy and Leverhulme Trust.