Carsten Jung writes that the Treasury needs to provide a sustainable stimulus to prevent another Great Depression and explains why the UK can afford to borrow big in order to do so. He stresses that central bank support will be critical, but this should be reduced once the economy has recovered, and that Rishi Sunak needs to outline a plan for putting public finances on a firm footing, anchoring the recovery around sustainable pro-jobs investments and fair tax reform.

As a result of the COVID-19 crisis, Rishi Sunak and the Treasury are facing one of the biggest economic challenges in modern history. The years ahead will require rigorous thinking on how to support the economy while keeping public finances stable. After the financial crisis, the answer was austerity – with disastrous consequences for people, the environment, and growth. There is an alternative to this: a recovery that is socially just and avoids economic pitfalls. Here I outline the four pillars of such a sustainable recovery.

Pillar 1: Rishi Sunak should do whatever it takes to prevent the ‘Great Shutdown’ from becoming another ‘Great Depression’

Due to the lockdown and related policies, government debt levels will increase significantly. Depending on how long social distancing measures are in place for, government debt could rise from its pre-crisis level of 80% to above 100% of GDP. But once the immediate crisis is over, the economy will likely be scarred. Businesses may hold back from investing, households could buy fewer products, and many jobs might not return. If this persists, the ‘Great Shutdown’ could end up turning into another Great Depression, with enduring low growth and high unemployment. A depressed economy would be disastrous for society. It would be equally bad for the Treasury – a shrinking economy also means shrinking tax receipts.

Rishi Sunak will need to do whatever it takes to prevent this. He will need to deliver a broad-based stimulus to drive up demand, reduce business uncertainty and support the private sector in generating high quality jobs. This will require further borrowing. But this is the only way to ensure sustainable growth and to put the public finances on a firm footing.

Pillar 2: The Treasury can afford to borrow more because interest rates are very low

The government can afford to increase its debt level, because interest rates are close to zero – the lowest they have ever been. This means that, even with more borrowing, only a limited share of annual tax revenues would need to be spent on servicing the debt each year. This is akin to a person taking out a mortgage – someone can afford a bigger mortgage if interest rates are low at 1% as opposed to when they are high at 5%.

Therefore, as long as borrowing costs remain low, a high level of government debt remains affordable. In fact, interest rates are currently so low that even a doubling of the UK’s debt would still mean the Treasury pays less to service this debt, as a share of tax receipts, than any other time in the 20th century.

Pillar 3: Strong central bank support will have to end once the economy has recovered

The reason for ultra-low borrowing cost is partly because the Bank of England is buying up a lot of government debt. This calms financial markets and allows the government to borrow large sums of money at cheap rates. It is an essential support measure for the government’s COVID-19 response, and it should go on until the economy has recovered.

But the government cannot rely on the central bank buying ever more of its debt, forever. Ultimately, this would undermine the credibility of public finances. An approach that continuously relies on the central bank financing large government deficits could eventually lead to financial bubbles or runaway inflation. Therefore, a sensible strategy for putting the public finances on a firm footing is needed.

Pillar 4: After the crisis, public finances need to be stabilised through sustainable pro-jobs investment and fair taxation

The graph below ranks the key policies able to put public finances on a firm footing, which could kick in once the economy has recovered and sustained growth has returned. This involves stabilising the deficit and the overall financial position of the state. The actual response should involve a mix of some of these policies, focussing on those that reduce inequality while having few unintended side effects. 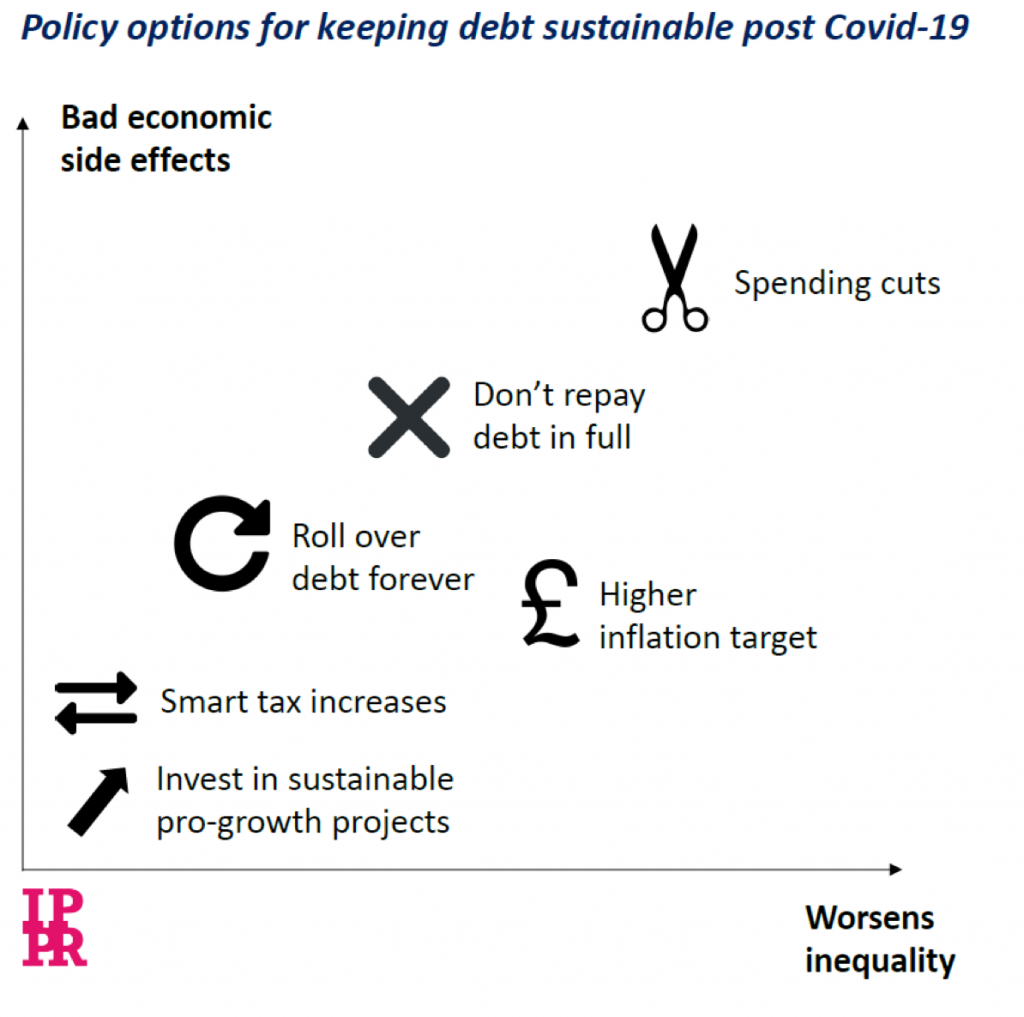 First, spending cuts – known as austerity – can help reduce the budget deficit and decrease the debt level over time. But the last ten years have proven that austerity is bad for the economy and terrible for society.

This contrasts with, secondly, a strategy that focuses on sustainable pro-jobs investments in education, the green transition, health and social infrastructure. Such investments, following an initial stimulus during the crisis, can ensure enduring growth of the economy. Every pound of smart investment can bring in a multiple of that in tax revenues in the future. This means the debt burden is more easily repaid in the future, with a smaller share of tax revenues. Many countries, including the UK, used high growth to chip away at their towering debts after the Second World War. The UK’s debt burden was at 250% of GDP in 1950, but high growth in the subsequent decades meant that, over time, it was brought down without austerity.

Third, debt could be rolled over forever, meaning it would never actually be paid back. With a moderate debt level, this can work. But with a high debt level, it can be a problem. It would mean that the central bank will effectively be forced to make sure borrowing costs remain low, constantly. This is not a great place to be in, because when the economy recovers – and interest rates should be starting to rise – the central bank would be forced to keep rates low regardless. Artificially low rates can be bad for parts of the economy, cause financial bubbles and lead to too high inflation. In the long term, debt levels should be brought to a level that avoids such a catch 22 situation.

Fourth, the government’s debt – including that owed to the central bank – could not be repaid in full. History suggests that defaulting on debt on a small scale can work, but if done at large scale it can cause a protracted financial difficulty for the government.

Fifth, higher inflation (e.g. a target of 3-4%) could mean that the value of debt becomes inflated away over time. For instance, the UK’s war debt burden was reduced in the middle of the 20th century partly through high inflation. Somewhat higher inflation could be considered part of the solution following this crisis. But if too high, it can worsen inequality, because it hits low-income households and small-scale savers the most.

Sixth, smart tax increases are eminently feasible in the UK right now. Overall UK tax rates are low compared to other G7 economies. And there are a range of taxes that could be increased that would not hurt the economy while at the same time addressing huge injustices in the system. For instance, there is no economic reason why income from capital is taxed less than income from labour, which is currently the case and mainly benefits the well-off. And tax reform could redress bad incentives currently in the economy that encourage damaging behaviour – such as pollution and underinvestment – therefore benefitting the economy in the long run. There is thus huge scope in the UK to make tax reform a central part of the post-crisis public finance agenda.

All this means Rishi Sunak need not despair. Ultra-low borrowing costs mean he can afford to borrow whatever it takes to fight this crisis and deliver a broad-based stimulus. The Bank of England’s support will be crucial to support this. But at some point, this will have to end. For the medium term, Mr Sunak needs to outline a plan that puts public finances on a firm footing. With sustainable pro-jobs investments and fair tax reform at the heart of this, the UK can come out of this crisis better and with firm public finances.

Carsten Jung is a Senior Economist at IPPR’s Centre for Economic Justice. 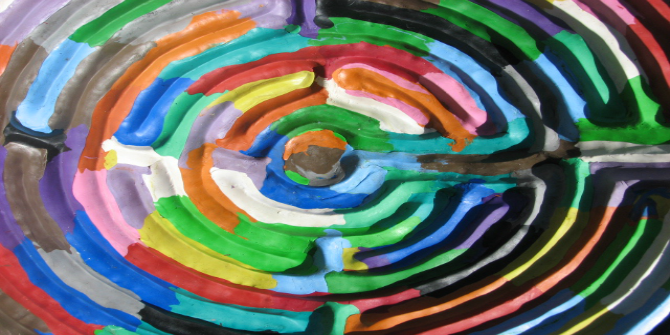