Last May saw an unprecedented victory by the Scottish National Party (SNP in Scotland, and a rout for the Conservatives. While many commentators attribute the Conservative’s decline in Scotland to the harsh economic policies seen in the Thatcher years, the IPPR’s Nick Pearce argues that the decline of Scottish Conservatism began in the 1960s when it failed to adapt to changing social and economic circumstances in Scotland.

The stunning victory of the SNP in May’s Scottish Parliamentary elections might have been expected to trigger extensive public and political debate about the future of the United Kingdom. Thus far, it has not done so. Aside from an interesting speech by Sir John Major at Ditchley earlier in the summer, and latterly some fairly predictable anti-nationalist rhetoric from Scottish Liberal Democrats and English conservative commentators, the SNP earthquake has precipitated very little by way of political discussion about the configuration of the nations of the UK.

Instead, it has been left to Murdo Fraser, a candidate for the leadership of the Scottish Conservatives, to open up the terrain of a new political settlement for the UK, through his call for a new conservative (or reminted Conservative) party in Scotland. This has certainly set the Tory hounds racing, as they mull the implications of a separate Scottish Conservative party for the fortunes of their political clan, north and south of the border. But it has also provided a useful prism through which to think about broader political questions for the union and the fate of its main political forces.

It is indisputable that Scottish Conservatism is a moribund force.  The party fell to an all-time low in the May elections to the Scottish Parliament, down 2.7% on its 2007 constituency performance, roughly  the inverse of its performance in Wales, where it came second in the Assembly for the first time.

Most commentators attribute this decline to the effects of Thatcherism and long Scottish memories of what happened to their country in the 1980s. They conclude that a centrist conservative party, untainted by association with Thatcher, stands the only chance of detoxifying the conservative brand in Scotland and renewing its political fortunes.

Yet the fall in support for the Conservatives in Scotland long predates the effect of Thatcherism. As the Figure One below shows, the Conservatives began to lose vote in share in Scotland in the early 1960s. Part of this fall is accounted for by the wider trend of declining vote shares going to the two main political parties but the drop is more precipitate in Scotland (particularly in the 1960s and 1980s), and there is no steady recovery seen during the New Labour years, as there is in England and Wales.  Therefore to trace the roots of the current crisis in Scottish conservatism to the toxicity of Thatcherism is to paint only half the picture, since most of the loss of popular support for the Conservatives in Scotland had already taken place by the time she came to power in 1979. 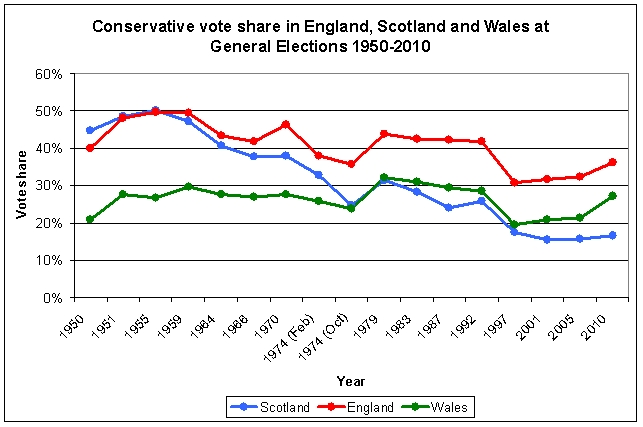 In fact, as the foremost historian of modern Scotland, Tom Devine, argued in his magisterial work The Scottish Nation (1700- 2007) the Conservative Party began to lose support in Scotland when its role as a Protestant party of the Union and Empire waned in the early 1960s. In 1964, it dropped the title Unionist, in favour of the anglicised Conservative. As Devine recounts, it steadily lost the skilled Protestant working class, as Britishness and sectarianism lost their appeal, while its Clydeside industrial class leaders were replaced by anglicised lairds and aristocrats. As the Scottish middle classes abandoned the cities, Labour consolidated its hold on urban Scotland, while retaining the loyalty of the Catholic working class. The SNP then profited from the Conservative decline, while the failure of devolution ambitions in the 1970s set the stage for the experience of Thatcherism and rule from Westminster, as Henry Dundas, the 18th century government overlord, was reincarnated in successive Scottish Office Ministers.

The other fact worthy of note is that Scotland was a Tory-free zone for most of the 19th century, during the years of liberal hegemony. The Conservatives won only seven seats in nine general elections between 1832 and 1868,  returning no MPs at all in the elections of 1857, 1859 and 1865. The Scottish Conservative political tradition only revived as unionists gathered their forces to oppose Irish Home Rule, which was followed by the waning of liberalism in the early 20th century under pressure from the rise of class politics. Conservatism therefore has relatively shallow roots in Scottish soil.

To argue, as Lord Forsyth has done, that Murdo Fraser is  just an appeaser of Scottish nationalism is therefore wide of the mark. Mr Fraser is simply revealing, very starkly (and within the context of an evolving devolution dynamic) the depths of the crisis of Scottish conservatism. Conservatism has failed to invent a new, post-Imperial identity in Scotland. Its English reinvention in the 1980s as a neo-liberal Thatcherite party did not secure consent or support from the Scottish people. Nor did it offer them a new political settlement within the union. It consequently has almost nothing  distinctive to offer in Scottish politics.

In the meantime, however, the SNP has widened its political appeal. It now embraces – much as Tony Blair did in 1997 – a wide spectrum of support from left to right, across the length and breadth of Scotland. Alongside broadly social democratic voters, It picks up support from precisely those sections of the electorate to whom Conservatives would wish to appeal: the business class, private sector employees, small employers and rural interests. To imagine that this is an artefact of Alex Salmond’s political acumen and the pork barrel politics of a bloated public sector, whose challenge can be met and defeated simply by defending the union status quo, is a delusion. Scottish nationalism has modernised as a movement, squeezing out the political space that the Conservative Party and others might have occupied.

The good news for Scottish Conservatives is that both Labour and the Liberal Democrats are suffering their own existential crises in Scotland, albeit ones that have come upon them with the shocking velocity of sudden electoral defeat, rather than gradual decline. Labour has atrophied as a party – intellectually and organisationally – since devolution and that process of decay has now caught up with it, while the Liberal Democrats have been punished for being precisely the kind of political party in Westminster – socially and economically liberal – that a smaller, niche conservative party might have sought to become in Scotland. Mr Fraser’s agenda therefore raises the bar for the reinvention of the political identities of all the main unionist parties in Scotland, not just the Conservatives.

The final intriguing prospect opened up by Mr Fraser’s intervention is whether it will stimulate more debate on the English question – or more specifically whether the logic of separate Scottish political identities will be followed into English party formation.

This article first appeared on Nick’s Blog at the IPPR on 6 September. 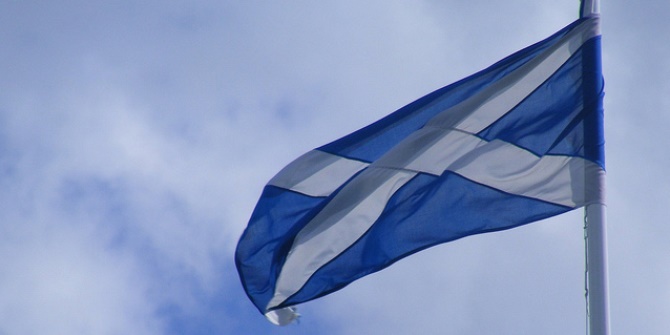