With rising unemployment in the UK, we see further media attacks on disabled people, who are portrayed as ‘scroungers’ who exploit the system of benefits. Debbie Jolly, co-founder of Disabled People Against Cuts (DPAC), argues that the negative portrayal of disabled people in the media and the government’s imposition of cuts reflect the public’s perception that benefit fraud is much higher than reality.

Eight months on there has been a clear escalation of the negative portrayal of disabled people in the UK media. These attacks are no longer confined to screaming newspaper headlines in the Daily Mail and Daily Express declaring that the majority of people on disability benefits are frauds, but a whole host of television programs setting out the Saints and Sinners, even programs with usually good credentials such as Panorama have jumped on to the band wagon of who’s responsible for ‘Broken Britain’. Since March 2011 negative and unbalanced reporting has become worse.

Unemployment has increased to the highest rates ever recorded for youth and women, and according to the Office of National Statistics vacancy rates have decreased from an average of two to one in 2005 to six to one in 2011, meaning six people are chasing each available job. These figures hide local variations, which are often much higher.

Yet unemployment or any need for state support is still consistently identified as a personal failing regardless of individual circumstances or societal limitations. This is the ideological message, rather than economic and statistical facts, that gathers pace and shouts out loud and clear from some sectors of the media, which claim disabled people need to leave welfare and get jobs because they are ‘faking it’.

A recent report commissioned by the organisation Inclusion London and carried out by researchers at the University of Glasgow found significant changes in media reporting of disabled people which show a clearly defined increase in stories and views identifying disabled people as ‘undeserving’. 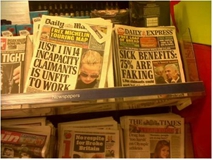 The report identified changes in reporting through comparative content analysis of tabloid newspapers in 2005/6 and 2010/11and through focus groups. The researchers found that incidents of negative language regarding disabled people in print media had more than doubled over the time period, while what they termed ‘sympathetic’ stories had more or less disappeared in the tabloid press. Terms such as ‘burden’, ‘scrounger’, and ‘cheat’ were used repeatedly in 2011 with a rapidly decreasing use of articles on disability discrimination. In addition stories outlining the political and economic context were rare. When the focus groups were asked to describe a typical disability story in the newspapers: disability benefit fraud was the top theme.

The researchers also carried out a number of focus groups asking what each group thought the level of disability benefit fraud was and found variations in responses from 50 to 70 per cent of all claims. In reality, the Office of National Statistics reports incapacity benefit fraud at just 0.03 per cent. The Department of Work and Pensions’ own figures on Disability Living Allowance are 0.05 per cent. The media strategy appears to be working.

A report carried out by BT recently showed that a third of those questioned demonstrated increasingly negative attitudes towards disabled people. Reasons cited for this ranged from disabled people being seen as a burden on society (38 per cent), ill feeling around the perceived extra support given to disabled people (28 per cent), and the personal worries and sensitivities which rise to the fore during a recession (79 per cent).

The impact of further benefit cuts

Sheffield Hallam University have also produced a report outlining the impact of the cuts in incapacity benefit, claiming that almost half of those now receiving incapacity benefits will lose them, not because of fraud, but because of a tightening of the qualifying criteria for the replacement of lower income benefit Employment Support Allowance. It estimates that the reforms will cut the number of disabled people on out-of-work disability benefits by nearly one million in just three years. Combined with other reforms set to take away any support from disabled people and those which have already been implemented, we will see over nine billion pounds worth of support removed. This reveals a very different story from one of fraud. Instead we see a story of cuts and changes in the benefit rules in a way that will make it more difficult for incapacity claimants to work again, particularly those living in disadvantaged communities.

Yet it is the benefit fraud stories that abound despite the 0.03 figure. A rise in disability hate crime has been linked to the media’s  strategy on the demonising of disabled people. One example was reported by in the Observer on 4th December which tells of Peter Greener’s constant barrage of abuse from a neighbour, who claimed he was faking his disabilities to get benefits. There are rising cases of suicide amongst disabled people. One couple entered a suicide pact after surviving for a year by walking 10 miles to receive food parcels which they made last all week.

These are just a few stories, but the climate of fear is clearly working. There are disabled people who are frightened to leave their homes because of verbal and physical abuse, and accusations of being scroungers and frauds. There are those who refuse to claim their entitlement to support in spite of previously paying years of national insurance when they were in work, because they do not want to be labelled as benefit cheats. In total £16 million worth of entitlements goes unclaimed.

There are also those denied entitlement to support through the tougher regimes for claiming any benefit such as the replacement for incapacity benefit through the work capability assessment, carried out by the private company Atos who are being paid £100 million per year by the government. The sums do not add up, but the strategy seems to.

Disabled people say they are fed up with being labelled as scroungers in the media – and are beginning to point the finger in the direction of the Government. Yesterday at Work and Pensions questions I asked the Minister for Disabled People to assure the House, and disabled people up and down the country, that Ministers are not behind the stories knocking disabled people that seem to be emerging with alarming regularity…

McGuire called on the UK minister for disabled people to quell the insidious media attacks, a challenge that was also made directly to Miller at a recent disability conference in London: McGuire said:

The Minister for Disabled People has a responsibility as the champion of disabled people inside government to challenge some of the more outrageous and outlandish comments by some of her senior colleagues and others associated with her government…And I call on her to do so.