Even before the riots of August 2011, many people were concerned that policymakers were too frequently coping with the outcomes of social problems rather than the root causes. Anne Power, a member of the Early Action Task Force, looks at a new report which could offer an alternative vision of how early intervention can strengthen communities and obtain growth at lower cost.

Being a member of the Early Action Task Force is rather like sitting on the deck of the Titanic as it sinks. How do we build a society that prevents problems from occurring rather than one that, as now, copes with the casualties?

This approach is frequently voiced in politicians’ speeches but not embedded in public policy. Whilst government spending has been cut over the last year, the rhetoric of preventative approaches has grown.

Early action is sometimes used as shorthand for services for under-fives. Their needs are very important but forestalling problems is a socially and financially smart thing to do right through life, from cradle to grave. Early action should be a fundamental principle, shaping the way both government and civil society spend their resources and judge their success.

We have looked at what most helps or hinders families on low incomes in poor areas. More activities for children and young people, more supervision of conditions to prevent trouble, and more community spaces so people can meet informally were among the top priorities – all modest and doable, but threatened by ill-thought out cuts across London and the country.

Change the conversation:  The conventional language of prevention presupposes problems, victims and perpetrators. It is pessimistic, reductive and discouraging. The language of ‘readiness’, becoming the best that we can be, identifies assets and builds on strengths. It is optimistic, aspirational and motivating.  We envisage a society that is ‘ready for everything’ characterised by enabling services that equip us to flourish and by prompt interventions that pick up and respond to the first signs of difficulty. 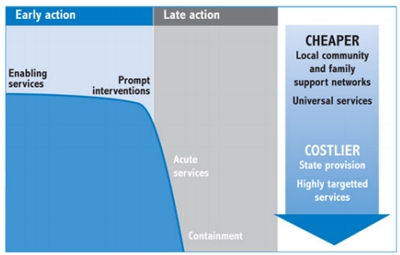 Understand the triple dividend: Thriving lives; costing less, contributing more. Politicians have been talking for years about the economic as well as the social case for earlier action but it is invariably understated. Early action isn’t only cheaper than later action and important for social wellbeing; it helps to reduce the deficit and to increase growth. A population that is ‘ready for everything’ contributes more. Public spending goes down and growth goes up. That’s why this topic may not be new but is so timely now.

Recognise what works:  We have drawn lessons from some of the most successful early action projects in the third sector and from government initiatives. These case studies and more are available online.

Develop the business case: The high level economic case is not the same as the practical business case for specific interventions. Here evidence is patchy and contested. Data collected for different funders has used different processes and indicators undermining the validity of comparisons and conclusions. We propose development of a ‘common core’ in monitoring and evaluation.

Service the bureaucratic plumbing:  Spending rules, organisational and departmental silos and a distorted translation of ministerial intentions are blocking progress.

Encourage alliances and leadership:  Becoming a society that is ready for anything is about more than public service reform and it is also about less. More, because it must engage us all across the sectors. We need powerful alliances and we suggest a process for developing them. Less, because most of the change that we seek is achievable without legislation. We need leadership that will challenge convention. In Scotland, around 40% of local public expenditure is ‘negative’ or dealing with the consequences of problems rather than preventing them from occurring. There are no comparable figures for the UK overall, but also no reason to suppose that they would be very different if there was. The Scottish government’s September 2011 budget included a £500m increase in preventative spending despite a 9.2% reduction in cash from Whitehall. Our aspirations for the whole of the UK are ambitious. Scotland shows what can be done.

Early Action to forestall trouble before it happens has to make sense – it saves money, it prevents escalating disorder; it helps young people grow up as citizens rather than ‘rioters’. The events of August 2011 surely underline this.