Nicola Sturgeon, First Minister of Scotland and leader of the SNP, recently gave a speech at the LSE in which she discussed the need to reform UK political institutions. After the event, she sat down with Tony Travers and Jack Blumenau to discuss the potential influence of SNP MPs in Westminster after the general election and the virtues of minority government.

You’ve referred to the need to modernise the United Kingdom’s constitutional arrangements, which you clearly see as defective. If the SNP had influence over a Westminster government, which parts of the constitution you would like to see modernised first? What are the things that stand out to you that are most in need of change?

Well, some of what I spoke about in my speech, which I suppose is the more practical, day-to-day issues about how decisions are taken, particularly spending decisions. We need to open that up, make it more transparent, and more open to consultation and negotiation. We won’t get everything we want even if we have got big influence but I think we need to look again at the voting system. If first-past-the-post ever had “it’s day”, then that day has been had.

I favour the abolition of the House of Lords. There is absolutely, definitely a need to reform the House of Lords, but I would like to see it go completely. I also favour a written constitution. The UK is one of only very few countries that doesn’t have a formal, written, codified constitution. So, these are the kinds of things that we will argue for, and push for. There is a sense, in England as well as in Scotland, that the procedures and working practices of the House of Commons are part and parcel of what it is that turns people off from politics. It is seen as very exclusive and very difficult to penetrate in any meaningful way.

Any SNP MPs after the general election will be UK MPs, and therefore could influence the future of the governments of England. In the unwritten constitutional arrangements that we have, the future of England has become more prominent, partly because of Scotland, Wales and Northern Ireland’s progress since 1999. I wonder whether SNP influence could imaginably be brought to bear on the future of the arguments for some devolution inside England.

Fundamentally, it is for the people in England to decide whether they want further devolution. I don’t think it would be right for the SNP to dictate to the people in whatever part of England that they should have their own assembly or whatever. But, I do think that, if we can be a part of an opening-up of the whole Westminster system, and a part of a process of decentralisation out of Westminster, then it opens up the possibility to bring issues of English governance and devolution very much to the heart of the agenda. And that’s got to be a good thing.

I’m very conscious of the fact that much of what drives the alienation from Westminster in Scotland will be exactly the same kind of issues that drive the alienation from Westminster in the North of England, or other parts of England, and so I think there is a strong argument for it. I just hesitate from suggesting in any way that it’s up to voters in Scotland whether the North East of England has its own assembly. It’s up to the voters in the North East of England to decide that.

It is often said that England is a very centralised country – and it is – but actually  Scotland is pretty centralised as well, isn’t it? There is devolution to Edinburgh and there’s a Scottish parliament and government, but actually Scottish local government is relatively centralised. Council tax is frozen in Scotland – there is not much local tax freedom. Would you favour a more decentralised position inside Scotland?

I do. I don’t accept the characterisation that Scotland is a very centralised country. But I do think that it’s a very strong case, and we are pursuing a lot of initiatives in this direction. With island communities, for example, there is a very healthy debate just now about the devolution of responsibility and resources to island communities. To city authorities as well, we have active participants in the Glasgow city deal, there’s a big appetite for much more of that.

I also am a great believer in, yes, transferring powers from central government in Edinburgh to local authorities but not stopping there. I think, actually, what we need to see are more powers actually in communities, much more grassroots community empowerment. We’ve got legislation going through the Scottish parliament just now on community empowerment, looking at some of the practical issues that have to be addressed to get communities much more sense of direction over the things that affect their own lives.

The speech that you gave here at the LSE espoused many of the virtues of minority government, particularly in terms of consensual and deliberative decision-making. These are often the same features mentioned in favour of formal coalition governments. You have been very clear about making the distinction between the two, and which you think would be the correct approach in this particular election, but I wondered whether you thought more broadly that minority governments have values to them that formal coalitions do not?

One of the concerns often apparent about a minority government model is about  stability. The experience of the UK over the last 5 years has been of a very stable coalition government. Are you at all concerned that a minority Labour government, in some sort of support agreement with the SNP, would just not be as stable?

No, in the right circumstances. I remember the BBC did a report a few weeks ago where they went to Sweden to look at how minority government works, and I was shouting at the television saying “you could have just come to Scotland to see it at a lot closer quarters than that”! We’ve proved minority government can be stable and effective, and that it can get things done. We were a minority government that got a lot of stuff done. So, it’s like any government – if it’s a bad government it will run into difficulties. If it’s a good government, doing good things, in a responsible, mature way, that is winning public opinion, then minority government is perfectly capable of being stable government.

I always remember that one of the lessons somebody told us in the early days of our minority was “you can have parliament against you, and you can get away with it, as long as you have the people with you.” That’s an important lesson. It’s also the case that minority governments lose [parliamentary] votes. I remember the first vote we ever lost. It was a very significant moment because we lost that vote, we shrugged our shoulders, then got on with it.

I noticed when you were speaking earlier – you’ll know better than anybody that nuance matters in these things – that you explicitly ruled out a coalition with the Conservatives, but does that absolutely and explicitly rule out an SNP block of MPs keeping a confidence-and-supply deal going with a Conservative minority government?

Yes, it rules it out. There will be no confidence-and-supply deal with a minority Tory government. I hope I didn’t sound nuanced, because I’ve been trying very hard not to sound nuanced on this –

You said coalition, that’s why I’m just picking up on this.

The language I usually use, which I thought I had used today is that there will be no formal or informal agreement with the Tories. We would not vote for a Tory Prime Minister in a confidence vote.

You can imagine being in parliament however, and voting on a one-by-one basis with a Conservative minority government?

We wouldn’t vote to put that Tory Prime Minister into office.

If there was a Tory Prime Minister in office would you take legislation on a case-by-case basis or just oppose Tory legislation?

That would depend on the circumstances of that government. but there would be no relationship – formal or informal – between the SNP and the Tories.

The SNP did vote with Mrs. Thatcher in 1979 to bring down the Labour government…

I was 9 years old so not really…

I’m not blaming you personally for that!

I think circumstances are slightly less black and white than that. It’s maybe a bit unusual to be as blunt as we have been about the Tories, but we’re not going to countenance that.

Listen to Nicola Sturgeon’s public lecture at the LSE: 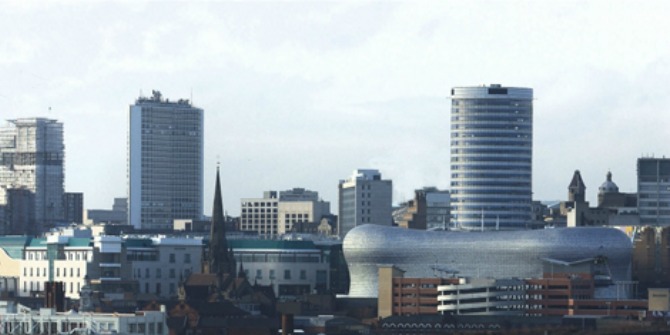