Mária Žuffová discusses the role of freedom of information (FOI) laws in journalism. By surveying journalists, interviewing activists and civil servants, and submitting FOI requests to government ministries she identifies a number of problems with the process. Journalists reported that their requests were often refused on questionable grounds, delayed, or not responded to at all. One of the consequences of this is that journalists might choose to use loopholes in the law in order to be able to publish stories that are in the public interest.

Advocates of freedom of information laws have long argued that legislating the right to access information improves government responsiveness and accountability, not least by enabling journalists to fulfil their watchdog function better. By providing public-interest information generated through independent bureaucratic processes, the argument goes, states allow the press to raise the alarm when public funds are mismanaged, public services are poorly delivered, or citizens’ rights are violated. While both available research and examples of investigative journalism have provided evidence in this direction, we know little about how journalists use FOI laws to obtain information and how they find the process.

In my latest research, focusing on the UK’s Freedom of Information Act (FOIA), I surveyed 164 journalists, interviewed seven activists and civil servants, and submitted requests to 21 ministerial departments in order to assess how the process works in practice. The results are mixed for the FOIA being an effective instrument for government oversight.

Journalists perceive the FOIA as an essential tool for their work. However, over 70% of journalists surveyed submit less than 50 requests per year (Figure 1), which is less than one request per week. Half of them submit less than ten requests a year. These findings are in contrast to some MPs’ and authorities’ claims that journalists misuse FOIA and create an unreasonable administrative burden on authorities. 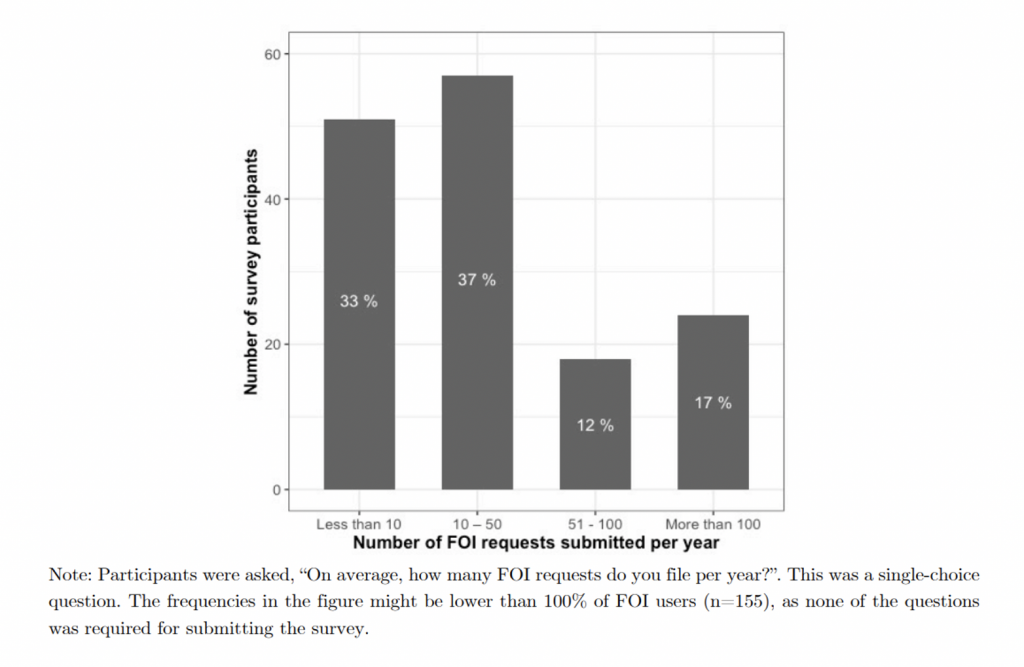 Moreover, while the journalists I surveyed perceived the FOIA to offer many advantages for journalism – namely reliability, accuracy, and exclusivity – they often described the experience as problematic. Four issues stood out: long time limits, administrative silence, wide application of the exemption on cost grounds, and differential treatment.

Journalists argued that the time for complying with requests is too long to suit the fast-paced work of newsrooms. My own experience with submitting FOI requests to ministerial departments was that obtaining the requested information often takes substantially longer than the legally prescribed 20 working days. Nearly half of the departments responded on the very last day of the statutory time limit; others requested clarification, which reset the clock and added extra days to the initial wait. Moreover, if FOI requests are refused, reverting the initial decision through the appeal process can take up to eight months, as reported in a recent openDemocracy report. For the FOIA to become more useful to journalists, time limits may therefore need to be shorter.

From the perspective of time, failure to respond to a request represented another cause for concern, as the person making the request is left in legal limbo. In contrast, in many other jurisdictions, unresponsiveness is deemed as a refusal and enables the requester to follow the standard appeal process. Introducing a similar rule on administrative silence in the UK, as recommended by both openDemocracy and mySociety, would be another right step forward to improving FOI practice.

A high refusal rate also frustrated journalists, particularly the exemption on costs grounds, which they argued was used most frequently to justify withholding the information requested. While public authorities have several legitimate reasons to refuse requests, the statistics on the government’s FOI performance indicates a trend towards opacity, with the refusal rate having almost doubled in the past 15 years. The problem with refusals on costs grounds is that they create information asymmetry in favour of public authorities, as requesters cannot verify whether the justification provided is genuine. Increasing the costs limits stipulated within the FOIA and allowing requesters the option to pay any excess costs in order to have their requests answered, as is common in other jurisdictions, will go some way in addressing this problem.

Lastly, research participants argued that their requests ‘are being treated differently than those of any ordinary member of the public’. One of the interviewees, representing civil society, argued that ‘sensitive requests’ get to senior civil servants in the departmental hierarchy who tend to ‘see threats, not advantages of disclosure’. For these reasons, some journalists turn to publicly available data instead of filing an FOI request as ‘[data] enables to explore a story idea without having to alert authorities to what is being looked at’. These findings are in line with available research from other jurisdictions, which has already documented the problem of differential treatment of FOI requests by journalists in Brazil, Canada and the United States. Moreover, in the UK, the Scottish Information Commissioner also pointed to the issue of sending some journalists’ requests to a high-level decision-making process, which has the effect of further delaying access. He concluded that this practice is wrong and goes against the general FOIA principle of an applicant-blind practice. A 2020 openDemocracy report also suggested that this practice is common on the central government level, where the Clearing House was set up to detect and obfuscate requests that could represent a reputational risk.

Perhaps even more worryingly, The Times data journalist George Greenwood recently offered evidence that journalists’ requests are treated differently. In response to his subject access request to the Cabinet Office, he learnt that the FOI and Clearing House teams held information on him. References to him as ‘ever-active’ and his requests ‘as sensitive’ suggest that journalists are being targeted and their requests treated differently. This can be mitigated by anonymising all requests immediately after their receipt and before the first point of contact redistributes them further within the authority.

If we agree that the public needs accurate information to make the best possible decisions, and it is one of the most important goals of journalism to provide the public with such information, then the government should make access to information for journalists as efficient as possible.

Note: The above draws on the author’s research published in the International Journal of Press/Politics, and which was funded by a University of Strathclyde GPP/IPPI PhD Studentship.

Mária Žuffová is a Postdoctoral Researcher at the European University Institute.

Photo by Bank Phrom on Unsplash.