‘Yes’ and ‘No’ Tories are separated in part by an assessment of whether the political possibilities for the centre-right within the British state are still attractive, writes Alan Convery. Scottish Conservatives who see the their party’s political viability as weak were it to remain as part of the UK might opt for more radical options. With independence there is the prospect of a shake-up of a party system dominated by two parties (broadly) of the centre-left.

At first glance it might seem odd that a former Conservative MSP has announced that he will be voting for independence in 2014. Scottish independence is for the most part seen through a centre-left lens. The SNP’s white paper, for instance, emphasises the possibility of creating a welfare state that is fundamentally different from England and the rest of the UK. However, it would be wrong to view independence as a project that is entirely without appeal to those on the centre-right of Scottish politics.

1. Our Scottish Conservative member reflects firstly on the prospects for the party at Holyrood elections. She calculates that under devolution there will never be another government of Scotland that involves the Conservative Party. Unlike in Wales, there seems no prospect of the Conservative Party going into coalition with any of the other parties in the Scottish Parliament. Thus on the big domestic policy issues facing Scotland (education, health, social justice), it is unlikely in the immediate future that Conservative ideas will ever have any influence. If you are in politics because you want to represent your constituents and occasionally influence a minority government’s policies, then this may not be a problem. If you are in politics because you want to be in power, the present arrangements are deeply unsatisfactory. If our Conservative member cannot see how this situation will improve, then she might be tempted to opt for more radical change. Her other option is simply to join the SNP.

2. Relatedly, our Conservative member may have formed the view that winning a Conservative majority at the 2015 UK general election will be a hollow victory without significant gains in Scotland. She is tired of arguments about legitimacy and what she sees as the Scottish Government’s tendency to blame Westminster for problems. Increasingly, she finds that the UK without a truly statewide Conservative Party is difficult to defend. A gain of three Conservative seats in Scotland in 2015 would be considered a triumph for the party; our member begins to consider whether it is worth the effort.

3. Having reflected on the prospects for the Conservatives, our member now turns to the best way to see centre-right policies in Scotland. She thinks that the best way to reduce the size of the Scottish state in the long term is to make it responsible for the taxes it spends. She can see no better way of imposing fiscal discipline and an incentive to think about productivity in public services. The buck would once and for all stop in Edinburgh. She calculates that the UK government will not devolve the extent of powers necessary to have a sensible debate in Scotland about the proper role of the state and the market. After independence, the link between money raised in Scotland and money spent in Scotland would no longer be blurred. At a stroke, politicians could only raise spending if they taxed, borrowed or grew the economy. As a Conservative, this is ground on which she feels comfortable debating.

4. Finally, our Conservative member speculates about the party system in an independent Scotland. The centre-right might stand the chance of breaking free from the past and reinventing itself. In particular, removing the centre-periphery cleavage from Scottish politics might encourage members of other parties (particularly the SNP) to consider joining a new party of the centre-right because their main goal has been achieved. In any event, our Conservative member concludes that, politically, things can hardly get any worse in Scotland for people who hold her ideological views. With independence there is at least the prospect of a shake-up of a party system dominated by two parties (broadly) of the centre-left.

‘Yes’ and ‘No’ Tories are separated in part by an assessment of whether the political possibilities for the centre-right within the British state are still attractive. What price will you pay for power at the statewide level? A UK Conservative majority with only a modest increase in MPs from Scotland places the Scottish Conservatives once again in an awkward position. Faced with steady decline or (perhaps) steady recovery, it is not irrational for a Conservative to consider more radical options.

Alan Convery is a Lecturer in Politics in the School of Social and Political Science at the University of Edinburgh. 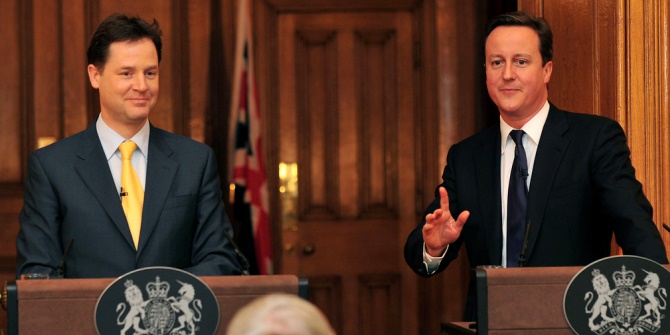