The Game of Zones: Conservation area designations appear to be influenced by homeowner economic interests

The Game of Zones: Conservation area designations appear to be influenced by homeowner economic interests

New research by Sevrin Waights and colleagues at SERC asks whether homeowner can game the conservation area designation process to their advantage. Examining the link between designation and gentrification, they find that designations appear to adhere to homeowner economic interests, implying that they can influence the process.

Conservation areas seem like an uncontroversial policy. They protect the visual appearance of historic neighbourhoods – for example, by preventing your neighbours installing modern ‘improvements’ such as PVC windows. But this protection comes at a cost: you can no longer renovate your less-than watertight roof, add that conservatory you always wanted, or chop down the tree in your garden that is blocking your light. These costs and benefits are considered by would-be buyers and will therefore capitalise into your house price.

So the obvious question is: if you were a homeowner, would you want to be designated or not? This leads to a further question: can homeowners game the designation process to their advantage? These are the questions I try and answer in new research for SERC, working with my colleagues Gabriel Ahlfeldt, Kristoffer Moeller and Nicolai Wendland.

Let’s imagine a scenario where conservation areas (CAs) are designated by an all-powerful ‘social planner’, who acts according to homeowner interests. Heritage-rich neighbourhoods would get CA status because the benefits of preservation will outweigh the costs of the restrictions. In turn, CA designation should increase house prices in those neighbourhoods.

If designation status was solely determined by heritage, the planner would quickly run out of neighbourhoods to designate. But as we can see, new CAs have been designated in every year since the policy’s introduction in 1967:

Figure 1: Percentage of all CAs designated in each year 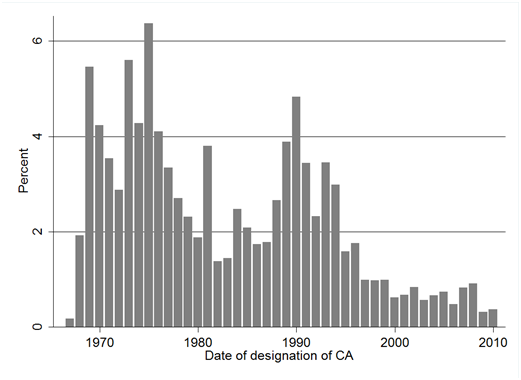 So what’s driving the newer designations? Neighbourhoods’ ‘heritage’ is fairly fixed, but the value placed on heritage can change a lot with neighbourhood composition. Areas that are gentrifying, for example, typically have rising shares of higher-income homeowners with degrees. These incomers have substantial buying power, and are both willing and able to pay more for ‘heritage’ – especially if it is secured by conservation area status.

Since gentrification increases the potential returns to CA status we should see designation continue even as the stock of ‘historic’ neighbourhoods is used up. In these newer CAs, ‘heritage’ status becomes more subjective.

In our paper we test these predictions. First, we examine the link between gentrification and designation, using data on conservation areas provided by English Heritage and on neighbourhood composition from the UK Census (1991 and 2011). We find that a 1% increase in the degree share is associated with an 11% increase in the designated land share – a strong effect. Second, we test our house price predictions by examining over 1 million property transactions. As predicted, we find a zero price effect immediately on CA designation, followed by subsequent house price growth.

This tells us that designations appear to adhere to homeowner economic interests, implying that they can influence the process. How might this happen in practice? Local politicians like doing popular things, and CA designation is certainly popular with homeowners, who tend to turn out in force in local elections. In the UK, public engagement is also actively encouraged when neighbourhoods are nominated as potential conservation areas. Since homeowners are typically better able to form special interest pressure groups this may work to their advantage. All this supports the ‘homevoter’ hypothesis that homeowners have a strong influence over the political decisions that affect house prices. When you play the game of zones, then, you win if you own.

This article was originally published on the SERC blog.

Sevrin Waights is a PhD candidate in Economic Geography at the LSE.

Ed the leader, a leak at the MoD, and Labour edges ahead in the polls: round up of political blogs for 25th September to 1st October

The VAT bombshell is dropped, party mergers are mooted and there is advice aplenty for our political leaders as we head into the new year – political blog round up for 1 – 7 January 2011