Green does government spending, Browne does tuition fees and an axe for quangos? Round up of political blogs for 8-15 October

Green does government spending, Browne does tuition fees and an axe for quangos? Round up of political blogs for 8-15 October

UK Polling Report tracks voting intentions over the course of the conference season, showing the continued lead by the Conservatives of 4 points.

David Herdson at Political Betting comments on Ed Miliband’s dismantling of Brown’s political machine. In his interview with the Observer, shadow home secretary Alan Johnson discusses his strong opposition to the coalition’s plans to withdraw child benefit from families with a higher rate taxpayer, whilst Laura Woodhouse at The F Word discusses child benefit, single parent families and the concept of fairness.

Mark Pack discusses the ever-visible fault lines across the Conservative and Liberal Democrat parties, as Vince Cable made clear his position on graduate tax, notifying all Coalition party members that he no longer supports such an “unfair” system which would “do nothing to reduce the deficit over the next five years”.

Fraser Nelson at The Spectator blog comments on the “British Economic Dysfunction”, or the way in which an expanding economy draws people in from overseas rather than reducing the numbers of workers

Working Class Tory has some constitutional ideas. Mike Smithson at politicalbetting.com wonders why little tactical voting occurred at the 2005 election, while Tim Montgomerie at ConservativeHome has five reasons to be cheerful about the Tories chances of re-election in 2015.

John Redwood looks at the possibility of another round of quantitative easing, as Tim Worstall previews the Green report into government spending. Jim Pickard at the FT’s Westminster Blog looks at the review in further detail. Wat Tyler at Burning our Money calls it ‘short and punchy’.

Jon Snow at Snow Blog looks at the history of equal wages and the current gender pay gap. Ben Fox at Left Foot Forward is surprised that the banks have the begging bowl out to government again to ask for finds to loan to small businesses.

PaulinLancs at Though Cowards Flinch looks at historic debt repayment rates and finds that we shouldn’t be too worried at the current situation. Declan Gaffney at Left Foot Forward examines worklessness, and Michael Meacher at Left Futures blogs on fairness.

Jeff at Better Nation examines how well the coalition has performed on its pre-election promises, and Andy Westwood at Labour Uncut is in favour of elected mayors.

Liam Rhodes at One Nation Tory looks at the disagreement between the Liberal Democrats and the Conservatives over plans to increase tuition fees and scrap the planned graduate tax. Nick Robinson has more thoughts, including on the awkward name of the new proposed policy.

George Eaton at The Staggers says that the Liberal Democrats credibility is on the line over the row on fees. Nigel Stanley at the TUC’s Touchstone Blog has some more reflections on cuts to child benefits, and Peter Challis guest blogging at Left Foot Forward blogs on the unfairness of housing benefit changes.

Sunder Katwala of Next Left is highly critical of Guido Fawkes over recent blogs about Labour MP Sadiq Khan.

Anton Howes at the Adam Smith Institute’s blog is in favour of free schools, and wants profit-making schools included in the scheme.

Jim Killock at Liberal Conspiracy is concerned that Consumer Focus is to be abolished in the coming round of quango cuts. Jeff at Better Nation looks at whether Scotland has the capacity to deal with the coming heavy cuts.

Tim Montgomerie at ConservativeHome examines David Cameron’s vulnerability on prison policy, while Guido Fawkes has some advice for Alan Johnson who faces George Osborne at the dispatch box for the first time today.

Conor Ryan at Conor’s Commentary discusses Lord Browne’s report on university funding, out today, while Shamik Das at Left Foot Forward says that it could take students 30 years to repay their debts under the new proposals.

Iain Dale has reservations about higher tuition fees as proposed by the Browne report. James at Better Nation is against higher fees and the graduate tax. Nick Robinson has some advice for Vince Cable to make the system more progressive than Browne proposes.

Redpesto guest blogging at Liberal Conspiracy muses on whether Ed Miliband will drop New Labour’s policy on variable tuition fees. Will Straw at Left Foot Forward says that the proposals will mean higher earners will pay less for their education in the long run.

Mark Pack blogs on the current state of child detention in immigration cases.

Mike Smithson at politicalbetting.com wonders if Labour is being punished in the polls for choosing Ed Miliband as leader, and Iain Dale previews Miliband’s first stint at PMQs today. Hopi Sen looks at how Labour can be a ‘good opposition’.

Later, Tim Montgomerie at ConservativeHome calls Ed Miliband’s performance at PMQs today a ‘victory’, with his criticisms of the governments plans for child benefits. Jim Pickard at the FT’s Westminster Blog agrees that Miliband won on points.

Richard Exell at the Touchstone Blog looks at the uprating of benefits, as Sunny Hundal at Liberal Conspiracy examines their true cost. Liam Thompson at Left Foot Forward examines the battle for the ‘squeezed middle’.

Matthew Pitt at Left Foot Forward says that Browne has got his numbers wrong.

Chris Dillow at Stumbling and Mumbling investigates the weakening labour market, while George Eaton at The Staggers says that the coalition cannot bank on the private sector to lead the recovery, with 500,000 jobs expected to be lost due to the coalition’s cuts.

Tim Montgomerie at ConservativeHome blogs on how the coalition is changing the Liberal Democrats. Charles Crawford at blogoir looks at William Hague’s relationship with Moscow. Iain Dale examines Margaret Thatcher’s presaging of the ‘Big Society’.

The quango cull is keeping everyone busy from Left Foot Forward, The Staggers and the Westminster Blog, to The Coffee House, and Guido.

ResPublica argues that commissioning must change in order to realise the Big Society’s vision, and Keynesian Liberal takes a dim view of the Coalition’s economic policy. Iain Dale takes a look at how much we pay for local government. Michael White suggests that police reform holds big risks for the coalition. Jon Snow wonders whether we are witnessing a revolution in British Politics.

Nick Robinson has bad news on tuition fees, and The Coffee House looks at cuts in pension relief.

Charlie Beckett at Polis asks whether there is now a new language for a new political generation.

Political Betting wonders whether voters are becoming more enthusiastic for AV the more they learn about it.

Mark Pack salutes the pupil premium after a tough week for the Liberal Democrats on education, although The Staggers outlines the challenges that still lie ahead. 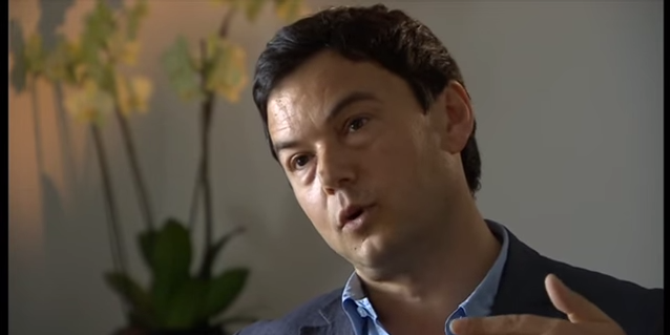 Piketty does London, legal aid cuts cause the government damage, and Miliband proposes ‘rent control’: UK blog round up 26 April – 2 May