In Heroes or Villains? The Blair Government Reconsidered, Jon Davis and John Rentoul seek to counter the negative prevailing view of Tony Blair and the New Labour government, focusing on key areas of criticism. This is a fascinating study packed with first-hand accounts and primary sources, writes Robert Ledger, and is a vital addition to the literature on the Blair government and the wider New Labour project. 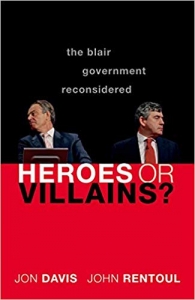 The legacy of the Tony Blair government continues to be the topic of some debate, as shown by the former Prime Minister’s recent defence of his record following a sustained attack from the Jeremy Corbyn-supporting wing of the Labour Party. This makes Jon Davis and John Rentoul’s new book on the Blair era, Heroes or Villains? The Blair Government Reconsidered, all the more pertinent. The authors believe that the ‘prevailing view of Blair and New Labour is too negative’ and that this book should ‘provide a counterweight, so that the independent-minded reader is better placed to reach a considered view’ (312).

Heroes or Villains? takes an innovative approach to its subject, having developed out of a number of university courses taught by Davis and Rentoul at Queen Mary, University of London, and King’s College London. One of the strengths of the book is that many of the key protagonists—including Blair himself—spoke to the classes and provide at times fascinating detail.

The book focuses on several key themes, mostly ones that have been the target of criticism: ‘spin’; the politicisation of the civil service; ‘sofa’ government and Blair’s alleged presidential approach to the office of the Prime Minister; Blair’s relationship with Gordon Brown; the role of the Treasury; and the decision to invade Iraq in 2003. The book makes the case that the Blair government had a particular focus on policy delivery. As such, the number of operational elements that were negatively portrayed during the period should be viewed in this light.

New Labour was characterised as running such a ‘spin’ operation, led by practitioners of some of the darker arts of politics, that it neutralised a civil service resistant to change by appointing special advisors and granting unusual powers to the likes of Alastair Campbell and Jonathan Powell, with Blair making decisions in small cabals outside of the cabinet. Heroes or Villains? does a good job of contextualising these issues.

In retrospect, Blair’s methods neither look as much of a departure from what went before or as worthy of the criticism they received during the actual period. In fact, several of the senior civil servants interviewed in the book appear to look back fondly on the Blair years as a time of change and energy, harking back to ‘just how good things had been under Blair’ (170). It should also be acknowledged, however, that governing looks decidedly different when—as Blair did—the Prime Minister’s party commands a huge majority in parliament. With government and parliament increasingly deadlocked in the contemporary era, the Blair government appears unusually effective in implementing decisions and making policy.

The relationship between Blair and Brown provided journalists with endless pages of copy. The protagonists interviewed and cited in the book appear to broadly converge on two phases of the relationship: a first period of creative tension, and a second period of counterproductive mistrust. Nevertheless, what also seems clear from Heroes or Villains?—also outlined in Brown’s memoirs—was that for most of the New Labour agenda, particularly viewed in the longer sweep of Labour history, there was little difference between Prime Minister and Chancellor. Having said that, Ed Balls, whose contributions are one of the book’s highlights, believes the pair ‘didn’t do enough to hold it together’ (252).

Indeed, Heroes or Villains? is not solely focused on Blair. A chapter is devoted to the Treasury under Brown and Balls, including key policies such as the granting of independence to the Bank of England immediately upon taking office in 1997. A number of things stand out: for instance, the technocratic approach of Brown and Balls, and how much of New Labour’s economic policy had been worked out in detail during the years in opposition, in preparation for government.

New Labour’s economic record is a bone of contention for the Blair government’s critics, who point to a lack of progress on narrowing the inequality that had mushroomed during the Margaret Thatcher and John Major years. Davis and Rentoul provide a caveated defence of New Labour’s economic policy: for instance, the fact that average real incomes in the UK grew by 17 per cent from 1997 to 2010, higher than many of Britain’s peers including Germany and the United States (303).

Overall, the legacy of Blair’s time as Prime Minister has been appraised unusually negatively, in several respects worsening in the years since he left office. Recent events have intensified two areas of criticism: Brexit and the ascent of Corbyn as Labour Party leader. Amongst the piles of material written during the post-mortem of the 2016 Brexit referendum, the Blair government has received a significant portion of blame over its decision to allow immediate free movement of workers as part of the 2004 European Union expansion, which incorporated most of the post-socialist countries of Central and Eastern Europe. Corbyn’s economic critique, deriding New Labour as reheated Thatcherism, or as an example of that supreme (but imprecise) political insult, ‘neoliberal’, also proved highly persuasive. Blair himself has been open to debate the significance of the former, but defensive regarding the latter.

Many readers’ views towards the Blair government, however, will already be tipped in one direction depending on their view of the greatest controversy of the era: the decision to invade Iraq in 2003. Davis and Rentoul contextualise the invasion against the febrile backdrop of those post-9/11 years, as well as the previous stance of the international community towards Iraq and its weapons programmes. Although Blair had overseen a number of effective foreign policy interventions, such as in Kosovo and Sierra Leone, it may be too much for many readers to agree with the sentiment that ‘Iraq [should not] be allowed to eclipse all of Blair’s foreign policy’ (302). Nevertheless, and as the authors describe, it was—and is—very easy to get drawn into the details of weapons inspections, the legal basis for the war, what Blair promised Bush and when, ‘dodgy dossiers’ and so on. On Iraq, as Davis and Rentoul aptly point out, none of this could camouflage that the decision to invade Iraq in 2003 was ‘flawed’ (277), and as a political decision, the Iraq War ‘votes broke New Labour and were the beginning of the end for Blair’ (295).

Heroes or Villains? is a vital addition to the literature on the Blair government and New Labour. It will be of interest to the lay reader, as well as students, and is a far more sober account than most of the existing titles, many of which denounce Blair as an aberrant Labour leader. It is easy to forget how New Labour was once a feared and respected political operation, not to mention that in the 1990s the project was seen by many as modern, progressive and even exciting. The focus of the book means that not every theme is examined in depth (unlikely given that Blair was in power for ten years): for instance, the Northern Ireland peace process, devolution and policies towards the EU. Nevertheless, Heroes or Villains? is a fascinating study, packed with first-hand accounts and primary sources, and one, as the authors posit, that the fair-minded reader will find particularly rewarding.

Robert Ledger has a PhD in political science from Queen Mary University of London and currently teaches at Schiller University Heidelberg and the Frankfurt School of Finance & Management. He is also a visiting researcher in the History Seminar at Goethe University Frankfurt and the author of Neoliberal Thought and Thatcherism: ‘A Transition From Here to There?’