Ahead of the launch of the TUC’s new report , ‘Can Housing Work For Workers?’, James Gregory of the Fabian Society finds that home ownership and economic ‘independence’ do not necessarily go hand in hand. In many cases, economic immobility is a problem shared by working home owners and those in the socially rented sector.

In 2007, with the publication of John Hills’ report into the future of social housing in England and Wales, policy-makers and politicians finally came to the realisation that they could no longer ignore the relationship between housing and employment policy. In response to Hill’s clear analysis of the prevalence of worklessness in social housing, politicians, think-tanks and policy makers rushed to suggest ways in which we could and should ‘join up’ our policy interventions.

There have been some successes, notably the housing association led drive to offer employment services to their tenants. And few in the policy world could not now be aware of the perils of building concentrated social housing in isolation from key services and viable labour markets.

Yet the belated realisation of the interaction of housing and employment was only ever partial. Crucially, both private renters and owner-occupiers have been excluded from this new policy consensus (though the labour market impact of recent benefit reforms on the private rental sector could be profound, forcing households into cheap accommodation in areas with high rates of unemployment). Why is this? The short answer is that a majority of the policy elite are still beguiled by the British ideology of ownership and ‘independence’. This means that owners are free from the need for state support, and are free to exercise choice about where they live and work.

But – as I argue in a new TUC Touchstone report- both of these assumptions are based on myth. Many owner-occupiers are far from being independent, or if they are they suffer for the privilege. And for many households owner-occupation can hinder movement within the labour market.

Let us deal with the independence myth first. The following chart shows the number of working age adults living in poverty in 2008/09. 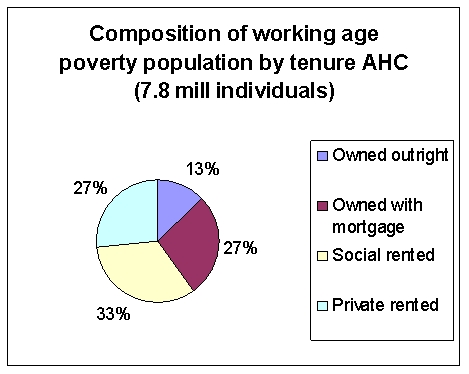 As I write in the report:

When we extrapolate the total numbers from these proportions, what we find is that after housing costs there are a total of 3.1 million working-age individuals in owner-occupied housing that are experiencing poverty. Of these, 2.1 million (27 per cent of the total number of working-age individuals in poverty) live in an owner-occupied and mortgaged home (see table below). These are serious numbers, directly comparable with the 2.6 million working-age social tenants living in poverty.

There is something about the nature of our labour markets that can make the owners that are active in the labour market vulnerable. By this I do not mean simply that the loss of a job is a key trigger for poverty (of course it is). More subtly, we are seeing more and more workers on ‘flexible’ contracts with flexible hours, placing great pressure on their ability to meet housing costs in a sustainable and predictable way.

This should force us to confront a major political and policy question: why have we spent the past 20 years actively pursuing ‘flexible’ labour market policies whilst, simultaneously, seeking to push more and more households into homeownership?

The answer to this question lies at least in part in our second myth, that owner-occupation is a vehicle of social and labour market mobility.

Part of this myth rests on a view of the potentially transformative effect of assets and property. Homeownership is often thought – perhaps most famously by Margaret Thatcher – to positively nurture individual independence. Many on the left – notably advocates of ‘asset-based welfare- have also bought into this vision over the last ten years. Asset-ownership, it is thought, gives us confidence and makes us less risk-averse and better able to take risks with our careers. In other words, it’s not just that we don’t need to worry about homeowners because they are independent; we can increase the number of ‘independent’ households (and individuals) by encouraging more people into ownership.

Yet there is actually very little robust evidence to support this argument. Where there have been attempts to establish ownership as an independent variable in the assessment of individual wellbeing the results have been weak. Typically the households under the microscope were owners because of the type of attribute that some expect ownership to foster; greater confidence, higher incomes, better educations – all these tend to be the variables that lead to ownership, rather than being produced by it.

And to the extent that there is evidence in support of the transformative potential of assets, it has actually been based on relatively small amounts of wealth (as little as £300 in savings or a £5k inheritance). There is very little reason to extrapolate the same conclusions when we are considering the effect of the large amount of wealth invested in a home. Indeed, it strikes me as something of a leap of faith to think that just because a small nest-egg creates the confidence to take a risk (setting up a business or taking time out for training) the same can be said when one’s home is at risk. After all, the order of risk here – what we stand to lose – is dramatically different.

Much of the evidence with regard to ownership suggests that the opposite is actually true: high transaction costs and psychological attachment can make owner-occupiers more risk averse and less economically mobile. This is borne out by our TUC polling, which found that one in six mortgagees (16 per cent) have turned down a job because of the pressure to keep up with their housing costs. A further 1/8 said that they had turned a job opportunity because of the ‘hassle’ of moving.

This brings us back full circle to the 2007 Hills report. One of the problems it highlighted here was the immobility of tenants in the social sector, unable to move to look for or take better job opportunities. For many, homeownership has a similar impact. This matters for the economy as a whole, as we risk a repeat of the slow labour market recovery of the early 1990s, when greater negative equity compounded the inherent immobility of many owner-occupiers. At the time we also saw a very real manifestation of the way in which housing booms can create a broader economic bubble, with a sometimes illusory sense of housing wealth underpinning a consumer driven economy. As we may well see again, a

loss of confidence in the housing market can hit this kind of economy hard, along with the employment prospects of many in the labour market.

So housing matters for workers and their prospects in life, and it matters just as much for many owners as it does for renters.

There are a range of conclusions we could take away from this. Three stand out. Firstly, we should be far more circumspect about the desirability of pushing more and more households into owner-occupation. Secondly, we need a more sophisticated range of policy responses for home-owners, offering similar advisory services (for example on debt and training opportunities) that are often available to social tenants. Crucially, this advice needs to be available long before the crisis points of unemployment or repossession. Our TUC report offers a range of proposed responses to these first two challenges.  Finally, we need to stop telling ourselves that there is a clear hierarchy of tenures, with ownership at the apex and social housing at the bottom.

This article previews the TUC’s Touchstone Seminar launching the new publication, ‘Can Housing Work For Workers?’ on 13 July 2011. Click here for more details and to register.

As long as the UK is bound by the ECHR, it is hard to envisage how a new UK Bill of Rights could ‘solve’ the perceived problems of the Human Rights Act