Lee Crawfurd and Ukasha Ramli measure the responsiveness of elected local representatives to requests from putative constituents from minority religious groups. They find that response rates are six to seven percentage points lower to stereotypically Muslim or Jewish names, with Labour and Conservative councillors both showing equal bias towards the two. Their results suggest that the bias may be implicit and that it is lower in more dense and diverse locations.

In October 2020, the UK’s human rights watchdog found Labour to be ‘responsible for unlawful acts of harassment and discrimination’. Last year, the Muslim Council of Britain called for an enquiry into Islamophobia in the Conservative Party. Other critics have accused the latter of failing to tackle Islamophobia. The 2017 British Social Attitudes Survey showed that 33% of those who identify with the Conservative Party would describe themselves as somewhat racist, compared with 18% of those who identify with the Labour Party.

We set out to gather some evidence on the extent of bias by local politicians against their constituents, using a correspondence experiment. We sent ten thousand emails to councillors with a quick question, and randomised whether they came from a stereotypically Christian name (Harry or Sarah White), Jewish name (Levi or Shoshana Goldstein), or Muslim name (Mohammad or Zara Hussain). We kept the email short in order to minimise the burden placed on our busy objects of study.

Response rates were six to seven percentage points lower to the Muslim and Jewish names – a clear evidence of bias. We don’t however see more bias against Jewish names by Labour councillors. Neither do we see more bias against Muslim names by Conservative councillors. Such discrimination in the provision of services based on race or religion is against UK law.  This form of discrimination by councillors may have substantive impacts for constituents. For example councillors set policy on access to the limited supply of social housing, policies which have been documented to disadvantage ethnic minorities. 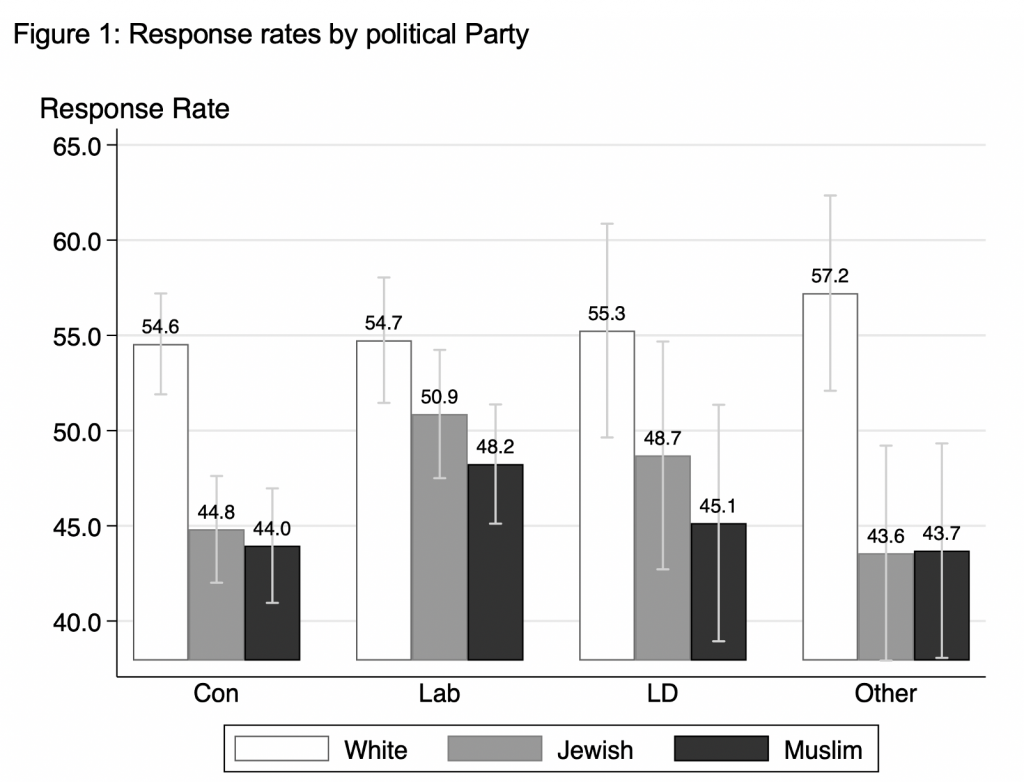 In total we received 5,093 responses to 9,994 queries sent, for a 51% response rate. This is almost identical to the response rate found by a survey of real requests to councillors, in which 51% received a response within two weeks. Amongst those who responded to our queries, the median time to response was 12 hours, and the median length of responses was 228 words.

We randomise each councillor to receive one of two email scripts. The first email script makes a simple request in line with basic councillor responsibilities – ‘I have a question about local services and was wondering if you could tell me when your surgery is held?’. The second request explicitly indicates the religion of the emailer – ‘I’m  interested in organising a sponsored  walk in the local area to raise money for [Christian Aid/Islamic Relief/Global Jewish Relief]. Could you advise me if I need to get some kind of permit?’.

The two email scripts can be seen as different levels of intensity of the treatment. The response rate for white names to the first email was 61%, and 45% to the second email. Bias in response rates is similar across the two types of emails. This suggests that the discrimination occurs based on the name of the sender alone. Due to the high volume and low cognitive effort of checking emails, by not replying, councillors may be acting unconsciously when exposed to non-Christian/minority group names. Alternatively, councillors may simply be consciously discriminating against minority constituents, irrespective of their degree of self-identity. Because the identity of the sender is present in the email address itself, councillors might choose to not even open the emails from names associated with minority groups.

What explains the bias?

Bias in response rates is largest against Jewish and Muslim names in the least densely populated rural locations, with small non-white populations (Figure 2). One reason for this could be that councillors in white areas are more likely to be white themselves. On average we see much lower bias by councillors with names estimated to be Jewish or Muslim (though these estimates are imprecise due to the small number of such councillors). There may also be other differences in the selection of candidates with different levels of unobserved racial and religious bias in rural and urban areas. Alternatively, councillors may respond to political incentives and be less likely to respond to minorities in locations where minority groups are a small proportion of the electorate.

We test responses to electoral incentives directly by showing the relationship between response rates and two measures of competition – the margin of victory at the last election and the number of days until the next election. We see now less bias in close elections. Finally, lower bias could be attributed to the degree of ‘contact’ councillors have with different minority groups. Councillors in more diverse urban locations may show less discrimination through an erosion of prejudice as described by the contact hypothesis, though we are unable to test this hypothesis directly. 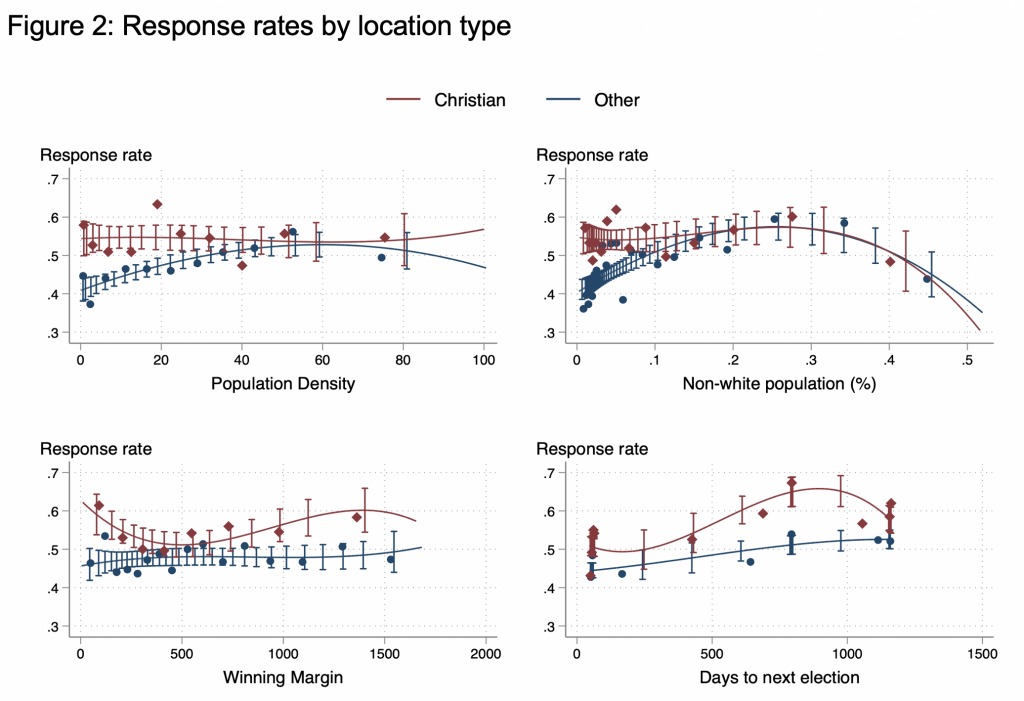 Note: The top-left figure shows a binned scatterplot of response rates against population density, by whether the sender name was Christian or non-Christian. The top-right figure shows response rates against the non-white population share. The bottom-left shows the response rate against the winning margin of the elected councillor at the last election. The bottom-right shows the response rate by the number of days until the next election. Fitted lines are polynomial regressions of order three, with bars showing 95 percent confidence intervals. Population density and non-white population shares are calculated at the ward (sub-council) level from 2011 census data. On average there are three councillors in each ward. Population density is expressed as residents per hectare.

We find evidence for bias from local politicians in response to requests for basic information from ‘Jewish’ or ‘Muslim’ constituents. Despite the media narrative of anti-Semitism in the Labour party and Islamophobia in the Conservative party, our results suggest that both parties are equally discriminatory to both minority groups. This discrimination seems to occur based on names alone, and is unchanged by the explicit identification of religious identity. These effects are largest in rural areas (with low population density) and with small non-white populations. Councillors in such areas may have fewer opportunities for positive interactions with minority groups.

This work demonstrates that even access to basic services are susceptible to forms of discrimination, and that minority group members may struggle to be heard through this process. Reducing councilor bias could be attempted through training designed to reduce implicit prejudice. The leader of the Labour Party has announced the party’s commitment to undergoing this type of training, though more research is needed into the effectiveness of such training. Future studies may benefit from further investigating the process through which politicians engage with their community, and identify ways in which to reduce these biases.

Lee Crawfurd is a Senior Research Associate at the Center for Global Development.

Ukasha Ramli is a PhD student at the LSE Department of Psychological and Behavioural Science.