How to reverse the civic empowerment gap of young people? Teach them about politics in school

How to reverse the civic empowerment gap of young people? Teach them about politics in school

The problem of low turnout among young people, particularly those from less affluent backgrounds, has been subject of many discussions. Anja Neundorf and Kaat Smets write that this gap in civic empowerment often develops at a young age due to varying degrees of parental political socialisation, and draw on recent research to emphasise that civic education in schools is key to engaging future generations of voters into becoming active citizens.

How can we increase the engagement of young people in politics? Commentators in politics, media and academia have tried to understand why today’s youth seems more and more detached from public life and what can be done to get them back in. In a recent study we present a simple and one might say obvious answer: we need to teach young people about society and politics in school.

Turning away from politics

But before explaining how school can help to empower young people to become engaged citizens, let us first look at the problem again. The frightening decline of turnout among young people in Britain has been subject of many discussions. Only 4 out of 10 18-24 year olds made it to the ballot box in the last four general UK elections. In the last 20 years, the turnout gap between young and older voters has doubled from about 10 to 20 percentage points. Besides appearing not to be very eager to participate in elections, young people seem to be disillusioned with conventional politics more generally. Alienation, cynicism and disenchantment areoften-cited explanations for the lack of interest in electoral politics among young people. Young people, so the argument goes, do not feel that politicians take an interest in them, rarely feel acknowledged as experts on topics that influence their lives and regard the contemporary political style as slow, formal, distant and uninspiring.

The frightening decline of turnout among young people in Britain has been subject of many discussions. But turnout does not only differ between age groups. Political power is distributed in vastly unequal ways among citizens.

Meira Levinson has coined the idea that not everyone is the equal when it comes to politics the “civic empowerment gap”. The source of this civic empowerment gap is economic. Or as Larry Bartels puts it: “political influence seems to be limited entirely to affluent and middle-class people”.

Older people are often set in their ways and it is difficult to increase their political engagement. In order to close the civic empowerment gap, the key is therefore to engage future generations of voters into becoming active citizens. But how do we do this?

It has long been known that family plays an important role in socialising children into politics (or not). Some parents deliberately teach their children about politics. Children also often imitate their parents’ socio-political values and voting behaviour. The socioeconomic environment in which children grow up plays an important role too. In homes full of books, children often learn more about the world, which better equips them to have an active part in it.

There is no doubt that children from political families get a head start when it comes to their own political interest and activism. But what about children who do not have the advantage to learn about politics at home, as their parents are not interested in politics themselves? This is where school, and in particular civic education, comes into play.

Increasingly, civic education is also considered an important influence on knowledge and political orientations of young people. A less settled question is how family and school interact. In particular, can civic education compensate for the “civic empowerment gap” between young people from privileged backgrounds and those from impoverished backgrounds? Or, to the contrary, does classroom instruction widen the gap by primarily benefiting those who begin civics classes with a high degree of pre-existing political knowledge and awareness?

A new study on the importance of civic education

In a new study we consider the compensation question with respect to political engagement of young people as they grow older. For this we use data that followed about 3,000 Belgian school children between the ages 14 and 23. From the data we know about their family environment, for example how often they discuss politics with their parents, and the socio-economic background of their parents. We also know about their school environment and the type of civic education they received. These data allow us to test whether civic education (and if so what type) can compensate for missing parental political socialisation.

Regarding the type of civic education, we found that the most important school variables are the amount of formal civic education and the inclusion of group projects. Classroom climate – i.e. whether children felt encouraged to develop their own opinions, express their own opinions, and felt that their teacher presented different points of view – did not play a role. Formal civic education, which we focus on below, typically includes the working of formal institutions (e.g. parliament, the EU or the UN). Often children would also discuss current affairs and elections. This is very similar to the content of civics courses in other countries such as the UK.

The figure below illustrates our findings with respect to the civic empowerment gap. Here we plot the political engagement for four different types of young people. The black lines plot the political engagement for children from privileged families that prepare them to be active citizens. The red lines are for children from homes where politics does not play a role. These would be the groups that we expected to be disadvantaged. As we see, it is indeed the case that at the age of 14, children from apolitical family backgrounds (red lines) are much less politically engaged.

Our research confirms that civic education can be key to the development and maintenance of a democratic system in which all citizens have the knowledge, skills, and attitudes to understand and influence their government. In order to reduce the civic empowerment gap, everyone should be part of an enlightened citizenry. To the extent that differences exist, schools play a crucial role in creating and maintaining civic equality. After all, as a society there is not much we can do about the way parents influence their children at home. However, we do have the power to design school education in a way to empower those that are disadvantaged by their family background.

Note: this piece originally appeared on The Conversation.

Anja Neundorf is an Assistant Professor in Politics at the School of Politics and International Relations at the University of Nottingham.

Kaat Smets is a Senior Lecturer in the Department of Politics and International Relations at Royal Holloway, University of London. 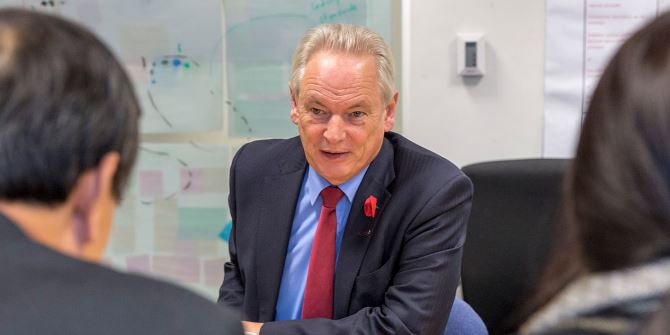