In new research, Dora-Olivia Vicol and William Allen examine how the media reported on Bulgarians and Romanians in the run-up to transitional controls being lifted. A textual analysis revealed that the nouns identified as explicitly ‘Romanian’ tended to centre around criminality and economic poverty, and this was especially the case in tabloids.

On 1 January 2014, transitional controls placed on Bulgarians and Romanians wishing to work in the UK were lifted. From 1 December 2012 to 1 December 2013, arguably a crucial time in the run-up to this important change, UK national newspapers discussed the potential magnitude, impacts, and composition of migrants from these countries. In a new report published by The Migration Observatory, we explored what kind of language was used around mentions of these countries as well as people identified as Bulgarian or Romanian over these twelve months. We were particularly interested in identifying what issues were raised alongside mentions of both groups when they appeared together, but also in comparing the language used in connection with mentions of either group when they appeared separately.

Using Nexis, a service that archives many periodicals including newspapers, we searched for any items mentioning Bulgaria, Romania, Bulgarian(s), or Romanian(s) that had appeared in ten of the UK’s most popular national tabloids and broadsheets, as well as their Sunday editions (a full list of papers and categorisation appears at the end of this post). We intentionally searched across all sections of newspapers, rather than concentrating on ‘news’ or ‘international’ sections, because readers are likely to encounter stories mentioning these countries in a variety of locations—such as the sports or arts sections. We also consciously avoided including the month immediately prior to 1 January 2014: since we were interested in explaining how the press had generally talked about these groups, inclusion of this particularly intense period may have unintentionally skewed the results.

The final dataset included 4,441 items totalling over 2.8 million words. Using corpus linguistic methods and the Sketch Engine, a web-based tool employed by lexicographers to study how words are used in context, we looked for words that were most frequently and significantly linked to mentions of Romanians and Bulgarians together, as well as separately. The findings are expressed in ‘raw’ frequencies, representing simple counts of the number of times a word was used, and in frequencies ‘normalised’ per 1,000 items, which accounts for the difference in length between tabloid and broadsheet articles. This means that one mention of ‘Romanian migrant’ in a tabloid article, for example, counts as the same as a (potentially) longer broadsheet article. (Fuller discussion of the methodology is contained in Appendix 2 of the report.)

Over the twelve months, tabloids published more items mentioning the key terms than broadsheets except for July, September, and October. There was an increase from December 2012 to February 2013—the single month with the most items published, largely driven by the horsemeat scandal which was linked to Romanian abattoirs—followed by a decrease in both publication types.

Figure 1: Frequency of items in the corpus over time 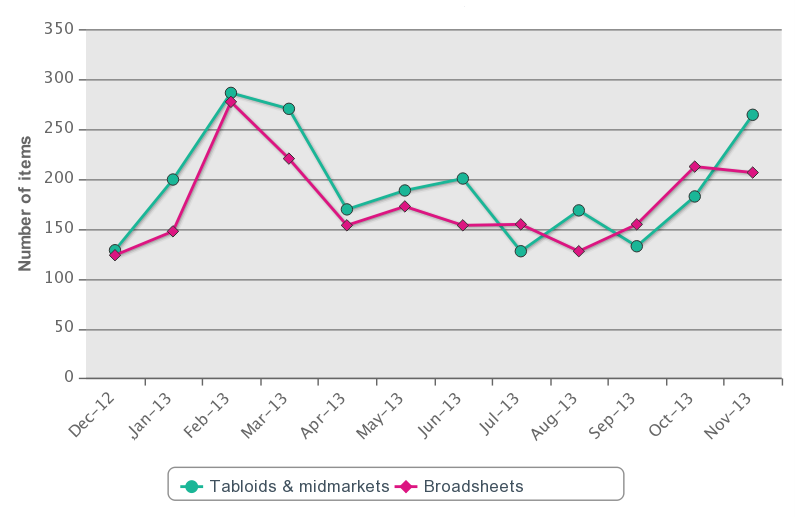 Since the dataset was collected with no particular topic in mind, other than references to Bulgaria and Romania, we first wanted to know what people, places, or things were regularly described as Bulgarian and/or Romanian—or, in grammatical terms, when ‘Bulgarian’ and ‘Romanian’ were used as adjectives, what nouns regularly appeared with them. The results show that both tabloids and broadsheets were referring to migration issues when they mentioned these two groups together, as in ‘Bulgarian and Romanian migrants’.

Table 1: Nouns described by the adjectives ‘Romanian and Bulgarian’ by publication type

Meanwhile, looking at verbs associated with ‘Bulgarian’ and ‘Romanian’ when they are used as nouns tells us what actions the press reported the two groups as doing. In this case, one set of words focused on inward movement, as illustrated by verbs like come, arrive, and work.

Broadsheets and tabloids also used a range of numeric language (million, thousands) and specific figures alongside mentions of these groups when they appeared together. The 50,000 figure was particularly associated with a report published by MigrationWatch UK, although the results below also show how a wide range of other figures were circulated. This finding was particularly interesting given the absence of official data.

Table 3: Numerals and specific figures associated with mentions of Bulgarians and Romanians

However, when we turned attention to how the press portrayed each group separately, we found a striking difference: the nouns identified as explicitly ‘Romanian’ tended to centre around criminality (words like gang, criminal, thief) and economic poverty (squatter, beggar). This was especially apparent in the tabloids compared to the broadsheets, as seen below.

This was distinctly absent from the nouns described as ‘Bulgarian’, where references to football and a particular case of blonde Bulgarian Roma child who sparked an ‘abduction’ investigation in Greece were more predominant.

Crucially for the study of British politics, this research documents the language which the UK national press—itself a heterogeneous space in which migration debates continue to occur—has actually used in its coverage of these migrant groups at a critical time for migration policy and governance. Furthermore, not only does it contribute a new set of evidence for properly understanding how the press has portrayed different migrant groups, but it also illustrates the exciting possibilities for further large-scale analysis of other political texts.

Note: This article gives the views of the authors, and not the position of the British Politics and Policy blog, nor of the London School of Economics. Please read our comments policy before posting. Featured image credit: David Holt CC BY-SA 2.0

Dora-Olivia Vicol is a DPhil student at the School of Anthropology and Museum Ethnography (SAME) at the University of Oxford.

William Allen is a Research Officer at The Migration Observatory and the Centre on Migration, Policy, and Society (COMPAS) at the University of Oxford. He tweets from @williamlallen and his website can be seen at https://oxford.academia.edu/williamallen 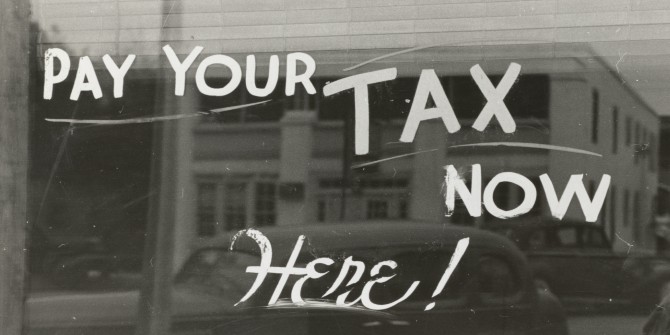