Northern Ireland has its own distinctive party system, formed mainly in the proportional representation elections that have been in place there for decades now. However, the Westminster elections always raise new issues for Northern Ireland, and never more so than when these 18 MPs’ votes could be crucial in a hung Parliament. Paul Mitchell of the LSE Government Department looks at the possible results for seats across Northern Ireland, and the role the winning MPs might play.

On Thursday 5 May, the Daily Telegraph led with a front-page headline ‘Ulster Pact could Seal Victory for Cameron’.  Yet one of the ironies is that the Conservatives have gotten into bed with the wrong unionist party (the old Ulster Unionist party – UUP) and may now need to switch to an alliance with their arch rivals the Democratic Unionist Party (led for decades by the Rev. Ian Paisley, and now led by Peter Robinson).

One can only assume that Conservative Central Office knows very, very little about electoral politics in Northern Ireland.  How else can we explain the very strange decision of the Conservatives to enter a formal electoral alliance with the UUP, especially since the once dominant party in Northern Ireland had been almost extinguished at the 2005 general election. The UUP held onto only one MP in 2005 (having had 10 in 1997), and even she (Lady Sylvia Hermon) resigned from the UUP in the run-up to the current election precisely because of the UUP’s alliance with the Conservatives!

In trying to forecast the 2010 results I have looked at past election results, analysis of boundary changes, an opinion poll, and where the result is ‘too close to call’ my ‘expert judgement’ (i.e. my best guess!). On this evidence, the UUP (now calling themselves the Ulster Conservative and Unionist New Force – UCUNF) are predicted to get no Westminster seats at all. Their only outside chance of a seat is in South Antrim where they are fielding their party leader, Sir Reg Empey who is in a tight contest with the incumbent William McRea of the DUP.  According to a constituency poll conducted by Inform Communications (and published in the Belfast Telegraph yesterday) McCrea is 6 per cent ahead of Empey.

The table below lists predictions for each of the Northern Ireland seats. Thirteen of the 18 are entirely safe for the incumbent party – Gerry Adams (for example) is predicted to get 64 per cent of the votes in West Belfast. South Belfast has been a marginal in recent years with a very tight unionist/nationalist balance. Alasdair McDonnell captured  it in 2005 – he is likely to hold it, but only because Sinn Fein withdrew their candidate during this campaign to prevent the seat going to the DUP.  Sinn Fein were trying to force the SDLP to reciprocally withdraw their candidate in Fermanagh and South Tyrone (FST), something that the SDLP have refused to do.

The fight in Fermanagh is intense and genuinely ‘too close to call’. In 2001 and 2005 the seat was won by Michele Gildernew of Sinn Fein. In 2010 in a return to the tactics of earlier times, both the main unionist parties withdrew their candidates and are campaigning for an ‘agreed unionist’ independent candidate, Rodney Connor.  According to a constituency poll in the constituency, Gildernew is on 44 per cent to Connor’s 43 per cent.  My view is that Sinn Fein may now hold this seat – due to further squeezing of the only other candidate with sizeable support, McKinney of the SDLP, whose support is down to 10 per cent.

Locally in Northern Ireland, a lot of attention is focusing on North Antrim – where the Paisley clan look likely to pull off a dynastic succession. The Reverend Ian Paisley’s whopping 18,000 majority in 2005 will be sliced and diced, mainly by a strong threat from the leader of an anti-Belfast Agreement Party (a DUP break-away party called the Traditional Unionist Voice – TUV). It is bitter and downright nasty fight here (as internal feuds leading to party splits always are), but Ian Paisley Jnr looks likely to hold the family seat. The constituency poll gives Paisley 39 per cent over Allister of the TUV who is on 31 per cent.

Overall then, my predictions are:

The table at the end of this article shows the expected results across all constituencies.

Does this mean anything for the outcome at Westminster? As always Sinn Fein will not be voting at Westminster, so they will only have an indirect effect.  Most accounts say that the majority winning threshold for Cameron or Brown is 326 MPs, but really the 5 Sinn Fein seats should be subtracted, because we know in advance that they will be abstentionist.  Thus only 645 MPs are likely to take their seats leaving 323 as the real majority ‘winning post’.

The other 13 voting MPs are in principle available for legislative alliances.  The SDLP are more likely to favour Labour, as is the independent Sylvia Hermon.  Thus the 9 DUP MPs are the main opportunity for the Conservatives (and Cameron was in Belfast Yesterday)– and the DUP are drawing up their shopping lists.  Thus the DUP is praying (possibly literally!) for a ‘hung parliament’ in which neither of the ‘old two’ parties are willing to do a deal with Nick Clegg. That is the promised land . . .  For Cameron, it may mean that with 318 seats he has a working majority. 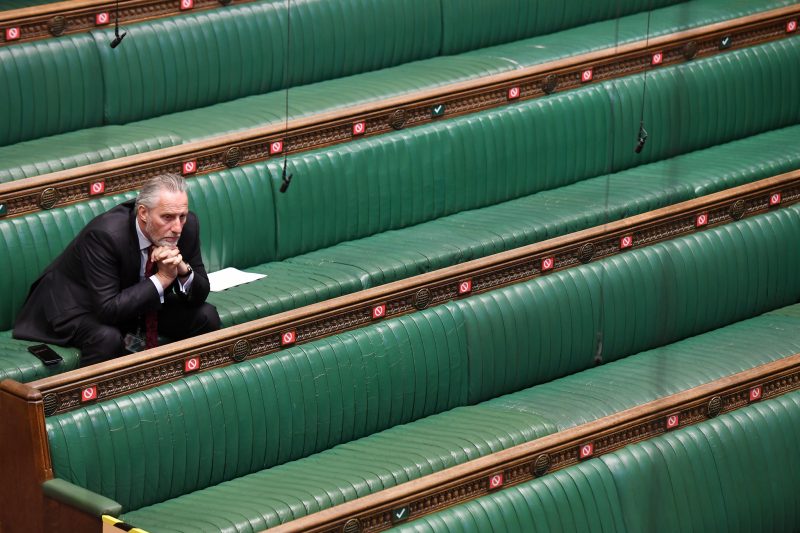