A report released by Shearer West and colleagues confounds popular notions regarding the usefulness of a humanities degree. The report established a significant increase in the number of Oxford University humanities graduates who went into growth sectors of the economy —namely management, media, financial services and law—during the period of study. As this study was always intended to be a pilot, she hopes that others will produce comparable studies that examine different universities, other subject areas and variant time frames.

The current state of humanities in higher education has attracted a great deal of attention since the 2007 financial crisis. The media has tended to promote a narrative of the humanities in crisis or decline, often using apocalyptic adjectives, while a false dichotomy between humanities and the sciences is established on the basis of the ostensible uselessness of one and the significance to the economy of the other. Academics in the humanities have often been our own worst enemies in this debate – appropriating the same doom-laden language, being defensive about our position or claiming an entitlement that relies solely on a rhetoric of intrinsic value.

More helpful are reports, such as those produced by Harvard (for example, ‘The Harvard Humanities Project’) and the UK Arts and Humanities Research Council (see here and here), that seek to use empirical evidence rather than rhetoric to expose the real contribution humanities in higher education makes to the economy and society, as well as to the betterment of individual lives.  Whatever our personal beliefs in the intrinsic value of our subjects of study, it is important that we recognise our responsibility to demonstrate why we should continue to be the beneficiaries of public funding in a time of economic constraint.

It was a desire to augment the evidence base that led the Humanities Division at Oxford University to commission Philip Kreager and a small team of researchers to produce the report, ‘Humanities Graduates and the British Economy: the Hidden Impact’. Using Oxford’s excellent alumni database, the research team tracked the lifelong careers of 11,000 humanities graduates who matriculated (began their degrees) between 1960 and 1989. This sample represents roughly 1/3 of the students who studied humanities subjects such as history, philosophy, classics and modern languages during that period. The period itself was chosen because it was a time of dramatic change and growth in the British economy, and we were interested in seeing how humanities graduates developed their careers in such a transformational period. The study is in two parts—the first of which is a statistical analysis and the second a more in depth qualitative study, based on interviews, of a sample of those graduates.

Figure 1: Occupational destinations of all graduates, 1960-89. Percentages and (raw numbers). 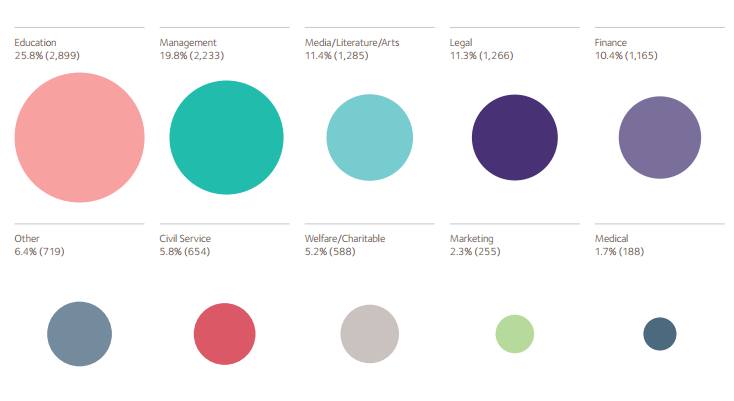 Source: ‘Humanities Graduates and the British Economy: the Hidden Impact’

There are a number of observations one can make on the basis of this report. First, the methodology used (a longitudinal study and a statistically significant sample) provides us with a different kind of evidence to the first destination surveys that tend to be the best information we have on graduate careers. There are real limitations to first destination returns, as they do not give a full picture of the way people develop their careers throughout their lives or how they use the skills and capabilities they have gained through their educational experience in the workplace. For example, our study showed that only 33% of graduates in the sample remained in the same sector over their lifetime.

This study was always intended to be a pilot, using data we had available at Oxford. We hope that others will produce comparable studies that examine different universities, other subject areas and variant time frames. International comparative data would also be very useful, and the publication of the report has begun to unearth comparable studies elsewhere, such as that of the ARC Centre of Excellence in Creative Industries and Innovation at Queensland University of Technology.

For those of us humanities academics who have worked in higher education for many years, the study provided empirical evidence for something that we knew instinctively—that is that a humanities degree in a top university equips students for a variety of careers.  Certainly there is no question that there are skills gaps in some science areas that are rightly worrying employers and leading to an understandable public policy focus on STEM.  Nevertheless, a degree in a humanities subject cultivates critical thinking, problem solving, initiative, curiosity, innovation, analysis of detailed and complex information and outstanding oral and written communication skills, as well as a deep understanding of language, culture and the human condition. Employers have reinforced that they need graduates with these abilities as well as the more specialist and technical skills that characterise many science degrees (for example, see here and here). The graduates who participated in the interviews had no difficulty articulating the way their education prepared them for their diverse and challenging jobs.

Finally, I would hope the report will inspire pupils with the confidence to choose a degree that suits them best—whatever that happens to be. With the advent of £9k fees, I think there is a growing perception (and anxiety) among pupils at school that pursuing some kind of vocational training at university (whether it is in business, law, medicine etc) is the only way to have a successful and profitable career. It is important that we both recognise and demonstrate the real value of a good humanities degree to a wide range of career prospects.

Professor Shearer West is Head of the Humanities Division at the University of Oxford. She was formerly Professor of Art History at the University of Birmingham and was seconded from 2008-11 to be Director of Research at the Arts and Humanities Research Council (AHRC), part of Research Councils UK. She has published nine authored and edited books on eighteenth, nineteenth and twentieth century European art, and many peer-reviewed essays and articles, including prize-winning publications. Her specialist area is the history of portraiture.