The Conservatives could lose 100 parliamentary seats if they ignore the rot in their vote share that is spreading across Northern cities and boroughs writes Lewis Baston. Another strong vote for UKIP could also gift Labour some vital Midlands seats.

The pattern of votes cast in recent local elections suggests that the northern and southern electorates are continuing to polarise. The Conservatives’ results in the 2012 local elections in many big cities and northern suburbs were very bad indeed.

In several metropolitan boroughs the Conservatives polled a lower share of the vote in 2012 than they did even in 1995, when John Major’s government was hit by its worst set of local government losses at the hands of recently designated ‘New Labour’. It may not be surprising that the Conservative vote has decayed since 1995 in several northern core cities: Liverpool, Manchester, Sheffield and Newcastle, but their vote was also lower this year in Birmingham, Sefton, Knowsley, Sandwell, Tameside, Bradford and Wolverhampton than it was at their 1995 nadir. This is a total of 11 out of the 36 boroughs.In a couple of boroughs, Conservative groups have fallen apart under the strain of central government policies towards local government, particularly the huge cuts in government grants to poorer authorities. In Sandwell, the deputy leader of the Conservative group Elaine Costigan defected to Labour in September 2010 over the impact of government cuts to the Building Schools for the Future (BSF) programme and the particularly severe impact (and apparent government incompetence) with which they affected Sandwell. Costigan’s father Bill Archer, who had been a Conservative councillor for 36 years, also supported Labour in the 2011 elections. Two Liberal Democrat councillors in the borough also defected to Labour. In the light of all this, it is perhaps not surprising that Labour managed a clean sweep of the borough’s wards in 2012 and fell only one short in 2011.

In Sefton the Conservative collapse is if anything more dramatic. Another seemingly permanent fixture of Conservative local government, Les Byrom (leader of the council group from 1991 to 2005) defected to Labour in 2008 and five councillors left the group in 2011 over a variety of local issues, including another long-serving leader Ron Watson. The Tories crashed to their worst-ever result in the borough elections in 2012, with Labour taking control of this suburban borough for the first time ever. There seems an inexorable pro-Labour swing in nearly all of the urban North West; the municipal Tory vote in Wirral, which does not carry over into general elections, increasingly appears a doomed relic. Only Trafford and Stockport of the metropolitan boroughs have held out against the tide in Greater Manchester. In Manchester and Liverpool Labour’s numbers of councillors are unprecedented, and much of the remaining opposition looks like being wiped out at the next elections in 2014.

The Conservatives cannot afford to ignore the rot that is spreading from the core cities into the other metropolitan boroughs, because they will account for over 100 parliamentary seats even under new boundaries. The Tories are uncompetitive in the vast bulk of these already. Under the Boundary Commission’s proposals there would have been 17 metropolitan Tory seats in 2010, but only eight would have been Conservative on the basis of the 2012 elections (one of them, Halesowen & Stourbridge, by a single vote). They would not have won any targets from the Lib Dems (the Lib Dems were doing better than in 2011 in seats such as Cheadle, Hazel Grove and Southport), and lagged behind – often embarrassingly far behind – seats they would need to be winning from Labour to reach a parliamentary majority. But there is no immediate solution available to their decay in the cities and the north; regional economic trends and government policy seem likely to aggravate the problem for the Conservatives and urban Lib Dems in the north. The results in Scotland were similarly dire for the Conservatives, with Labour and the SNP making inroads into their remaining strongholds. Without making any progress in Scotland and the metropolitan areas, they need to do extremely well in the rest of England.

Labour’s performance in southern and non-metropolitan marginals was usually much better in 2012 than it was in 2011 and 2010, although only in a few places such as Ipswich did the party seem to be nailing down a convincing lead in votes cast. The Conservatives need to recover some ground to hold on to the marginal seats they won in 2010 or 2005, but the task even now looks achievable – a 1 per cent swing back will be enough for Harlow, Basildon and Reading East, for instance, and they should be helped by boundary changes in Harlow and Crawley. Even in London, the pro-Labour swing in the London Assembly would not be enough to win many parliamentary constituencies.

A strongly regionalised swing, favouring Labour in the north and the Conservatives in the south, has interesting consequences, particularly when combined with the Liberal Democrats’ resilience in many of their stronger constituencies and the success of the SNP in Scotland. A swing to Labour will take out a few Tory remnants in the north, a swing to Tory will conquer Labour’s remaining outposts there – but these swings may well not be enough to win a Commons majority if there are 30 Lib Dems, 16 Northern Ireland MPs and perhaps 15-20 Nationalists.

But what, then, of the Midlands? The West Midlands used to be a rather unpredictable and strange region in general elections, particularly the industrial sprawl of the Black Country west of Birmingham and some of the city’s seats. The Black Country boroughs of Sandwell, Walsall and Dudley, plus Wolverhampton, are a complex skein of small industrial and post-industrial towns, ranging from old established working class and ethnically mixed Smethwick to the new mostly white middle class private estates of Gornal and Sedgley.

In 1964, while the country in general swung to Labour, the party had disappointing results in the Black Country and west Birmingham, infamously losing Smethwick but also Birmingham Perry Barr, thereby halving Wilson’s majority. Swings in 1966 and 1970 went in the same direction as the nation but rather more vehemently, particularly in 1970. But then a strong swing back to Labour in February 1974 deprived the Conservatives of the position of being largest single party in a hung parliament. Surprising Labour gains in Aldridge-Brownhills, Meriden and probably Walsall South and Dudley West were enough to give Harold Wilson a four-seat lead and therefore Downing Street.

The common factor in the surprising regional swings in the West Midlands in 1970 and 1974 was Enoch Powell, Conservative MP for Wolverhampton South West from 1950 until 1974. His rather paranoid speeches about immigration in 1970 contributed to Heath’s win by detaching white working class votes from Labour, but in 1974 he repudiated the Heath government and announced that he had cast his postal vote for Labour because the party was less pro-European than Heath’s Conservatives. Since October 1974 the electoral history of the West Midlands has been a bit less dramatic, with the Conservatives gaining but not dominating in the 1980s and Labour’s ascendancy in 1997 being eroded in successive elections since.

Labour did considerably better in the West Midlands in 2012 than in 2011, with some large swings since last year in traditionally volatile seats in the Black Country and around (such as Cannock). The table shows the vote in some of the Boundary Commission’s proposed constituencies in the sub-region (2010 general election calculations by Anthony Wells). 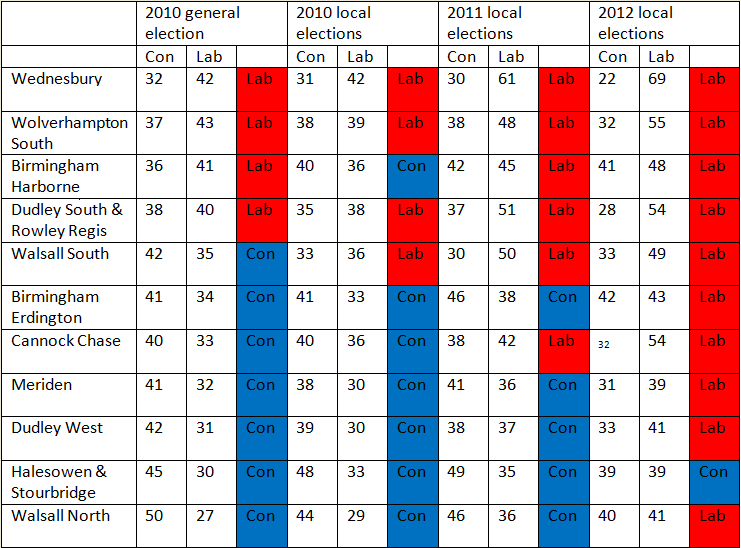 In contrast to most of the northern urban agglomerations, Labour made very limited progress in the Black Country in 2011. Then the Conservative vote held up well, but in 2012 the dam burst. With Labour’s seats in the sub-region looking pretty safe, the difference between a Labour and Conservative government may come down once again to a few Black Country seats. And here is the sting in the tail. Labour were helped to their victories in several seats, particularly around Dudley, by a strong vote for UKIP. If this were to happen in the next general election, and populist right wing votes going over to UKIP tip the election to Labour, one can imagine a dry chuckle being heard in the vicinity of Enoch Powell’s grave.