How would the main political parties gain or suffer in future Alternative Vote (AV) elections, if UK voters approve changing systems in the May 2011 referendum? David Sanders, Paul Whiteley and colleagues have authoritatively replayed the May 2010 general election. The Liberal Democrats would have been the big gainers, winning many more seats and no longer being reliant on the Conservatives alone to form a majority coalition government Two thirds of seats lost would have been from the Tories and one third from Labour.

Both before and after the general election in May 2010 many commentators were asking what the result might have been had British voters used the Alternative Vote system rather than the current ‘first past the post’ (FPTP) system. The LSE’s Simple Guide to Voting Systems makes clear that AV allows voters to express multiple preferences and can alter results in seats where the current MP does not have the support of a majority of voters. 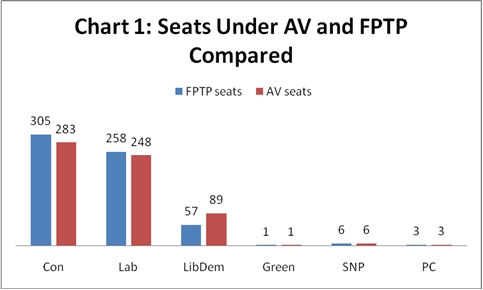 Looking a little bit closer, our second chart below shows that there would have been somewhat more underlying movement of seats, with Labour losing 19 seats to the Liberal Democrats, but also retaining 10 close-fought constituencies that the Conservatives in fact won. The Tories would only directly lose 13 seats to Liberal Democrat challengers, but would end up further down than Labour. (To see what these seats changes would have been in detail, see Annex 1 at the end of this blog). 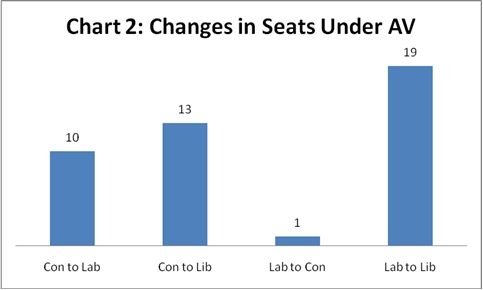 Our research is based on the responses to a large, representative survey of the British electorate conducted immediately after the general election. Some 14,000 respondents in England, Scotland and Wales were asked both how they actually voted in the election and, using a simulated ballot form, how they would have voted in a comparable AV election. The form varied across the different UK countries to reflect the distinctive party systems that now exist. In each case voters were asked to rank up to seven party candidates. We found that most of those who expressed a first preference also indicated a second preference and we used this information to produce second preference distribution ratios for each party in each country.

– Amongst Liberal Democrats in England, only 40 percent of their voters chose Labour as their second preference, and 27 per cent opted for the Conservatives, 21 per cent for the Greens and 12 per cent to UKIP.

– Over half (54 per cent) of Conservative supporters in England chose the Liberal Democrats as their second preference, 29 per cent UKIP, 7 per cent Labour, 6 per cent the Greens and 4 per cent the BNP.

We explored the possibility that the distribution ratios varied across regions or across different types of constituency but found that the ratios were very similar regardless of different contexts.

Finally we simulated the AV procedure by applying these distribution ratios to the actual numbers of votes that the different parties received in the General Election.  This enabled us to calculate an ‘AV winner’ in each constituency (apart from those in Northern Ireland) and to compare it with the actual ‘FPTP winner’.

The obvious caveat to make about all of this is that the second preference distribution ratios we used were calculated from a 2010 survey. Our respondents had not been exposed to media commentary or campaigns by political parties that might have sought to inform and even instruct voters about how to cast their second and third preferences. How people form and articulate their preference formation might prove very different when everyone knows in advance that AV is the actual ballot method.

A further complicating factor is that the experience of a Conservative-Liberal Democrat coalition government may already have produced significant changes in the second (and third) preference distribution ratios of many voters.  Studies replaying the 1992 and 1997 general elections also suggested that at these times too AV would have modestly boosted Liberal Democrat seats, but would also have helped Labour and reduced Conservative representation. However, by 2014 or 2015 coalition party voters might be more likely than in 2010 to support candidates of the other coalition party where their first choice could not win. And by this time Labour and Liberal Democrat links might be much weaker than they were in 2010.

If the referendum result returns a ‘Yes’ verdict, both the political parties and voters will need to think hard about how they can maximise their interests under the new Alternative Vote system.

Annex 1: A list of constituencies that would have changed hands in 2010 as a result of an AV voting system

The debate in the UK about codifying our constitution is now less fractious: but looking overseas can help us to understand why this discussion should continue

The UK is at a constitutional crossroads