David Cameron recently announced changes to the immigration system to deal with the perception that immigrants are taking more from the economy than they put in. One of the areas where he proposed changes was to the allocation of social housing where councils are expected to introduce a local residency test (2 to 5 years has been mentioned) which must be satisfied before someone can even go on the waiting list.

It is easy to understand why the government is making announcements on this topic – it is responding to the strength of public opinion on the issue. Immigration minister Mark Harper said: “one of the issues that really upsets people when they see somebody arrive in the country and they appear to get better treatment than people that have been there for a long time.” Feelings on this issue are running extremely high.

For example, in 2010/11 (the last year for which we have data) 22% of white respondents to the Citizenship Survey reported that they felt they would be treated worse than people of other races by a council housing department or housing association. To put this in context, the only ethnic group reporting higher levels of perceived discrimination by any part of the public sector was Blacks expressing dissatisfaction with their treatment by the police and wider justice system, a relationship that we know to be very troubled. In earlier years, the proportion of whites perceiving discrimination against them by the housing authorities was even higher, as shown in Figure 1. It was noticeably lower when first asked in 2001 which was before much of the recent increase in immigration. 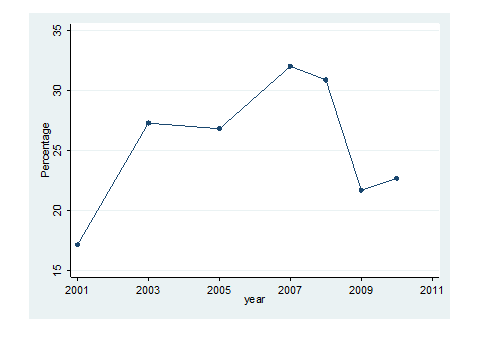 For those UK-born whites who reported that they felt they were discriminated against in the allocation of social housing, Figure 2 shows the groups who they felt were treated better than them (this is a selection of the groups receiving the highest percentages). 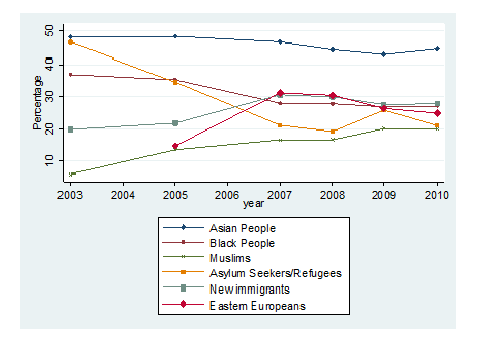 Source: Citizenship Survey, various years.  Base is UK-born whites who report they were treated worse than other groups by housing authorities.

The perception of better treatment of Asians is relatively constant through time but perceptions about other groups is quite variable. In 2003 almost 50% of respondents felt asylum seekers and refugees were treated better – this had fallen to 20% by 2010. But perceptions that new immigrants, Eastern Europeans and Muslims receive better treatment have risen.

Given these figures it is not surprising to find that a big majority of the white British population think immigration levels are too high and that one of the most common reasons given for wanting lower immigration is to reduce the demand for housing.

All of this is about perceptions – what about the reality? It should be clearly stated that there is no evidence whatsoever that there is discrimination on the current rules against whites in the allocation of social housing. There is a gap between perceptions and reality.  But it would be a mistake to dismiss the people who perceive discrimination as bigots or worse whose beliefs have no foundation in reality. It is the case that immigration has increased the population over the past decade and that this naturally increases the demand for housing, social housing included. But the supply of social housing has not responded to the increased demand. The scale of the disparity is astounding – Figure 3 shows the number of new completions. 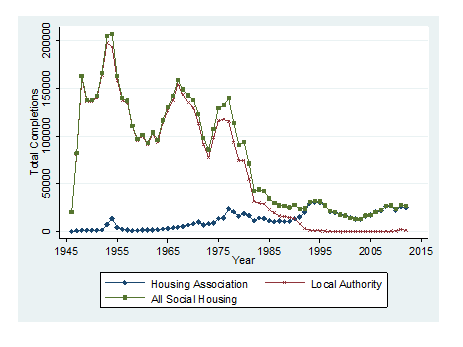 In the late 1970s about 120,000 new local authority homes were being completed each year even though this was a period when the overall population was quite stable.  By the mid-2000s this had fallen to about 200 even though this was a period of rapid population growth. Housing associations have become more important over time than councils in building social housing but they have not made up the difference – the number of housing association homes completed each year is about the same at 20000.  No wonder waiting lists have ballooned in many local authorities. So it may well be the case that immigration has reduced a UK born white’s chance of getting into social housing not because there is discrimination against them but because immigration has led to an increase in demand but the supply was not increased to match.

But there was nothing inevitable about this housing crunch. The new immigrants brought with them skills and a willingness to work and some of them could have been used to increase the stock of social housing. In fact many Eastern European immigrants worked in the construction sector and all of those Polish workers building the Gherkin or Shard in London could have been using their skills not to build skyscrapers for business but to build homes for the rest of us, perhaps even council houses. And perhaps that would have changed perceptions about the desirability of immigration as the distribution of the benefits and costs of immigration would have been very different. The big problem for the UK has been rising inequality and a side-effect of that has been that the immigrants ended up working disproportionately for the wealthiest not for the average Briton.

It would not be hard to reduce the shortage of social housing. At current interest rates councils would be able to borrow at low long-term interest rates to invest in social housing.  But they are prevented from doing so because such borrowing would be seen as adding to the government deficit though it should not really be seen in this way as it is borrowing to finance the acquisition of long-term assets. The Budget seemed to recognize the desirability of increasing house-building in general but not social housing where there seems an ideological block.

More radical would be to re-consider the level of rents in social housing which are well below market rates. This makes getting into social housing these days a bit like winning the lottery especially if one earns enough not to be eligible for housing benefit. That is a very unfortunate situation as the increased mismatch between demand and supply results in a lower chance of winning this lottery and unsurprisingly one feels worse off as a result. It would probably be a better system if the gap between market and social sector rents was lower with any difficulty in paying rent being met through the housing benefit system.  Social housing would then be valued for the increased security of tenure it offers more than the lower rents. That would then also raise some resources to help to increase the stock of social housing.

We have set up a system in which immigrants and natives are forced into conflict over access to a limited supply of social housing. But the conflict is not inevitable – it is the result of policy. The solution is not to try to reduce the demand from immigrants to social housing through the measures announced by David Cameron (that will probably have very little impact and hence do little to alleviate the problem). The solution is to find a way to build more housing in general, social housing in particular. Polish Plumbers to build the People’s Pads should be the slogan.

Alan Manning is head of the Department of Economics and director of the Labour Markets Programme at LSE’s Centre for Economic Performance.

Posted In: Housing | Public Services and the Welfare State