Ireland will hold a referendum on 22 May on a proposed amendment to the Constitution of Ireland which would permit same sex marriage. Éidín O’Shea writes on the referendum campaign, which has seen all major parties in the country support a Yes vote. She notes that while opinion polling shows strong backing for the proposal, the vote could nevertheless be closer than the polls predict.

On Friday 22 May Ireland will be asked to vote Yes or No on the following proposed amendment to Article 41 of the Constitution:

Marriage may be contracted in accordance with law by two persons without distinction as to their sex.

As an Irish citizen living in Australia I have been frequently asked as to why Ireland has to have this referendum: could it not be passed in parliament via legislation? The answer is that the Irish government cannot introduce any legislation that conflicts with the Irish Constitution. If the government wishes to change or amend the constitution it must hold a referendum.

The referendum follows on from Ireland’s introduction of civil partnerships in January 2011. Campaigners for civil marriage have argued that there are 160 statutory differences between civil partnership and marriage, mainly in the areas of taxation, children and adoption. The most pressing of those issues involves adoption rights for same-sex couples. The matters relating to children and adoption were addressed in the Children and Family Relationships Bill, which was passed in parliament and came into law on 6 April 2015.

There has been a significant attitudinal shift in Ireland from its founding in 1922. The state was defined with the ethos of establishing a model Christian country. That religious influence did not stop at the content of public policy on marriage, divorce, contraception, and health services; the church itself was deeply embedded in the operation of social services that developed in post-independence Ireland. More recently, since the 1990s the control and influence of the Catholic Church has been greatly decreased following the publication of no less than 14 high-profile and damaging reports into the abuse and exploitation of children in church-run orphanages, industrial schools and parishes. Since that time there has been a significant policy focus on removing the link between church and state.

Ireland is the first country in the world to hold a referendum on marriage equality. The opinion polls suggest as many as 78 per cent of people are in favour of altering the constitution, however referendums can often result in unexpected outcomes in Ireland so opinion polls generally come with a warning. It is expected that the final figure will be much closer. One significant factor for the vote is that Irish citizens living abroad cannot be entered on the register of electors. In the period between April 2009 and April 2014, a total of 123,800 Irish citizens left the country, yet these individuals have no rights to vote in any Irish elections or referendums. Despite this, the campaign has mobilised a huge response from Irish citizens living abroad using social media to urge people at home to vote for them using the #‎BeMyYes hashtag.

Campaigning is now in full flow with both sides agreeing that the referendum will be won by whoever does the best job of convincing “middle Ireland” and in particular those in rural Ireland. All the major Irish political parties – Fine Gael, Labour, Fianna Fáil and Sinn Féin – are campaigning for a Yes vote. Even the Anti-Austerity Alliance (AAA), a collection of elected members of parliament, councillors and activists who have campaigned against the government on a number of issues, is supporting the referendum. The AAA is actively campaigning for a Yes with the campaign tagline ‘Yes to Equality 2015-2016 Vote against Austerity’.

This all party support is a remarkable shift, particularly for Fine Gael and Fianna Fáil, which have historically been more conservative on social issues. Fine Gael’s leader Enda Kenny, the longest serving member of the Irish parliament, and current Taoiseach (Prime Minister), had previously insisted he did not want to be “pressurised on marriage equality”. But Kenny has since talked about his own “personal journey” to be now in the position where he is campaigning for a Yes vote. Speaking at the launch of Fine Gael’s Yes campaign, Kenny outlined his reasons as follows:

Kenny became the first Taoiseach to visit a gay bar in December 2014, attending his party’s lesbian, gay, bisexual and transgender group’s Christmas celebration, the significance of which cannot be overlooked. Adding to this has been the visible coming out of current and former members of parliament, most notably Leo Varadkar the current Minister for Health who has stressed he would be ‘absolutely devastated’ if the vote was defeated. He noted at the Fine Gael launch that:

These arguments focused on fairness have been the catalyst for the Yes campaign so far, which has received support from youth organisations, multinational corporations, and trade unions lead by Yes Equality, an umbrella civic society group. The Yes Equality side have used a number of innovative campaigning methods to capture attention, most notably via social media. Searching for hashtags such as #marref, #YesEquality, #MakeGraTheLaw is a good way of viewing how the Yes side have mobilised people to knock on doors and campaign locally. There has also been plenty of celebrity endorsement, including from the ‘mammy in chief’ Mrs. Brown, whose video advocating a Yes vote received over 240,000 views in its first week.

Even though the referendum is not about parental rights, the debate about it has so far largely focused on children and defending the traditional view of marriage. The most visible presence in the No Campaign has been the Iona Institute, a religious think-tank, and an organisational grouping titled ‘Mothers and Fathers Matter’. At the group’s campaign press launch, they made unsubstantiated claims that children who were raised without a father were more likely to end up as criminals.

Another group known as the Alliance for the Family and Marriage have distributed leaflets claiming that ‘active homosexuals’ contract cancer, dying 20 years sooner than average and have a tendency to abuse their own children. The Catholic Church is also starting to organise a No response with Archbishop of Dublin, Diarmuid Martin, stressing that there was a ‘fundamental complementarity between a man and a woman’. How this message will be stressed from the pulpits and beyond will be interesting to observe.

The Yes result of this referendum will depend greatly on whether people transfer their ‘like’ on social media sites to the ballot box. It is a fascinating campaign to watch and as it enters the final weeks the world is watching how Ireland votes. It is a watershed moment for marriage equality.

Note: This article was originally published on the LSE’s EUROPP blog and gives the views of the author, and not the position of the British Politics and Policy blog, nor of the London School of Economics. Please read our comments policy before posting. Featured image credit: William Murphy (CC-BY-SA-3.0)

Éidín O’Shea is a Research Officer at the Centre for Local Government in the University of Technology, Sydney. She is on Twitter @EidinNiShe 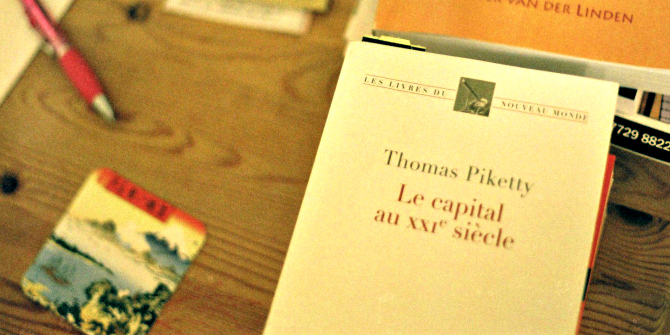