The Equality and Human Rights Commission have a statutory duty to regularly report on the state of human rights and equality in the UK. Based on the Commission’s latest review, ‘Is Britain Fairer?’, Janna Miletzki and Hazel Wardrop write that while formal political representation is more diverse than in 2010, the findings for informal participation are mixed.

At the same time, the gender balance was better in the Scottish Parliament (34.9 per cent) and the National Assembly for Wales (41.7 per cent) and while a 20-year-old also gained a seat in Westminster in 2015, the average age of MPs has remained unchanged since 2010 (at 50 years). 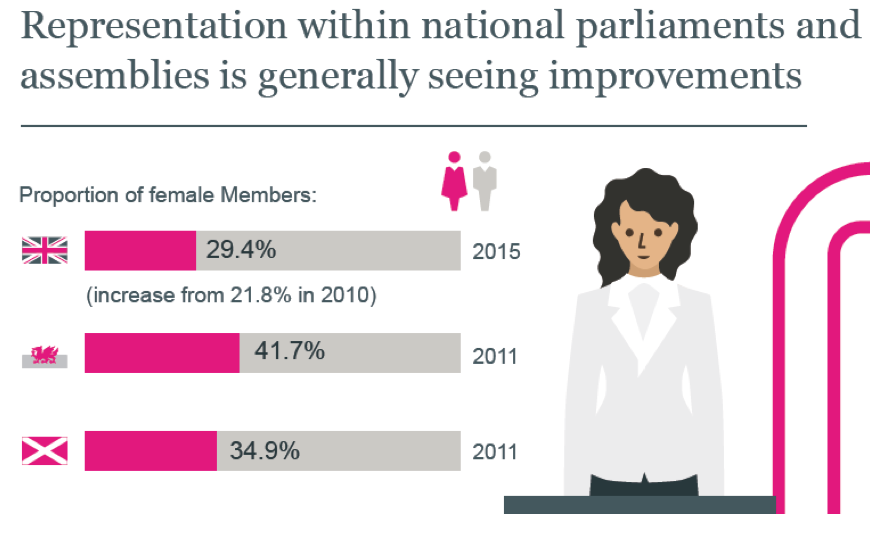 At a local level, younger people, women and ethnic minorities continued to be underrepresented across Britain. Surveys of local councillors in England between 2008 and 2013 showed that the representation of younger people at the local level was decreasing while there was not much progress in terms of ethnic and gender imbalance. In Scotland and Wales, the majority of local councillors were white, male and older.

It’s worth noting that the provision contained in the Equality Act 2010 that would require political parties to report on the protected characteristics of election candidates has not yet been implemented. Doing so would improve the data available and, by increasing transparency, could encourage political parties to do more to promote more diverse political representation.

Participation in other political activities

Overall, the level of political activity increased in Scotland but fell in England. In England, the percentage of people saying they were involved in a political activity (defined as contacting a councillor, local official, government official or MP; attending a public meeting or rally; taking part in a demonstration; or signing a petition) fell from 39.1 per cent in 2007/08 to 30.1 per cent in 2013/14. Young people (19.1 per cent), Black (21.1 per cent), Indian (19.7 per cent) and people from ‘Other’ ethnic groups (12 per cent) in England were less politically active than older and white people in 2013/14. However, a higher proportion of gay, lesbian, and bisexual people (45.3 per cent) participated in a political activity compared to heterosexual people (30.2 per cent) in 2013/14. The full evidence paper and data tables can be found here.

According to the Scottish Social Attitudes Survey, 60.9 per cent of respondents said in 2013 that they had carried out a political activity (a rise from 54.4 per cent in 2009). But as in England, young people (48.6 per cent) and ethnic minorities (45.9 per cent) in Scotland were less likely to be politically active than older people and white people in 2013.

Politics is not just about the type of people who hold political office, but also the policy choices they make when in a position to do so. In too many cases, the quality of those choices may be impaired by the lack of reliable data upon which to base them. The impact this can have on vulnerable groups of people, experiencing disadvantage, discrimination or exploitation, is to render them and their experiences virtually invisible.

Data gaps have opened up, for example, when public authorities stopped running surveys and also when survey questions have grouped people in wide categories, which do not capture the nuances of our society. This is the case for data on disability, where often a distinction is only made between disabled and non-disabled people without taking into account the nature of their impairment.

Ethnic groups are also combined in different ways, sometimes showing Bangladeshi and Pakistani in a single group, African, Caribbean and Black people in one category and White people of different nationalities again in one group, even though their experiences might differ substantially. Furthermore, there is little data available on either transgender people or Gypsies and Travellers.

Our latest report examines how Great Britain has progressed over the past five years in terms of equality and human rights. Here, we have presented some of our findings relating to the political representation of women, young people, ethnic minorities and lesbian, gay and bisexual people, but the report features findings across other characteristics protected under equality law.

The report has highlighted that an ongoing challenge is participation in political life for many groups, from under-representation in political arenas to the likelihood of taking part in activities like signing a petition. Another challenge is the lack of data and the invisibility of some groups in the evidence base. This is a huge area of concern as it can hide those who are in the most vulnerable situations and the issues affecting them from those who shape policies and services. Only if we gather the right information can we identify the scale and nature of discrimination and disadvantage. ‘Is Britain Fairer?’ will influence the future work of the Commission and, we hope, other statutory and non-statutory organisations that have a role in making Britain a fairer society.

Note: the above findings form part of the Equality and Human Rights Commission’s new statutory report ‘Is Britain Fairer?’, which brings together evidence on the progress of equality and human rights in Britain during the last five years. The article represents the views of the authors and not those of the British Politics and Policy blog nor of the LSE. Please read our comments policy before posting.

Homelessness is rising as benefits are cut

We should be cautious about televising trials as they would do little to bolster public faith in the judicial system and provide for open justice. Alternative solutions should be sought